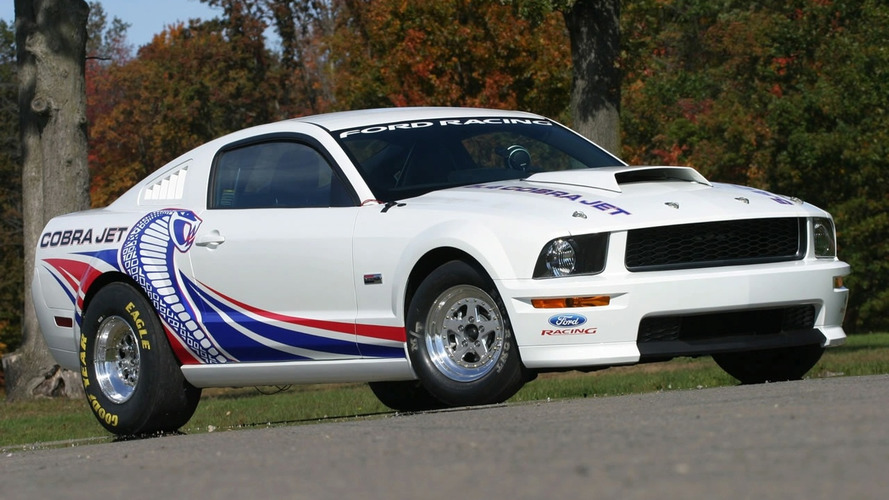 Ford Racing will be bringing the 2008 Cobra Jet Mustang to SEMA. The Cobra Jet is a drag racer, the latest in a series of race versions of the Ford Mustang, and debuts at SEMA today.

Despite the problems Ford is experiencing right now, such as the utter and complete meltdown of its domestic market, it's still making the Ford Mustang just a fun car.

Ford Racing has released a slate of race-ready Mustangs and this latest is what Ford calls the FR500CJ, and what we, who prefer names rather than soul-less numbers to describe things, will know as the Cobra Jet.

This latest Cobra Jet harkens back to a better time for Ford -- a time when it held a considerable lock on its share of the US market. More specifically 1968, when Ford won the NHRA Winternationals with its then Cobra Jet and helped solidify the Mustang as a legendary American sports car. Only 50 of those original Cobra Jets were built and if you happen to have one in your garage right now, then you won't have to worry about the current global recession hitting your local economy.

Also, you can order one of these at your local Ford dealer. Which, at least, means that Ford is serious about putting these cars out there and not just up for show at SEMA.

Oddly, Ford Racing doesn't yet provide any (real) numbers on performance. But you can guess it comes with some tweaked variation on the 4.6L V8 found in the Mustang GT, which produces about 325 hp.