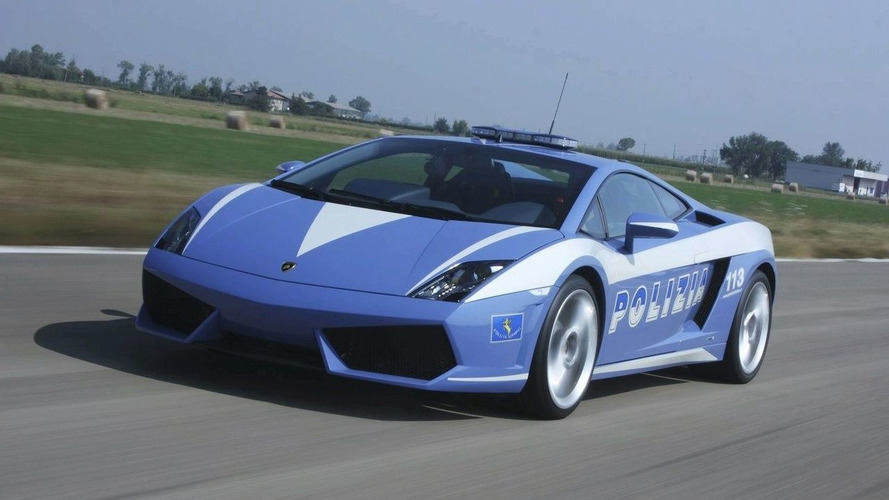 The Italian State Police department has taken delivery of its third Lamborghini Gallardo, donated by the factory as a patrol car.

On the one hand, it’s a good way to ensure that drivers toe the line on Italian roads. On the other, some people might just intentionally flaunt the law in central and Southern Italy just to get a closer look at the new Gallardo LP560-4 Polizia. The police-prepped Gallardo was recently donated to the Italian State Police at the Viminale Palace.

Replacing the 2004 Gallardo that’s seen 87,000 miles of patrol duty and emergency medial transport in and around Rome, the LP560-4 Polizia goes into service immediately with the Lazio Highway Police Department.
The distinctive, “blu Polizia” paint job is accented by white stripes that follow the contours of the Gallardo’s body, and the roof lights are specially designed to take the car’s speed capability into account.

The 560-horsepower, 203-mph supercar serves as more than just a visible tool for deterring speeders. It’s a fully functional squad car, with radio, holster, cardiac defibrillator and other safety equipment. The police Gallardo is equipped with a state-of-the-art onboard video unit called the “Proof Video Data System.” An in-car camera is linked with a GPS receiver that can transmit images and information on the Gallardo LP560-4 Polizia’s location to the nearest police station, as well as accurately calculating the speed of the vehicle that’s being pursued. Stolen-car and other criminal information can be transmitted quickly and efficiently. Want to argue that you’re innocent? The “Proof Video Data System” features a portable screen on which an officer can show you exactly why you’re being cited.

In addition to running down speeders, the Gallardo LP560-4 Polizia can be used for emergency medical transport. The car’s front luggage compartment has been fitted with a refrigeration unit, allowing it to carry donor organs from hospital to hospital with extreme urgency.

The Gallardo LP560-4 Polizia is the third Gallardo police car. The first two have clocked 87,000 and 65,000 miles respectively to date, and have been remarkably reliable with no reported service visits other than routine maintenance.