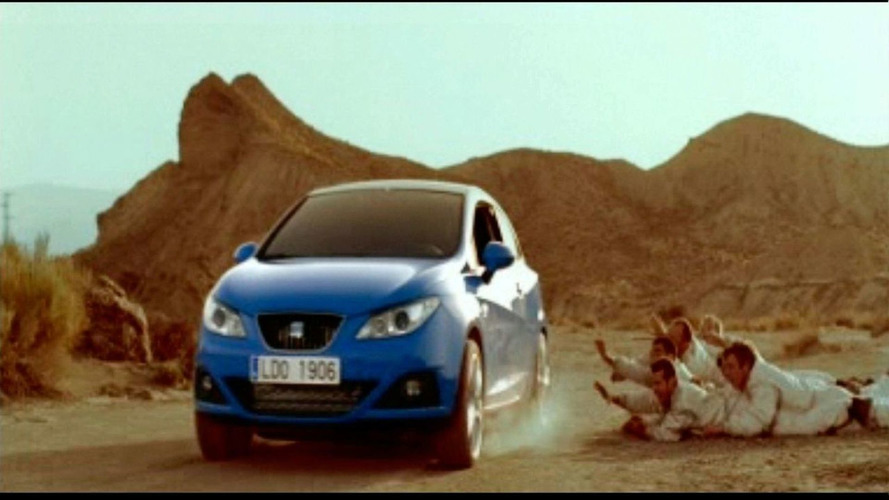 Despite the funny imagery of the pompous racers being beat down to the dirt, the clip never comes full circle by revealing the glamorous female driver. Thank goodness for the press release...

SEAT UK has announced its latest cinema advertising campaign which takes a tongue-in-cheek approach to the irresistible appeal of the new Seat Ibiza SC. With the tagline ‘There can be only one driver’, the clip shows SEAT's top male motorsport stars sprinting for the keys to the new car. They’re filmed scrambling for the driver’s door, only to be beaten to it by a glamorous woman who takes off in the car and leaves the race aces face down in the dirt. As the mystery woman pulls away victorious, she flips the bird out the window to the defeated fellows.

Despite the funny imagery of the pompous racers being beat down to the dirt, the clip never comes full circle by revealing the female driver. Thank goodness for the press release we can inform that it is Christina Surer – a 34-year-old Swiss racer who pilots a 185 PS SEAT Leon in the German touring car series.

SEAT UK National Communications Manager, Rob Taylor, spoke of the new cinema advert: “We really wanted the Ibiza SC ad to be irreverent – a humorous, fun bit of entertainment. It will run alongside films playing to a mature audience and I’m confident the million or so cinema-goers who will potentially see it over the next few weeks will appreciate the humour, as well as the stunning new Ibiza SC.”