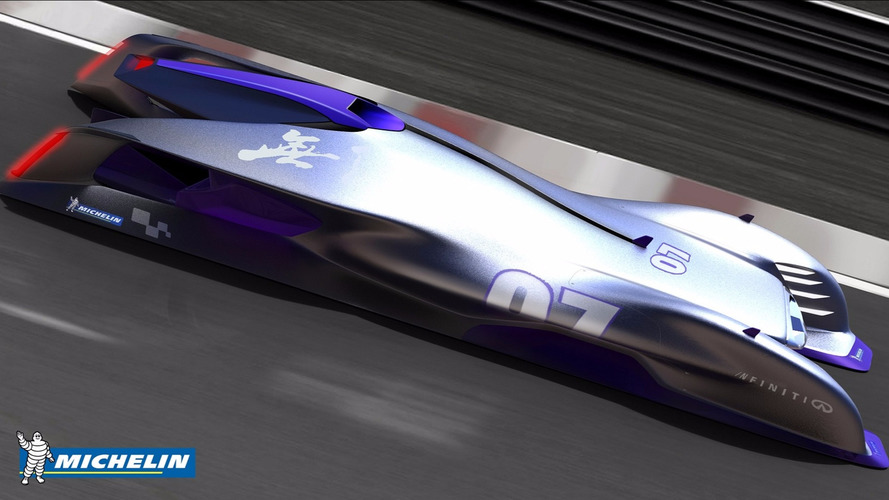 Some amazing ideas have come out of the Michelin Challenge Design.

2030 is just 14 years away, which is no time at all. But it is an eternity in racing, especially as technological development is running at a pace that couldn’t have conceived of as recently as 2002, which was just 14 years ago.

This year’s edition of the annual Michelin Challenge Design competition asked entrants to imagine what a Le Mans race car would look like in 2030. And some of the ideas are truly astonishing, unlike anything that has ever been seen before. And yet, because technology is developing so quickly, (some) of them have a ring of plausibility.

First place went to Tao Ni from China for his entry, Infiniti Le Mans 2030. Its flowing, low-drag body contrasts with the sharply angular aero elements at the rear, which incorporate vertical rudders to aid cornering. It also features an electric drivetrain powered by “graphene technology” batteries, and treaded “auxiliary tires” that pivot out from the wheel to provide more grip in corners. But the centerpiece is an autopilot system that takes over from the drivers at night.

Daniel Bacelar Pereira from Portugal was awarded second place for his Bentley 9 Plus Michelin Battery Slick concept. Bentley’s traditional grille is echoed at the front of the highly aerodynamic body, while the driver does his work in a virtual reality cockpit, which gives panoramic views of the track. Power comes from “Battery Slick” tires, airless tires which integrate the batteries into the rim. That means they can be changed during pitstops, thereby eliminating concerns about range.

Third place went to Canadian Kurt Scanlan for the Cierzo C1. Its front “pontoons” may make it look like praying mantis, but they are the key to the car’s handling. They are made from “electroactive polymers”, plastics that change shape when a current is passed through them, i.e. when the steering wheel is turned. But rather than turning the wheels, the steering causes the pontoons themselves to bend in the chosen direction and it is the air rushing between them that actually turns the car.

Over 1,600 entries came in from 80 countries to be judged by design heads from automakers including BMW, Ford, General Motors, and Nissan, and other design experts.

Jury chairman Stewart Reed, of the Art Center College of Design, said: “We as jurors all agree that this year’s entrants were the highest quality and the most exciting ever. We were looking for something super creative and artful, and at the same time something that would draw in new science that would be relevant for future car development.

“Whether that science is about new materials, chassis dynamics, new powertrains, lightweight structures or aerodynamics, we saw lots of solutions that touched all of these topics.”

These designs certainly allay any fears that the road and race cars of the future will become boring.