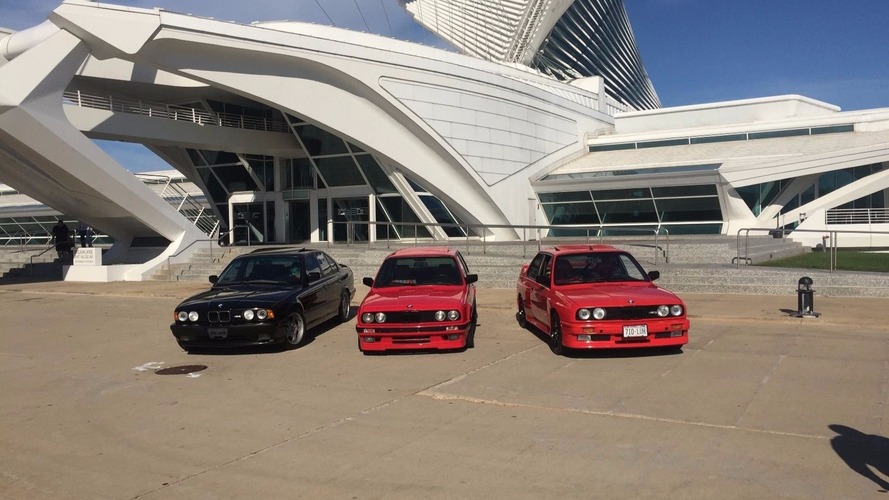 One Wisconsin man has created an impressive BMW collection and is now (regrettably) offloading them all on eBay.

Life has many twists, turns, and even u-turns, but for one enthusiast, his goal of creating his own BMW holy trinity remained true through it all. A recent trio of auctions that popped up on eBay features some of the most legendary products that the Bavarian marque has produced including an E34 M5, E30 M3 and the "baby M3," 325is. All cars have been modified tastefully in some way and we wanted to investigate why this impressive collection was up for sale and the path to assemble this collection.

Owner Justin Sciacca of Brookfield, Wisconsin, has been collecting this BMW holy trinity for some time now and his passion for these platforms started at a young age.

"I fell in love with the lines of the [BMW] E30 when I was 13 or 14. I grew up with my Grandfather in the house, and went to a lot of classic car shows with him, so always loved the older/boxier looking cars," Sciacca said. "I begged my mom and dad to get me a 325is but they said that was too much car for me, so I inherited their 1980s beater Golf instead."

Staying true to his goal of owning a classic 3 Series BMW, he didn't stop looking for a clean E30. When Sciacca was about to graduate achitecture school at Cooper Union in New York City, his parents leveled up with their grad gift and delivered with a mint 1990 BMW 325is, which they paid $8,500 for.

Living in New York City was fine until 9-11 hit and the decision to move back home was made but not before Sciacca scooped up a rough E30 M3, it had a clean title but needed plenty of TLC. With that, the journey began on bringing the M3 back to life with the 325is staying on daily driver duties. With two in the stable, he had another acquisition he wanted to make before he embarked on building them up to the spec he wanted.

"I had saved up enough money to buy a clean (E34) M5 for my dad and mom as a sort of 'thanks for always Supporting me' gift. My dad almost never drove it, and babied the crap out of it! I had to twist his arm a bit to do the Dinan 3.9-liter Stroker conversion, because he doesn't like to mess with his M5," Sciacca said. "But European E34 M5s came with 3.9-liter engines, so I explained to him technically he was just putting his M5 back to original-spec, so he agreed to do the Dinan. He absolutely loved the additional horsepower and torque and said the car had come alive." he added.

Sciacca grew attached to the M3 and has even named her Lily, but says in the eBay ad you can change it if you want.

With the M5 converted to a Dinan, the focus was on the E30 M3 to improve the suspension, wiring and cosmetics with a fresh coat of HennaRot red paint. Originally the M3 was BrillantRot but Sciacca expains that's the best color for the E30 M3.

Sciacca grew attached to the car and has even named her Lily, but says in the eBay ad you can change it if you want. He is most fond of this car and says it handles better than stock and added "it revs and runs like it's still 1989" in the description.

As the project neared completion, the clutch went out on the 325is and the family opened up a can of worms instead of a simple clutch job. The father and son team decided to stuff a potent S38 inline-six motor found in the E34 M5, into the lighter and more nimble E30 chassis. They put together custom motor mounts from Germany, custom trans mounts, a custom driveshaft, a custom radiator and all kinds of wiring. Although it was perfect balance and had all kinds of power at any RPM for the E30 over many years, Sciacca decided to pull the motor swap for the impending eBay sale citing no one would pay what it was worth.

All three of these classics that formed one man's BMW dream collection provided years of joy behind the wheel. But as Guns 'N' Roses says "nothin' lasts forever..." and Sciacca switched direction from a design career to one in the culinary arts. As such, with dreams of opening a bakery, his BMW holy trinity collection is up for sale. The 1991 BMW M5

are all fairly clean examples and can be had for less than the price of a new BMW M5.

Although, we'd like personally to see a E24 M6 versus the 325is to form our own holy trinity, this is one collection with an interesting story and definitely one to check out.