When you think of American muscle, you think of none other than the Ford Mustang (...or Camaro, or Challenger). The two have been virtually synonymous since the car's introduction in 1965, but it wasn’t until later in that same year that newly-introduced pony car would get some serious performance chops. A man by the name of Carroll Shelby would put his special touch on the legendary muscle coupe, and the rest… well, you know the story.

In 1970, fresh off of five years of success, Shelby and Ford would introduce their most potent Mustang iteration to date. The 1970 Shelby GT350 Fastback would be the last of its kind, pending stricter U.S. environmental laws, Ford was required to end production of its legendary race car for the road or otherwise face some serious fines.

Just 789 examples of the GT350 were produced for the 1970 model year. Nearly all of the 1970 examples were essentially leftover from the 1969 model year, and were given new VIN numbers under the strict supervision of the FBI. That 'last-of-its-kind' detail makes it a more than desirable piece among collectors. 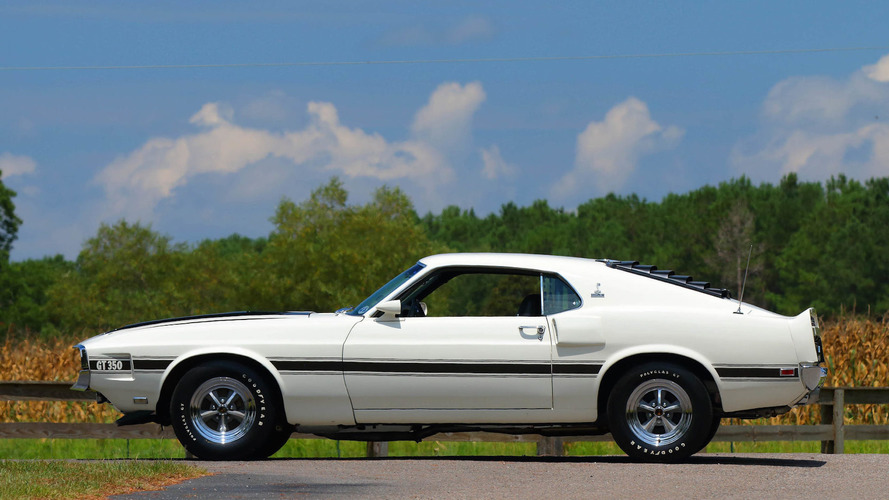 One of the last of the last produced, this particularly rare example is coming up for auction between November 2 and 5. It will be part of the 2016 Mecum Dallas sale, and features details like its original factory invoice, Shelby order forms, buck tag, and Marti Report, just to name a few.

The design features a handsome Wimbledon White exterior finish with black and grey side striping and a Black Deluxe Shelby leather interior with red carpeting and wood accents. Period-correct 15x7-inch Shelby Mag wheels can also be found, as well as a factory original front chin spoiler and a pair of hood stripes exclusive to the 1970 model year.

The engine has been given a full restoration and pairs with a four-speed Toploader transmission. Early estimates suggest it could go for anywhere between $80,000-$100,000 when it crosses the auction block next month.

According to its listing in the Shelby American Automobile Club’s “Shelby Registry: 1968-70,” this Wimbledon White 1970 Shelby GT350 was originally invoiced to Rusty Eck Ford in Wichita, Kansas, but was shipped to Turner Ford in the same city. Completed at the contracted A.O. Smith final assembly facility in late 1969 as Shelby Mustang production came to an end, this GT350 is among the last of the Shelby Mustangs. By the late 1960s, the writing was on the wall and a decision was made to discontinue the Shelby Mustang. Restrictive emission requirements and higher insurance rates were putting the squeeze on performance cars, not to mention the fact that Ford had introduced in-house Mustang competition—Mach 1 and Boss models, in particular—to Shelby’s GT350s and GT500s, which had become more sport/luxury compared to Shelby’s rough and tumble 1965 GT350. When it became obvious that the last scheduled Shelby builds would stretch into the 1970 model year, the decision was made to update the final cars as 1970 models with front chin spoiler and black hood stripes. Only 789 were produced and supplied with revised 1970 VINs, even though they had 1969 characteristics like the dash-mounted ignition switch, non-locking steering column, and door panels with rectangular remote mirror bezel. With its 290-horsepower 351 Windsor 4-barrel engine, 4-speed transmission, and standard Competition Suspension, this White 1970 Shelby GT350 perfectly fits Shelby’s “Road Car” marketing. Detailed to Mustang Club of America Gold specifications, the small-block Shelby maintains its original Ford sheet metal along with the unique hood stripes, chin spoiler, and correct 15x7 Shelby Magstar wheels with period Goodyear Polyglas GT tires. The GT350 is documented by its original buck tag, factory invoice, Shelby order forms and Marti Report.