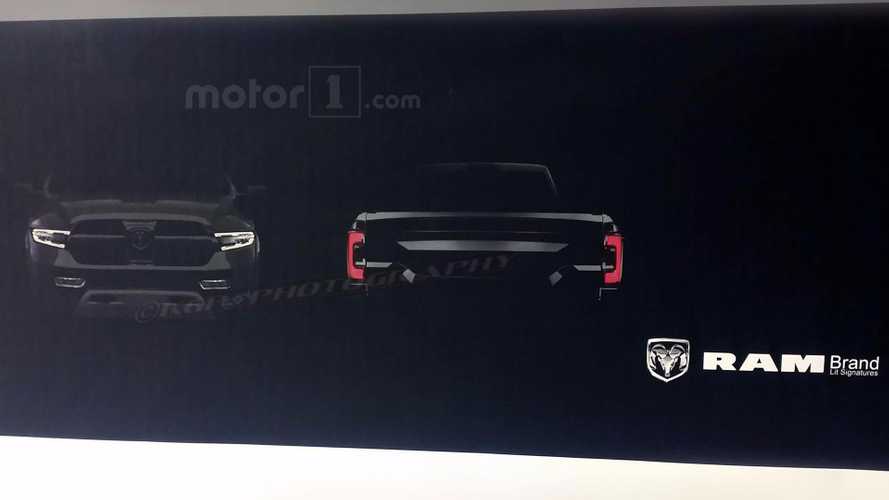 Ram’s pickup truck will get a sleeker, more chiseled look in a few years’ time.

These photos are likely our first glance at the next generation of the Ram 1500, the next major update to the company’s pickup truck. Like the Jeep Wrangler and Grand Wagoneer shots we saw yesterday, these images come from an attendee at a dealer presentation who clandestinely snuck photos of a poster at the event.

From what we see here, the 2019 Ram 1500 will have a sleeker and more streamlined look than today’s truck. Though the giant crosshair front grille remains, the hood is narrower and tapers toward the front of the vehicle, while the squinty, angular headlights have prominent LED outlines – the poster refers to them as ‘Lit Signatures’ – recalling the striking look of Dodge Charger headlights.

From behind, bracket-shaped taillights bookend a more sculpted tailgate design. Inset creases and depressions in the tailgate design give it far more definition than on the current Ram 1500.

Not much concrete information is known so far about the next-gen Ram 1500, but our source says it won’t debut until the 2019 model year. A product presentation from Dodge previously showed a “Light Duty major update” planned for Ram for the 2017 calendar year. It’s also rumored that the current electronic rotary shifter may be nixed in favor of a more traditional column shifter.