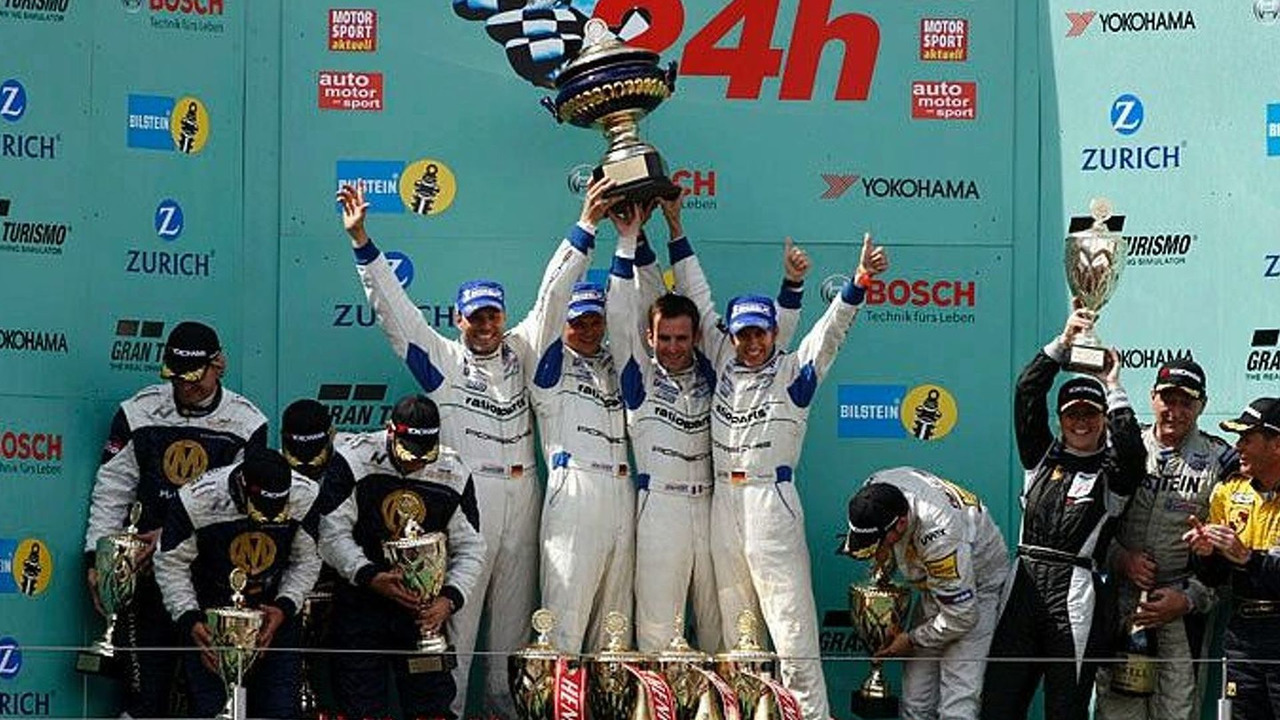 The 36th ADAC Zurich 24h Race at the Nürburgring reached its denouement with a third consecutive overall victory for team boss Olaf Manthey to add to his wins in 2006 and 2007.

The Manthey Porsche 911 GT3-RSR (#1) and Manthey Porsche 911 GT3-MR (#23) made team boss and former DTM driver, Olaf Manthey, a very proud man as they crossed the finish line in one-two formation. This victory marks Manthey as the only team in the history of the race to win three consecutive years adding to wins in 2006 and 2007. “This hat-trick of victories is the crowning glory of my career as a team boss,” beamed Olaf Manthey, but it was not without incident as the yellow and green number 1 Porsche plunged into the pits on the first lap as a result of a fault in the cooling system. With no other problems to follow, the GT3-RSR worked its way through the field to capture lead position at 03:30 in the morning. The second place 911 GT3-MR is no stranger to victory as this car won in 2006 for Manthey. Third place went to Frikadelli Porsche piloted by Klaus Abbelen, Dr Edgar Althoff and Kenneth Heyer along with notable two-time Nürburgring 24h winner, Sabine Schmitz, who is also famous for her BMW M5 Nürburgring taxi rides and appearing in TV episodes of “Top Gear”. As the only woman to make it to the podium, Schmitz is widely held as the most successful female driver in the history of endurance racing.

Bad news for the Sport Auto Audi R8 contender. After an accident on the second qualify session the previous day, the R8 unfortunately never made it to the starting grid. As a competitor in the Porsche 997 dominated SP7 class with the likes of the Manthey 911 cars, it could have made for a different outcome. The Sport Auto Audi R8 vows to return.

Also turning heads was former Formula One driver, Heinz-Harald Frentzen, and his hybrid-powered Gumpert Apollo. Eleven minutes into the race, the transmission malfunctioned which resulted in no forward drive. With hopes of finishing the race gone and anticipation of a huge repair time, Gumpert technicians pressed on and finally fixed the Apollo. With the support of race officials, Frentzen managed to get back on the track for the final 90 minutes. Frentzen at the finish. “You can look at our result in two ways. On the one hand, we had two lots of problems with the gearbox in the conventional drive system. But, from a different perspective, the brake energy regeneration concept exceeded our expectations.” Aston Martin was another big winner making the best-ever finish at the Nürburgring 24 Hours with three V8 Vantage N24's taking the top three positions in the class.