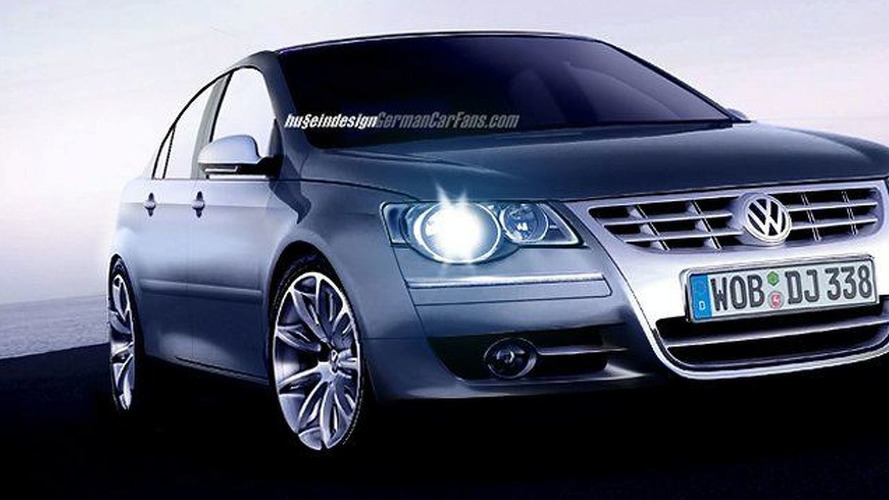 Related content:
EDIT (March 04 2005): New VW Passat In Depth - 110 new photos attached The next generation Passat is set to arrive in early 2005. The new Passat will ride on a modified and lengthened PQ35 platform called PQ46. The PQ46 uses a transversely mounted engine instead of the current longitudinal layout. Suspension is by MacPherson front struts and a multilink arrangement at the rear. The 6th generation Passat will compete against the entry level BMW 3 Series and Mercedes-Benz C class, instead of D segment cars like the Ford Mondeo and Opel Vectra. The new grill and front will eventually appear on all future Volkswagen models except the Golf and Polo, since these 2 models are icons and will remain so. The general styling of the new Passat is a good indication of what to expect from VW in the next few years. The PQ46 architecture will also spawn the Passat wagon due in summer 2005 and a new Sharan van in 2006. The overall size of the new Passat will remain basically the same to the current car, but with the new engine layout, allows for a shorter hood and longer wheelbase. The longer wheelbase liberates more space inside and in the trunk, where 500 litres is the rumoured volume. Interior quality is expected to remain high with soft plastics and new electronic gizmos. The engine line-up is also expected to change drastically, with VW ditching the V6 engines and the slow selling W8. Buyers can expect 4 gasoline engines and 3 diesels. The gasoline engines include a 1.6 litre 8v with 115hp, a 2.0 litre 16v FSI with 150hp, a 2.0 litre 16v FSI turbo with 200hp, and finally a 3.2 litre 24v VR6 with 250hp, with FSI arriving in 2007. The diesel line-up includes a 1.9 litre 8v TDI with 105hp, a 2.0 litre 16v TDI with 140hp, and a 2.0 16v TDI with 160hp. Five and six speed gearboxes will be offered depending on the engine, while the six-speed DSG transmission will be optional. The Passat will come standard with front wheel drive with all wheel drive as an option. Prices should remain close the current car.