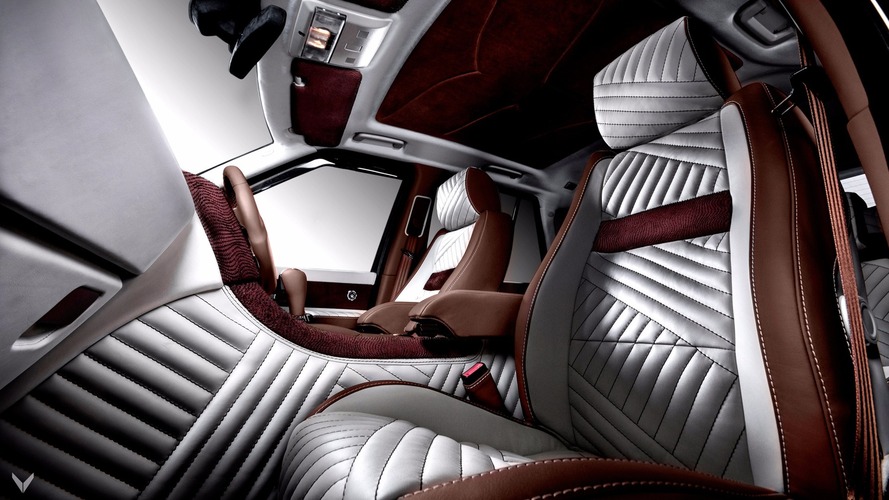 A Range Rover Sport that was once a prize given to the winner of Britain’s Got Talent has received a makeover with a new interior by automotive outfitter Vilner.

The TDV8-engined RRS was originally awarded to the winner of the 2009 edition of BGT, dance troupe Diversity, ready-modified with a bodykit and 22-inch wheels by British firm Barugzai. The troupe subsequently sold the car to raise some money.

It is still with the second owner, who decided the largely standard interior was in need of a refresh. So he took it to Bulgaria-based Vilner, who really went to town on it, and gave it their 20th anniversary seal. Which is actually a little badge the door panels and steering wheel.

The interior has been swathed in Milk White and Chocolate Brown leather upholstery. Not just the seats, but the door panel, dashboard, and center console plastics, too. A sort of “cross hatched” pattern formed with contrasting stitching finishes the leather work off.

Vilner is most proud, though, of the “thinned” alcantara that adorns the center console edges, air vent surrounds, door panels, and small areas of the seats. The technique gives the material a 3D, deep-pile effect like a carpet. Vilner doesn’t go into detail about how the effect is achieved, but it looks as though small areas of fibres have been scraped into peaks. It won’t be to everyone’s taste, but it’s certainly interesting.

Elsewhere, hard plastics such the steering column shroud and dashboard sides have been trimmed in black alcantara, and illuminated door sill plates added. A matching purse comes with it, as well.

The exterior has been left untouched, apart from the wheels which have been refinished in gunmetal gray.

The engine is untouched, too. Still, the 3.6-liter, V8 turbo diesel motor serves up a perfectly healthy 272 horsepower (203 kilowatts) and 472 pound-feet (640 Newton meters) of torque.