2018 Alpina B5 pushed hard on the demanding Nurburgring 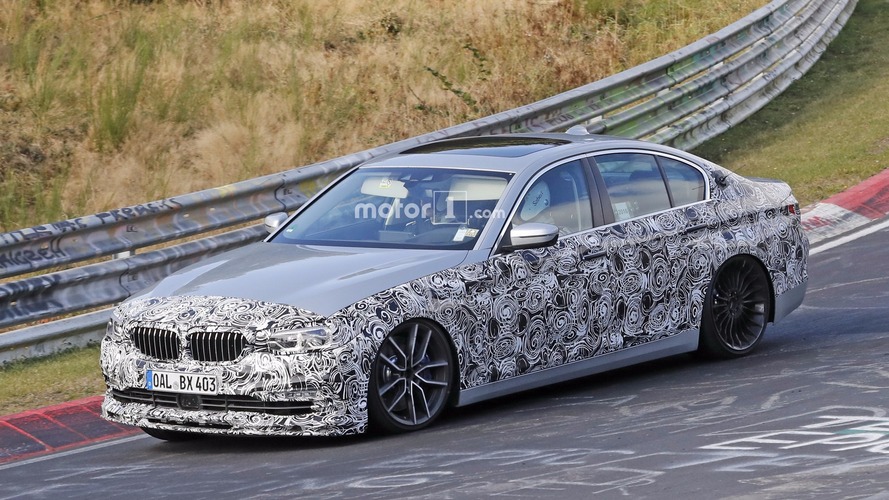 The BMW M5 Sedan's alter ego was spotted on the Nordschleife during some fast-paced testing sessions.

If the new M550i xDrive is not enough to quench your thirst for power, there are going to be two solutions to your expensive problem: BMW’s new M5 or Alpina’s B5. Seen here is the latter while tackling the ‘Ring with a slightly modified body and four exhaust tips sticking out of the rear bumper to tell the whole world it’s not an ordinary 5 Series. Lurking behind those mismatched wheels are the usual factory blue Alpina brake calipers noticeable only on the front axle.

The test vehicle doesn’t have all of the production bits and pieces, but the new B5 will carry on Alpina’s tradition by featuring only subtle tweaks over the BMW version. Since we’re not holding our breath for the return of the beloved M5 Touring, it means Alpina will once again offer a viable substitute for the high-performance wagon, a car that has already been caught on camera.

Seeing as how the outgoing B5 is already a beast with 600 horsepower (441 kilowatts) coming from an Alpina-tuned biturbo 4.4-liter V8 engine, the new one should be an absolute rocket. That's because it will lose some serious weight as a result of switching to the CLAR platform like all of the other models from the new 5 Series (G30) family. A power hike over 600 hp is not expected since it would make it stronger than the larger B7, which we recently reviewed.

For the same reason, a bump in torque over the current 590 pound feet (800 Newton meters) is not expected. Even if it won't have more power, the diet alone corroborated with other tweaks should enable the new B5 hit 62 mph (100 kph) in less than four seconds taking into account the outgoing car needs 4.2 seconds. A higher top speed to eclipse the 204 mph (328 kph) achieved by the current B5 is also very much possible.

If you would rather get Alpina tuning and styling on a powered-up diesel 5 Series, the D5 should live to see another generation. It will be interesting to see whether Alpina will sell these two cars with a grippy xDrive layout since we already know the BMW M5 will be offered with an AWD setup, likely as an option.

The M5 Sedan (F90) will probably be the first to see the light of day in the second half of 2017, with Alpina’s B5 and D5 dynamic duo to follow shortly in both Sedan and Touring body styles.