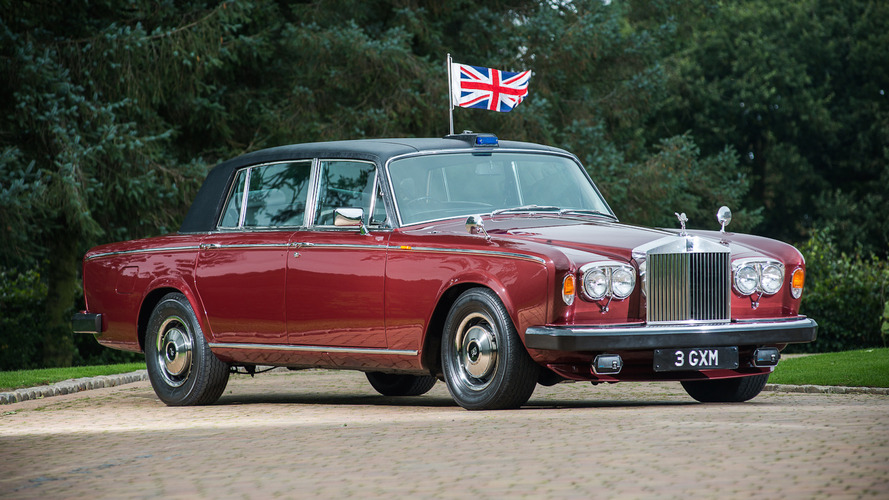 Bentleys and Rolls-Royces once owned by Princess Diana, Queen Elizabeth II, and other royals are heading to auction in November.

If you've ever dreamt of living the life of British luxury, well now you can… for the right price. At the upcoming Silverstone Auctions Classic Motor Show sale on November 12 and 13, 12 of the finest vehicles from the collections of British royalty and prestigious British celebrities will head up for auction, from Audi, to Bentley, to many others in between.

The height of British ultra-luxury vehicles can be attributed to two brands almost exclusively: Rolls-Royce and Bentley. In celebration of the former, Sir Elton John (he of Rocket Man fame) decided upon a 2005 Phantom for his luxury chariot of choice.

Bentley retains a special position within the British empire — it’s one of only four manufacturers to hold a Royal Warrant to supply vehicles to the household; Jaguar Land Rover, Vauxhall, and Volkswagen are the other three. To celebrate that honor, Bentley created this custom Mulsanne for the Queen in 2012.

Unlike the typical fleet of black limousines usually held by the royal family, this Mulsanne was finished in a special Barnato Green, so named to honor Joel Woolf Barnato, a British financier and racing driver. The car was used almost exclusively for travel to London from 2012 to 2014 before being sold off. It has been regularly serviced and shows just under 6,000 miles (9,656 kilometers) of use — estimates have it going for anywhere between £215,000-£235,000 ($264,000-$289,000).

This handsome example of British royalty was hand built in 1980 per the request of Her Royal Highness Princess Margaret Rose. It features a handsome Cardinal Red finish under a black Everflex roof, topped off with Standard Pennant and Royal Crest mountings, and even a blue police light. The interior completes the package with a matte Rosewood dashboard and Black Nuala leather on the doors, foregoing the typical polished veneer found on all standard models.

Robert Michael Winner, a renowned film director and restaurant critic, took possession of this stunning Bentley T1 used on April 1, 1984. It was one of just 1,703 Bentley ’T’ Series vehicles ever produced new in 1975. He used it extensively until his death in 2013, when it was gifted to his chauffeur who retained possession until early this year.

One of the most iconic nameplates in the Rolls-Royce lineup, the Corniche was introduced in 1971 and lived on for nearly 24 years before being discontinued. This example was produced and delivered in 1984 to the London Embassy of the State of Qatar in Chesham Place for the personal use of the Emir of Qatar, Sheikh Khalifa bin Hamad Al Thani, and his family when in the United Kingdom.

Ten years before the Qatari royal family ordered their unique Corniche, this stunning example finished in Nugget Gold was under the ownership of Mr. Sylvester, a gentleman from Hampshire.

The Daimler Supercharged V8 — aka the outgoing Jaguar XJ — was registered on June 4, 2001, custom built to the personal specification of Her Majesty Queen Elizabeth II. Things like blue flashing strobe lights on the front bumper and flashing lights on the rear differentiated this example from other vehicles in the royal fleet.

Inside, a custom armrest was fitted to snuggly handle the Queen’s handbag of choice, as were a series of window switches that can be controlled from any seat of her choosing. The package comes finished in an iconic British Racing Green, with a beige and green leather interior.

Simple, clean, and silver; this Mercedes-Benz 560 SEL was never meant to act as a flashy royal vehicle when it was purchased new by the late King Hussein of Jordan and his wife Her Majesty Queen Noor Al Hussein. Things like heated and electronically controlled front seats, a telephone, and a glovebox with a microphone that connects to a speaker hidden in the grille were the most dramatic additions to the normally staid sedan.

Considered one of the most influential women of the 20th century by some, Princess Diana was regarded worldwide for her impact within the royal family. In 1992, after her separation from the Prince of Wales, Diana would go on to become one of the most photographed women of all time.

Many of those public appearances came from behind the wheel of this Gomera Pearl Audi Cabriolet. It featured a 2.3-liter five-cylinder engine and an automatic transmission paired with a creme leather interior finish. Diana owned it for just 10 years before parting ways with it, selling it with just around 4,000 miles (6,437 kilometers) on the odometer.

Introduced in 1976, the Bristol Brigand Type 603 carries the unique distinction of being the only car on this list with an American V8 under the hood — from Chrysler, to be exact. Not that that makes it any less British. Succeeding the lovely Bristol 411, the Brigand introduced a unique style to the lineup and a more powerful range of engines.

This unique example was registered to a Mr. D. Holland, on April 26, 1988, and was driven extensively until 1991 where it was purchased back by Bristol, only to be sold again in 1993 to its second owner, Mr. D. Starkley.

Bearing only a vague semblance to the modern 500L we know today, this 1972 example is a feisty Italian with a heritage to match. It was purchased used by Prime Minister David Cameron as a surprise birthday present for his wife Samantha.

As factory original as it may look to the untrained eye, this 1970 Mini Cooper S Mk II is a product of master craftsmen Wood and Picket. The British company has been converting, tuning, and supplying parts to Mini vehicles since the 1960s, and introduced this handsome example in 1969, where it was sold new to its first owner less than a year later.

In 1973, the Mini changed hands once again, this time to a Mr. John Hammel, the personal assistant and guitar technician to Sir Paul McCartney. Hammel owned the car only briefly before selling it off to Wings member Denny Laine. But after just eight months of ownership by Laine, Hammel purchased the car back.