I was on The Grand Tour... possibly 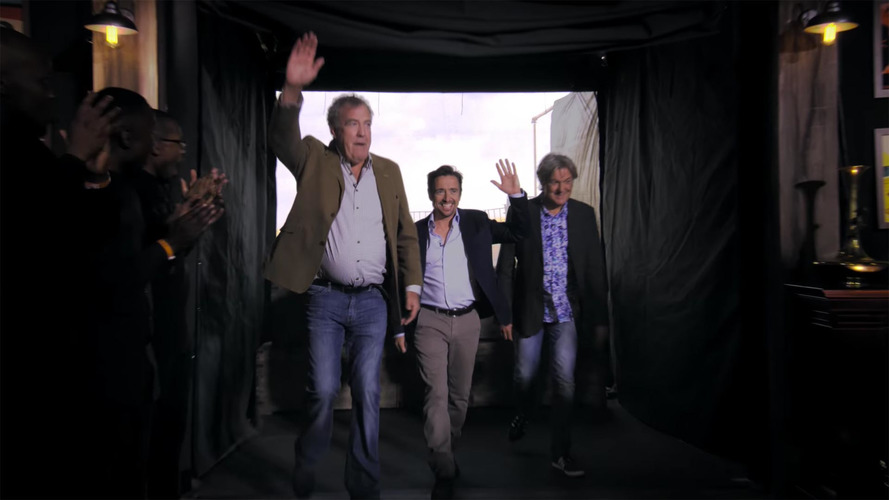 Our British contributor was lucky enough to gets tickets for a studio taping of The Grand Tour, and may have got himself on the show.

A few weeks ago, Jeremy Clarkson, Richard Hammond, and James May pitched their tent in the pretty English coastal town of Whitby, Yorkshire, for the third round of studio filming of their new series, The Grand Tour. As luck would have it, Whitby is only 20 miles (32 kilometers) up from the road from my home town of Scarborough. So when the event was announced, I was one of the 592,000 people to apply for tickets to see the taping in person.

It may be pretty in other seasons, but Whitby is cold, damp, and windswept in the depths of fall. Quite a contrast to the high plains of South Africa and the Californian desert, the previous studio filming locations. So you may well be wondering, justifiably, what on Earth was The Grand Tour doing there.

All three presenters have history in Yorkshire. Clarkson was born in Doncaster and spent his early career working for the county’s local newspapers; Hammond spent his childhood in Ripon and started his career on local radio in the area; and May lived in Rotheram while a teenager. Whitby appeared in a number of Top Gear films, as well as the DVD special The Worst Car In The History Of The World. Plus, Clarkson and May claim that the best fish and chips in the world are to be found there.

I was fortunate enough to be one of the few hundred applicants to actually receive tickets to the show; I found out a week ahead of time, and the wait was painful. On the day of the taping, I got to Whitby bright and early. It turned out the tent had been set up right on the harbor, among the fishing trawlers, pleasure boats, and lobster pots. Legions of paparazzi had descended on the town, hoping to catch an image of something crazy happening. Whitby had probably never seen anything like it, but the locals, being a phlegmatic bunch, seemed to barely notice.

I was joined by a fellow motoring journalist and presenter who hero-worships Hammond and was even more excited about the day than me. Neither of us had been to a studio taping before, so we didn’t really know what to expect. Even less so as so little is known about the show.

We were shepherded into a holding area where we were relieved of phones and cameras. In exchange, Yorkshire Tea was on tap and a local chippie provided some of the finest chips – not fries but proper, British chips – I’ve ever had. The anticipation built as every member of the 400-strong audience was ushered in.

Over-running rehearsals delayed proceedings, but spirits remained high until we all finally shuffled into The Grand Tour tent itself. If you’ve seen the pictures that have been released, you’ll have an idea that it resembles an early 20th century gentleman’s expedition tent. Obviously, I can’t say too much, but suffice it to say, it looks amazing, if smaller than I was expecting.

The floor manager addressed the crowd, setting the tone with a few jokes. And then, the big moment arrived: Clarkson, Hammond, and May made their entrance. The door opened and in they came as the audience cheered and applauded. I’ve seen them before at Top Gear Live, but never that close up. It took a moment to adjust to the fact that, yes, they are actually real people.

Clarkson did most of the talking, joking, dropping F-bombs, bantering with the audience, and explaining a few references that would be made as far as he could. Which wasn’t very, because, as all three kept pointing out, they don’t really know what they’re doing at this point.

Introductions over, it was time to get on with the show. And the next three hours flew by. Apart from a few flubbed lines, it was much slicker than I expected from reports about other Grand Tour tapings. But then, when you’ve being doing something for more than a decade, as these presenters have, you get good at it – even if the setting and context changes.

I'm more excited about The Grand Tour than I've ever been about anything.

Clarkson, of course, dominated proceedings. Standing six-foot, five-inches, he towers over everyone, and so does his personality. Hammond was on scrappy form too, but May had a cold. Not that it stopped him from going off on a huge (partially scripted) rant at Clarkson. The audience laughed and cheered in the right places, the segments played well, and everyone appeared to be having a jolly good time.

Unfortunately, there weren’t any opportunities for audience members to interact with the presenters outside of the tent, as there had been at previous tapings. The day was simply too short, and the holding area too far away from the Green Room. Still, in one rather hectic moment, I’m 90 percent sure I was standing next to Clarkson when he was on camera. I won't find out until the episode airs. Which worries me because, if I am in the show, it'll rather ruin it for me. Because I hate watching myself.

It all passed so quickly that I emerged from the tent not entirely sure what had just happened. Even so, now I’ve seen what Amazon Prime has done with the world's most famous car show and how the presenters have reinvented themselves, I'm even more excited about seeing the show. In fact, I'm more excited about The Grand Tour than I've ever been about anything.

The series premier on Amazon Prime on November 18 cannot come soon enough. In the meantime, watch the trailer below to get a taste of what's in store.