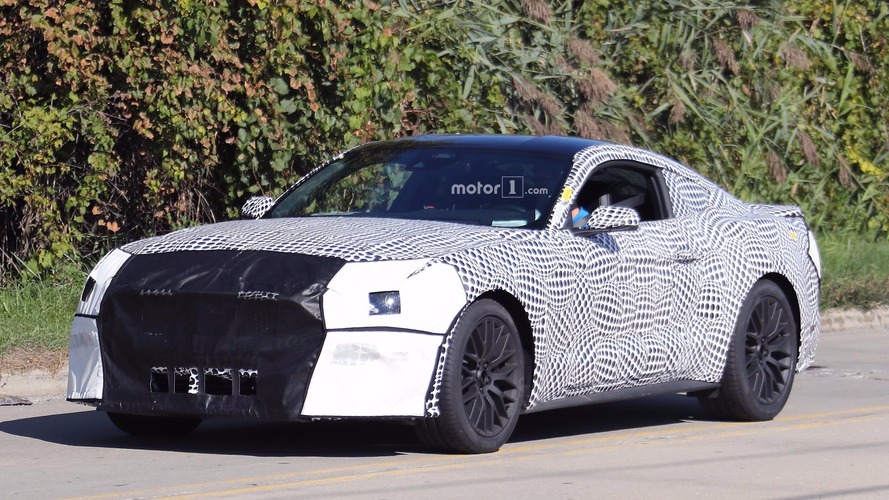 Ford's concealment does a fantastic job of hiding the refreshed Mustang's design.

We saw shots of the 2018 Ford Mustang convertible a few weeks ago, but our spies just captured the hardtop GT for the first time in this new batch of photos. Unfortunately, the abundant camouflage does a great job of hiding many of the changes.

Ford’s polka-dot pattern can’t keep every bit of the Mustang's updated styling a secret. In front, the lower fascia is now split in the middle. It also appears that the trunk lip spoiler is a little more aggressive than the current part. The gallery includes a single photo of the interior, but the engineers keep the cabin well concealed.

The 2018 Mustang reportedly has a new front fascia and marks the introduction of the Mach 1 trim. In general, this model is more aggressive than the GT but not quite as hardcore as the Shelby versions. We expect Ford to retain that position in the lineup for the new one.

A leak from Ford’s online parts catalog suggests the 2018 Mustang is available with a 10-speed automatic gearbox. The Blue Oval and General Motors both are part of this component’s development. In the latest Camaro ZL1, Chevrolet claims that it can shift faster than Porsche’s PDK. Ford’s engineers can probably manage similar performance.

The 10-speed might only be available with the 5.0-liter V8, and the 2.3-liter EcoBoost four-cylinder would continue to use a six-speed auto. In addition, the range-topping Shelby GT350 reportedly benefits from a dual-clutch transmission, which is possibly the same one as in the new Ford GT.

Ford might release a little official information about the 2018 Mustang’s updates before the end of the year. However, the Blue Oval often holds its biggest announcements for the North American International Auto Show in early January. We might not have confirmation of what the refreshed styling looks like or details about the new transmissions until then.