2018 Mercedes E-Class Coupe loses some of the camo 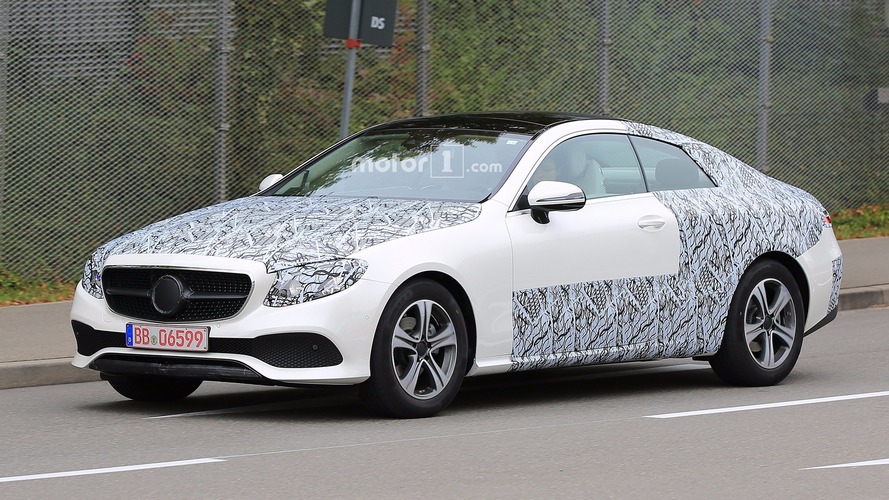 Showing more of its metal than ever, the next-gen E-Class Coupe is revealing its sleek, yet very familiar shape and design.

Following the introduction of the sedan and wagon, Mercedes-Benz is gearing up for the launch of the third body style: the coupe. While the outgoing E-Class Coupe uses the underpinnings of a stretched C-Class Coupe from the previous generation, its successor will have its own hardware and that should have a positive impact on all fronts. What we have here is a prototype just about ready to drop off all of the camouflage to reveal a design that will have very much in common with the smaller C and the larger S coupes. The psychedelic wrap isn’t actually hiding something we haven’t seen before, but that does not mean the E-Class Coupe won’t be a looker.

While this newest batch of spy images isn’t allowing us to take a peek inside, a previous set of images from a few months ago gave us the opportunity to have a look at the coupe’s lavish cabin. It’s bound to be a tad different than what the two other E-Class models have, but even so it’s going to be very familiar for fans of the brand.

Design aside, the coupe will use just about the same assortment of turbocharged engines shared with the sedan and wagon. However, there might be one big novelty: the return of straight-six engines. The rumor mill is indicating the company with the three-pointed star logo has plans to introduce a new family of silky-smooth engines as early as 2017, so it would make sense for the E-Class Coupe to get them from day one.

There’s no such thing as an E63 Coupe right now, but we know for a fact that in its new iteration the E-Class Coupe will receive the special treatment from the engineers at Affalterbach, as will its convertible counterpart. More than three years ago, Mercedes product manager Gerd Junginger admitted it was a mistake not to AMG-ify the two cars, but he made the promise that mistake won’t be made again with the new generation.

Seeing as how there’s not much camo on this prototype, chances are an official reveal of the regular E-Class Coupe is nearby. It could debut as early as January 2017 at the North American International Auto Show in Detroit. If not, Mercedes will organize the car’s big debut two months later in Geneva.