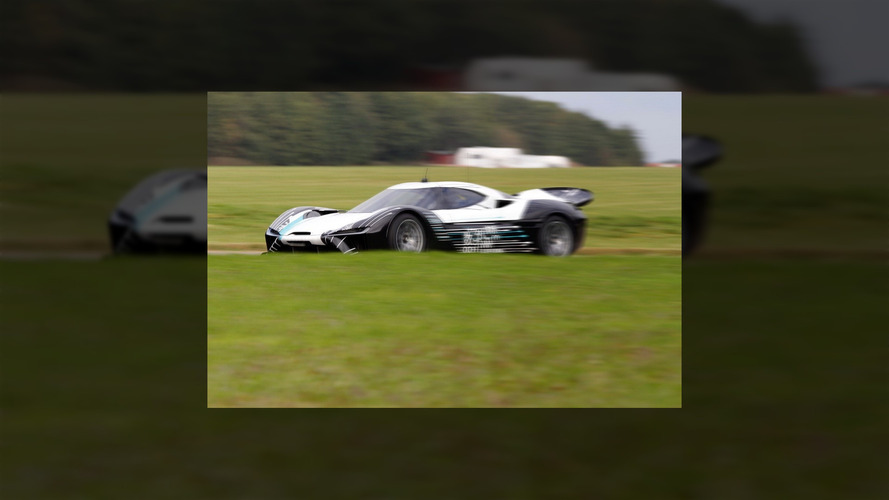 Even though it's not as exciting as the design sketch would have wanted us to believe, the prototype is nevertheless quite interesting.

The high-performance electric vehicle said to deliver one megawatt of power (1,000 kW / 1,360 hp) like the Koenigsegg One:1 was spotted recently on an undisclosed track in U.K. undergoing testing. By the looks of it, we are not dealing with a case of vaporware, hopefully.

The two-seater coupe has a design worthy of a supercar with a curvaceous body and a massive rear spoiler generating what must be some massive downforce at the rear axle. Also noticeable is the wraparound windscreen and a pair of very slender headlights giving it a high-tech look. The teaser design sketch, which emerged onto the web at the end of last month, also showed the NextEV supercar will adopt gullwing doors.

Reports from China are indicating the low-slung machine will be able to deliver some amazing performances, with the sprint from a standstill to 62 mph (100 kph) rumored to take fewer than three seconds prior to reaching a maximum speed in excess of 186 mph (300 kph).

Production is allegedly going to be capped at just six units at $1 million a pop, which seems like a bold move taking into account for that money people with such a large budget can opt for a performance car coming from the most prestigious marques out there. NextEV is basically known for its involvement in Formula E over the past few years. For the 2016/17 season, Nelson Piquet Jr and Oliver Turvey are using an upgraded car featuring an all-new powertrain, which is said to have a few things in common with the road-going car.

Shanghai-based NextEV startup was founded by William Li, who is also the company’s chairman and the owner of bitauto.com, one of the biggest car sites in the People's Republic. Former president of Ford of Europe, Martin Leach, is the company’s co-president, and in his interview with Autocar he revealed plans to “set new standards in electric car performance” with the upcoming, yet unnamed model. He also says the car has been in development since 2013 and will use technology and hardware derived from the Formula E program.

Scheduled to be introduced on November 21, the Chinese electric supercar will actually be revealed at a special event in London.