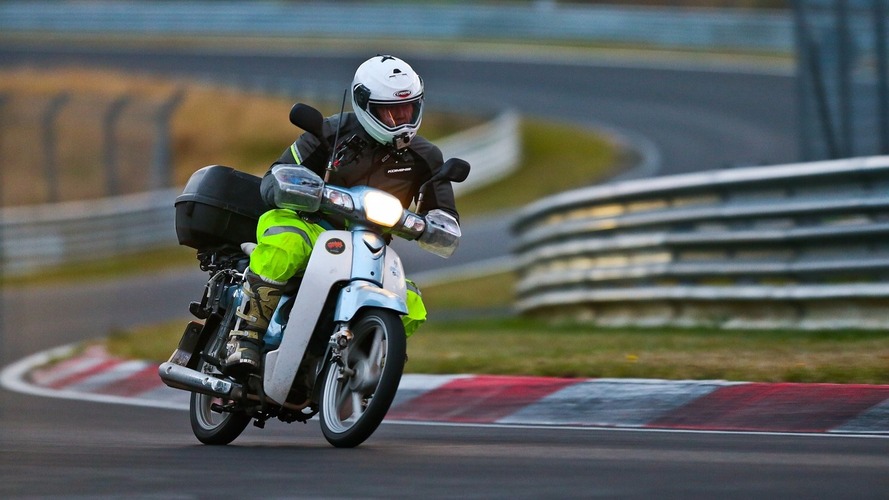 Traveling 11,000 miles to the Nordschleife on an 8 hp bike is surely the ultimate gearhead roadtrip.

A South Korean gearhead was so determined to fulfil his dream of lapping the Nurburgring that he set off on a madcap, 11,000 mile (18,000 kilometers) adventure to get there, riding an 8 horsepower (6 kilowatts) bike.

Jae Yeong Lee headed out from Seoul, South Korea and crossed Asia, Russia and Europe on a 110cc Honda Super Cub. According to Bridge to Gantry, the Nordschleife regulars immediately took him under their wing and he told stories of crashes, roadside camping, and having to stop for fuel every 90 miles (150 kilometers) or so.

One of those regulars, Thilo, took Lee out for a fast lap around the circuit in his SEAT Leon Cupra. As you can see in the video below, Lee loved the experience.

Then Lee went out on his trusty Cub - at the end of the day, sensibly - for what must have been the slowest lap of the Nordschleife that has ever been seen. Relieved of 100 pounds (45 kilograms) or so of luggage, though, Lee could well have reached the Cub’s heady top speed of about 75 miles per hour (120 kilometers per hour). As you can see in the image at the top, he was certainly doing his best to get his knee down.

Lee's Instagram account is worth a browse to see images and videos of what he got up to on his wild and crazy roadtrip. I only wish I had the guts - and time - to do the same thing myself.