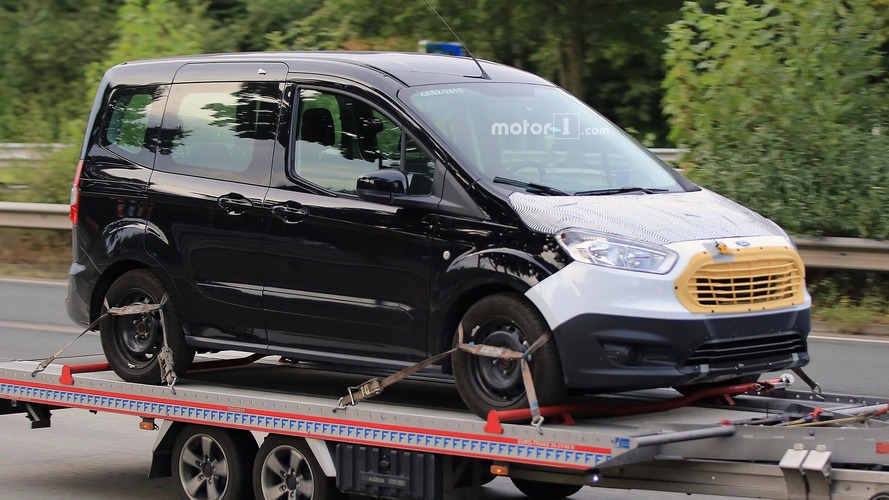 This one only shows styling tweaks at the front.

The Ford Tourneo Courier is the Blue Oval’s answer for European families that want a small van with lots of carrying capacity, and these spy shots show the company has a mild facelift under development for it. Presumably, the similar upgrades would eventually arrive on the Transit Courier, which is the cargo-hauling version of this model.

Ford’s designers overhaul the Tourneo Courier’s nose. The new fascia has a somewhat wider lower intake than the current van. Further up, the grille now features vertical slats, in addition to the horizontal bars on the present vehicle. The headlights appear slightly sharper, too. Ribs underneath the hood’s camouflage hide the tweaks there, but the existence of this obfuscation suggests there must be something new that’s worth concealing.

These photos don’t show any changes at the sides or on the rear, but our spies don’t expect Ford to introduce the new van until next year. It’s possible this mule might not have all the exterior changes, though.

The Tourneo Courier would continue to ride on Ford’s Global B platform, which models like the Fiesta also use. The engine range would likely stay remain the same and continue to offer buyers a variety of small-displacement gasoline- and diesel-fueled powerplants.

Ford is also hard at work developing three- and five-door versions of the next-generation Fiesta. The Blue Oval is trying something different with the new one because it continues to ride on the Global B platform. Rather than investing money into new underpinnings, the automaker is reportedly putting the funds into improving the interior fit and finish. The better materials should give the vehicle a much more upscale feeling. The business might only offer the hatchback with turbocharged engines, too. Prices would increase, but the Ka+ would be in the lineup for customers who prefer basic transportation.