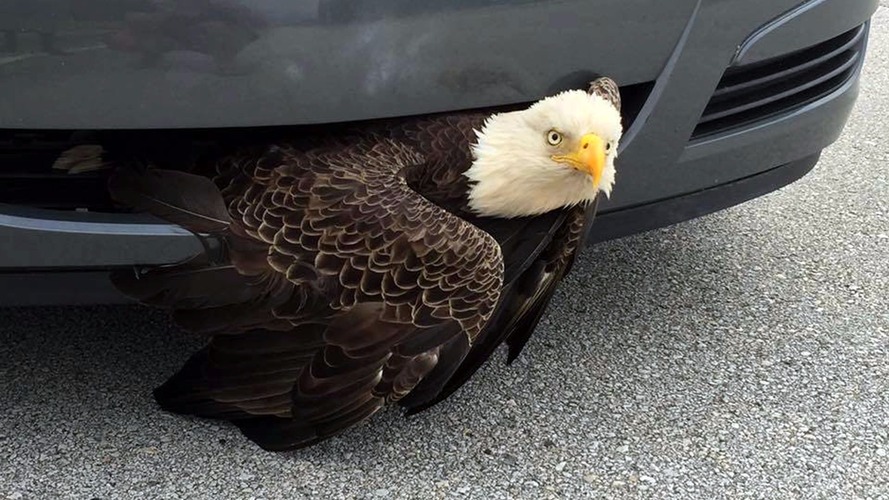 The bald eagle: the majestic, deadly, and noble symbol of the United States. And now victim of a great indignity.

A bald eagle in Florida had an unfortunate encounter with a Saturn Aura as it flew across a highway in Clay County. When the trajectory of avian and automobile converged, the driver was no doubt perplexed as the bird simply disappeared. If it had been killed, it would surely have fired off into the scenery. If it had survived, it would be soaring into the sky.

Imagine his surprise, then, when he stopped and walked around the front of his car to find the eagle crammed into the front bumper grill. A deeply undignified position for an animal that is the very embodiment of dignity to find itself in. No wonder the bird looks so totally enraged by the situation.

The driver called the emergency services who were able to liberate the eagle from the bumper. Clay County Sheriff’s Office posted the images you see here on Facebook and explained: “A citizen had a bald eagle fly in front of his vehicle and the bird became lodged in the grill of the vehicle. Clay County Sheriff’s Office and Clay Fire Rescue personnel responded and rescued the eagle from the grill. The bird is alive and was turned over to the B.E.A.K.S. Wildlife Sanctuary. Great job by all involved.”

It's almost as if this kind of thing happens every day.

The main, thing, of course, is that both bird and driver are fine. And have a story they will be dining out on for months. Assuming that bald eagles can tell stories.