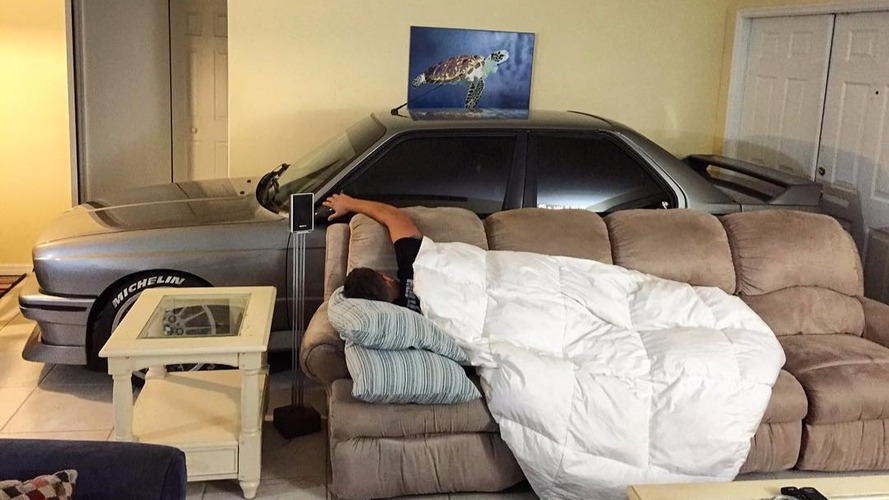 Fearing the worst for his car when Matthew hit - E30 M3 owner in Port St. Lucie, Florida, knew he needed to protect his ride.

Hurricane Matthew began its path of destruction on September 28, and is still causing a ruckus as it makes its way up the southeastern United States. Most Americans caught in the storm's path were plenty prepared, but not to the same level as Instagram user Jalilsup.

The user, who according to his Instagram description is a 26-year-old named Randy Jalil, owns a gray E30 BMW M3. Fearing the worst for his car when Matthew hit the U.S., Jalil - who lives in Port St. Lucie, Florida - knew he needed to protect his ride. But he decided to forego costly storage garages, and instead opted to drive his car through a set of double doors and right into his living room.

As you can see in the pictures from Jalil's Instagram account, we're not simply talking about a separated section of the living room designed specifically for parking cars - the M3 is literally sandwiched between a wall and a couch. Luckily the floor consists of tiles, so there's no worries about staining carpet.

Although Hurricane Matthew caused much devastation throughout the U.S., Jalil's house was reportedly spared any significant damage.

One the most recent videos on the jalilsup account shows the BMW being reversed out of the double doors it originally drove through into the house. With a little help from someone guiding him out, Jalil squeezes the car past the doors, with just a few inches to spare on each side. With a big smile and a thumbs-up from the driver, the car makes its way back to its rightful place at the front of the house.

Jalil clearly has a great sense of humour, because other pictures include him sitting at a table beside the car, eating Pumpkin Spice Cheerios, with some Castrol oil available for the M3.

Although Hurricane Matthew caused much devastation throughout the U.S., Jalil's house was reportedly spared any significant damage. More notably, though, his ingenious idea allowed his BMW to avoid any harm. For that, we salute you.