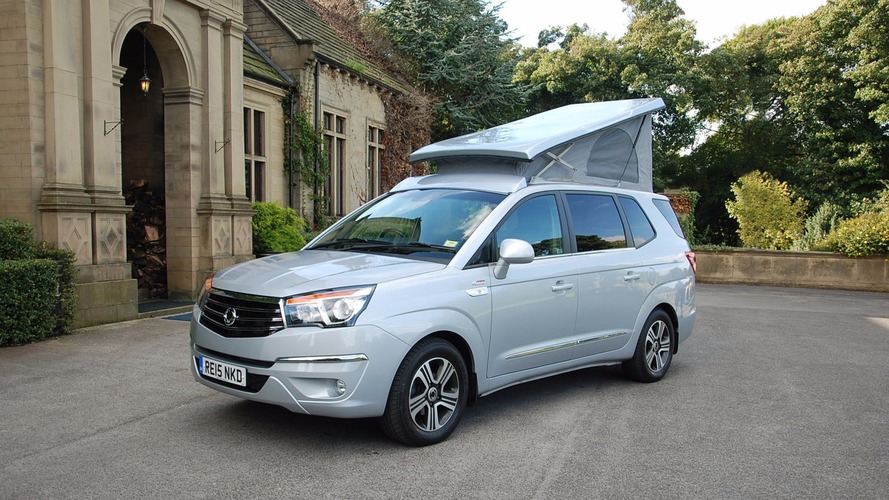 The minivan-based camper is one of the cheapest in the UK.

Korean automaker Ssangyong is set to launch an off the shelf campervan conversion for its Turismo minivan.

The Turismo itself is both the biggest and cheapest full-size minivan on sale in the United Kingdom. Indeed, at 201.9 inches (5130 millimeters) long, it is on a similar scale to commercial vehicle-based minivans. Power comes from a Mercedes-sourced, 2.2-liter, four cylinder turbo diesel engine producing 178 horsepower (133 kilowatts) and 295 pound-feet (400 Newton meters) of torque. A six-speed manual, or seven-speed automatic gearbox sends drive to the rear wheels, or all four.

In the UK, the top of the range version with an auto ‘box, 4WD, and every gadget you can think of costs £24,995 ($30,918). And entry-level Ford Galaxy, by contrast, is £2500 ($3092) more expensive. And the Turismo Tourist significantly undercuts similarly-sized rivals like Volkswagen California and the aforementioned Wellhouse Transit, too, prices starting at £29,995 ($37,104). Most other two berth campers available for that price are considerably smaller.

Options include interior heating, mains electricity hook-up, solar panels, and a four berth layout with an extra pair of beds in the pop top.

There is, of course, reasons why the Turismo is so much cheaper than its rivals: the interior is not as well finished and the driving experience is not as good. But it is an awful lot of car for the money.

Ssangyong Motor UK boss Paul Williams said: “Turismo is one of the largest cars on the market, and in standard form offers seating for seven adult passengers and their luggage, and therefore ideal for conversion into a two-person campervan. Wellhouse has done an excellent job in creating such a great vehicle for the booming leisure market.”