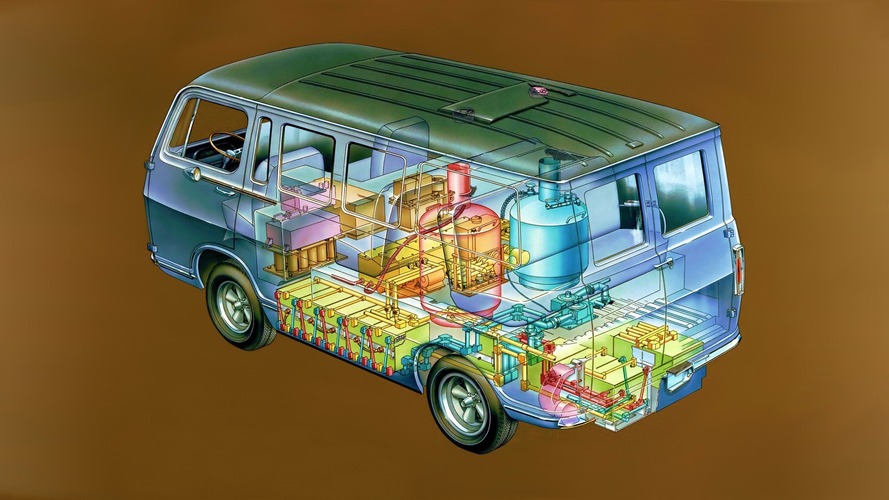 Hydrogen fuel cells are often touted as the future of vehicular propulsion. But the technology is hardly new.

A fuel cell creates electricity by converting the energy released as positively charged hydrogen ions react with oxygen. The principle was first demonstrated over 200 years ago in 1801, while the first working fuel cell was invented in 1838. It wasn’t until the early 1960s that fuel cells were put to practical use, though, powering NASA satellites.

History doesn’t record when automotive engineers first took an interest in fuel cells. However, General Motors lays claim to producing the first working fuel cell vehicle, which made its debut 50 years ago this month.

Work on the Electrovan started in January of 1966 and was completed in time for a demonstration at the Progress of Power show that October. A team of 200 worked three shifts a day to meet the deadline.

While a sleek and sexy sports car might have been a more attention-grabbing base for the fuel cell system, the team had to use a van simply because package was so enormous, taking up the van’s entire load space.

Durability and speed tests were carried out for a few months before Electrovan was stashed away in a warehouse. It was almost forgotten until 2001 when it was rediscovered. In the meantime, GM continued to develop the technology, joining forces with Honda in 2013 to work on the next generation of FCV, including the military-spec Chevrolet Colorado ZH2 we saw earlier this week.

It is, of course, now possible to buy a fuel cell-powered car from the showroom. The Hyundai Tucson FCEV has been on sale since 2013, while the Toyota Mirai was launched last year. And a follow-up to Honda's pioneering FCX Clarity is expected imminently. The technology is there - even if the infrastructure to support it isn't yet - and it started with an ungainly, goofily-named van.