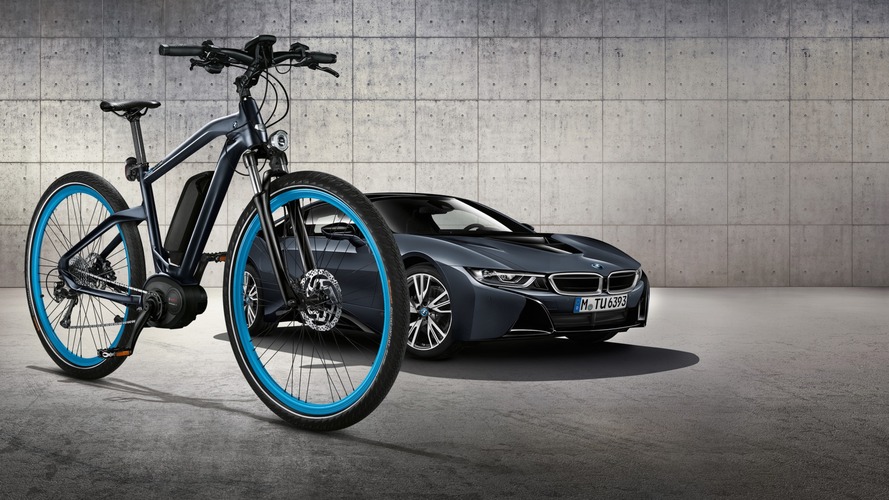 The limited edition i8 Protonic Dark Silver now has its own e-bike companion, but it doesn't come cheap.

Earlier this year, BMW launched the €1,400 Cruise M Bike Limited Edition to complement the M2 Coupe. If you thought that was expensive, the new Cruise e-Bike Limited Edition costs more than double, at €3,500. To be fair, this is an e-bike after all and at the same time it’s significantly more exclusive, with production capped at 300 units whereas the M2-flavored bike is available in 1,500 examples.

It’s basically the e-bike counterpart of the i8 Protonic Dark Silver Edition currently on display in France at the 2016 Paris Motor Show. All electric bikes are going to come with a special badge and a certificate to highlight their special status and also to try and justify the €400 premium over the standard model. In order to mirror the plug-in hybrid sports car, the e-bike will feature a Protonic Dark paint for the frame combined with an Electric Blue finish for the rims.

Just like the regular BMW Cruise e-Bike priced at €3,100, the fancy limited-run model features a 10-speed gear system and is fitted with a 400-Wh battery pack providing a range of up to 62 (miles) 100 kilometers during which it can max out at 16 mph (25 kph). Once the removable battery is depleted, it can be recharged while it is attached to the bike or separately. A full recharge is going to take approximately three and a half hours, but if you’re in a hurry, one and a half hours of charge will be enough to fill up half of the battery.

As far as the car is concerned, BMW says it will kick off production in December and will begin taking orders early next year at a yet undisclosed price tag. Available for a limited amount of time, the i8 Protonic Dark Silver Edition is actually a follow-up to a similar variant introduced at the Geneva Motor Show earlier this year with the name “Protonic Red Edition.”

MW Lifestyle continues its series of exclusive special edition bikes with a limited edition of its innovative e-Bike: the BMW Cruise e-Bike Protonic Dark Silver. This new edition – limited to 300 units – stands out with an exclusive colour scheme: The Protonic Dark Silver paint finish matches the official colour of the BMW i8 special edition, which has just been premiered at the Paris Motorshow. Rims in bright Electric Blue further underline the bike’s athletic character.

Like its automotive inspiration, the BMW Cruise e-Bike Limited Edition delivers a unique riding pleasure thanks to its “hybrid drive”: The Performance-Line drive with a 400-Wh battery supports pedaling in four different modes (ECO (+ 50%) to TURBO (+ 275%)), up to a top speed with electrical pedal assistance of 25 km/h (16 mph). The 10-gear system ensures ideal transmission – when riding steep slopes or doing dynamic sprints on the flat terrain.

Each bike of the limited edition comes with a certificate and a special badge.

The other BMW bike models and matching equipment are also available at selected BMW retailers or online at shop.bmw.com.