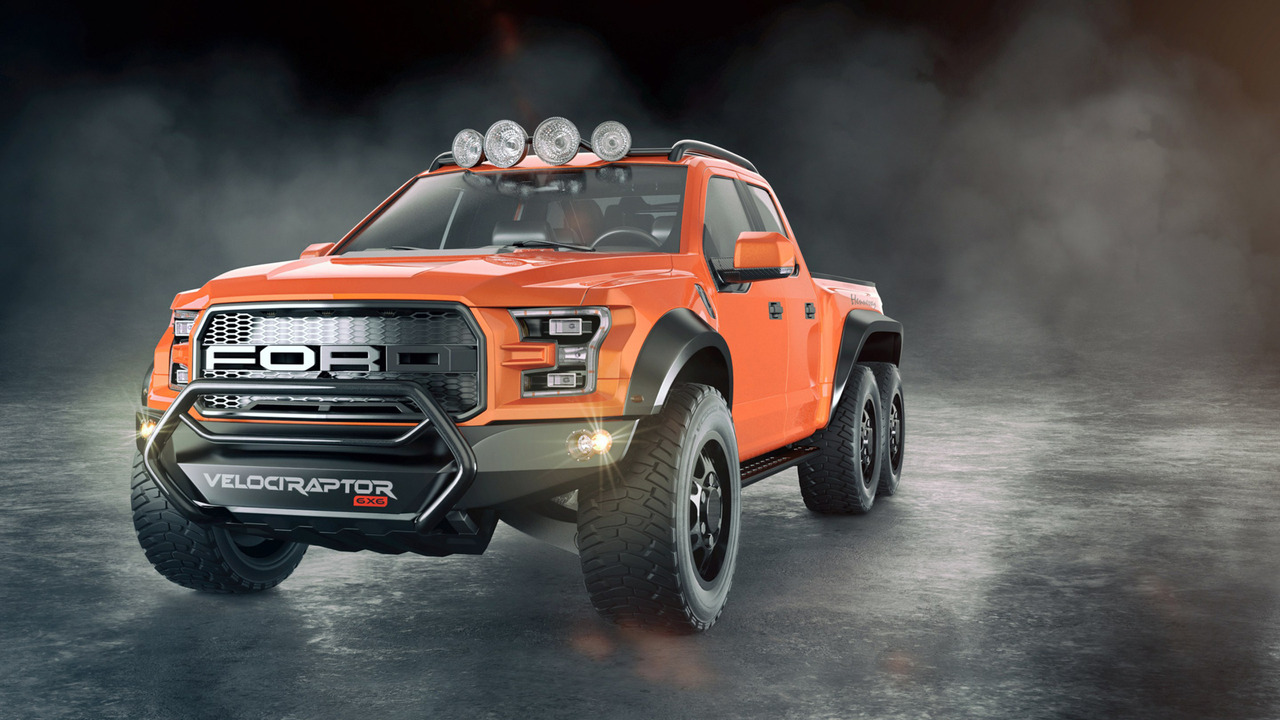 When the zombie apocalypse breaks out, you might want this to escape.

There are some people who look at vehicles and always want more. The tuners at Hennessey Performance tend to fit that mold, amping up all manner of cars with extra performance, extra superchargers… and sometimes extra wheels. Meet the Hennessey VelociRaptor 6x6.

Based on the 2017 Ford F-150 Raptor – which is, we should note, not yet on sale – the VelociRaptor 6x6 takes notes from the Mercedes-AMG G63 6x6, sprouting an extra axle to make it even more capable of going, well, anywhere.

Hennessey has stretched the vehicle's aluminum bed and fitted a secondary rear axle. It's the same as the Raptor's standard rear axle, meaning it comes with a limited-slip differential for improved traction. Then the tuners added new front and rear bumpers, 20-inch wheels with beefy off-road tires, roll bars, extra lighting atop the roof of the cab, and upgraded Fox suspension shock absorbers. All yours for a cool $295,000.

Of course, why stop with the Raptor’s standard engine, a 3.5-liter biturbo V6 generating a mere 450 horsepower (335 kilowatts)? For another $22,500, VelociRaptor 6x6 buyers will be able to bump power to more than 600 hp (447 kw) thanks to new turbochargers, new exhausts, a new intercooler, and new engine programming. Oh, and optional add-ons to cope with all that power include larger Brembo brakes, various interior lighting and visual upgrades, and even larger wheels and tires.

Over the years, Hennessey has sold about 800 units of its VelociRaptor, but this is by far the wildest, most extreme version we’ve ever seen. “Our VelociRaptor 6X6 is pure aggression on wheels – all six of them,” company founder and CEO John Hennessey said in a statement.

Hennessey Performance (HPE) today announced its VelociRaptor 6X6 concept.  Based on the 2017 Ford Raptor truck, the team from Hennessey transforms the new Raptor into a 6-wheel drive off-road vehicle with 600+ horsepower.

“Over the past five years we have built over 800 VelociRaptor modified Raptor trucks for enthusiasts around the world”, said John Hennessey, Founder & CEO of Hennessey Performance.  “We are now very excited to be able to offer the VelociRaptor 6X6 as well as our VelociRaptor 600 twin turbo engine upgrade to those who want even more power, performance and off-road capability.”

The VelociRaptor 600 twin turbo upgrade with 600+ horsepower will be available to new Raptor owners at the cost of $22,500.

“Our VelociRaptor 6X6 is pure aggression on wheels – all six of them”, said Hennessey.  “The new 2017 Raptor is going to be one of the best all-around trucks ever built.  We are excited to help take it to the next level both in terms of performance and exclusivity”.  The Hennessey VelociRaptor 6X6 can be ordered directly from Hennessey Performance or through select Hennessey / Ford dealers.