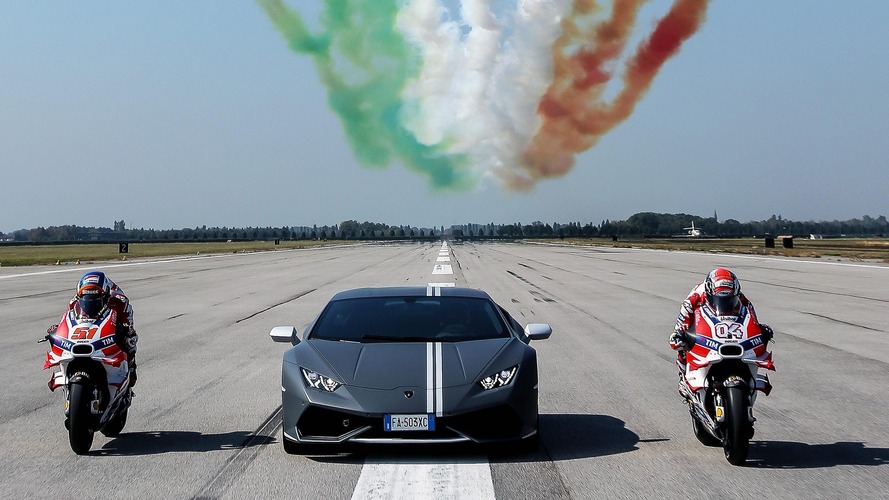 A Lamborghini, a Ducati, and a Aermacchi jet great together.

Lamborghini recently partnered with corporate cousin Ducati to celebrate being Italian. They also got the Italian Air Force into the act by having its National Aerobatics Team put on a show in the air while the hypercars and racing bikes performed on the ground.  The trio called the stunt Passioni Tricolori.

Each brand brought some of their ultimate vehicles to the event. From Lamborghini, that included showing off the Huracán Super Trofeo and GT3 racecars. This was also a natural place to show off the plane-inspired Huracán Avio. An Aventador was on hand for the festivities, too.

Lamborghini is limiting the Avio to just 250 units, and they come with a host of visual upgrades. Each one comes in a color from the coat of arms for the Italian Air Force Academy. They also have a double stripe in white or gray that runs over the roof and hood. Aircraft-like markings on the doors indicate "L63," which refers to Lamborghini and the company's founding in 1963. The same logo appears inside, and these models feature a mix of black leather and Alcantara. A hand-enameled plaque near the driver's window identifies the special edition.

Ducati was able to stand up to Lamborghini’s showcase by having MotoGP rider Andrea Dovizioso there with his Desmosedici GP racing bike. Ducati Corse General Manager Luigi Dall’Igna was also in attendance.

While the Ducati bikes and Lamborghini hypercars are capable of amazing performance on tarmac, they can’t stand up to the National Aerobatics Team’s stunts in the air in Aermacchi 339 jets. There precision flying skills are absolutely amazing. You can check out all the action in the video above.

Lambo also had a major celebration of its heritage when it produced the Gallardo Tricolore. These limited-edition models commemorated the 150th anniversary of the unification of Italy with a green, white, and red stripe down the body and driver's seat. It also had carbon fiber mirrors.

On September 13th at the Rivolto Air Base in Udine province, Lamborghini joined with Ducati and the Italian Air Force in a special celebratory day dedicated to "Passioni Tricolori" (Tricolour Passion). The event saw the coming together of the three Italian entities, each synonymous with excellence in their respective fields, well-known and appreciated throughout the world.

The Italian National Aerobatics Team performed a demonstration flight, after which Andrea Dovizioso along with Luigi Dall’Igna and Lamborghini Squadra Corse driver Mirko Bortolotti experienced the thrill of aerobatic flight aboard the team’s Aermacchi 339 aircraft.  In return, Lamborghini’s Huracán and Aventador cars and Ducati’s Desmosedici GP bikes stayed firmly planted on ‘terra firma’, demonstrating their speed and handling prowess on the connecting roads of the air base, while the Italian National Aerobatics Team flew over them.