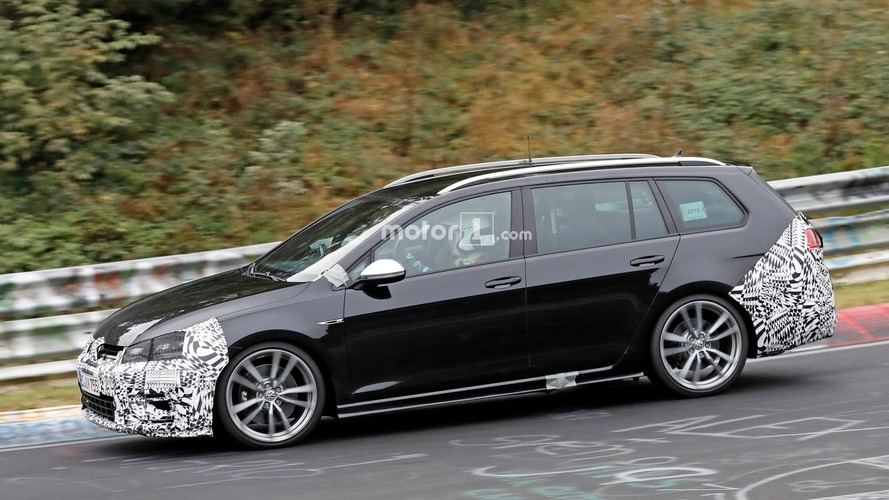 The beefy all-wheel-drive wagon from Wolfsburg has made the trip to the Nurburgring for a series of tests ahead of the facelift’s imminent reveal.

And by “imminent” we mean that it will likely be introduced next month together with the entire facelifted Golf range. Compared to the previous batch of spy images from the Alps, the new pics are a tad more revealing as these are showing a prototype of the Golf R Variant with less camouflage, thus giving us the opportunity to check out the redesigned front bumper. It appears to host a new lower grille with a grid pattern flanked by different intakes.

The side profile has remained virtually the same, although we do notice some wires sticking out of the hood and going inside the cabin. That’s likely a sign of an upgraded turbocharged 2.0-liter gasoline engine, but we’ll get to that later. Also visible is the full roll cage inside the cabin where the dashboard does not seem to have any disguise at all, thus signaling there will not be any important tweaks.

While the previous test vehicle did not have any sort of camo at the back, this particular prototype has a masked rear end and most likely it means VW has plans to make some changes to the rear bumper as well.

With the front-wheel-drive, 310-hp GTI Clubsport S now being more powerful than the all-paw R version, VW probably wants to restore the power order in the Golf’s range. That’s why the 2.0 TSI will likely be massaged to deliver more power over the 300 hp available in the current model. Don’t hold your breath for that 400-hp 2.0-liter shown in the Golf R400 concept because development of the unit has been terminated. That’s certainly sad to hear especially since the engine was supposed to power the Golf R420 special edition with a massive 420 hp on tap.

VW has announced plans to introduce the facelifted e-Golf (with 300-km NEDC range) next month, so it would make sense for the other members of the family to make their appearance as well.