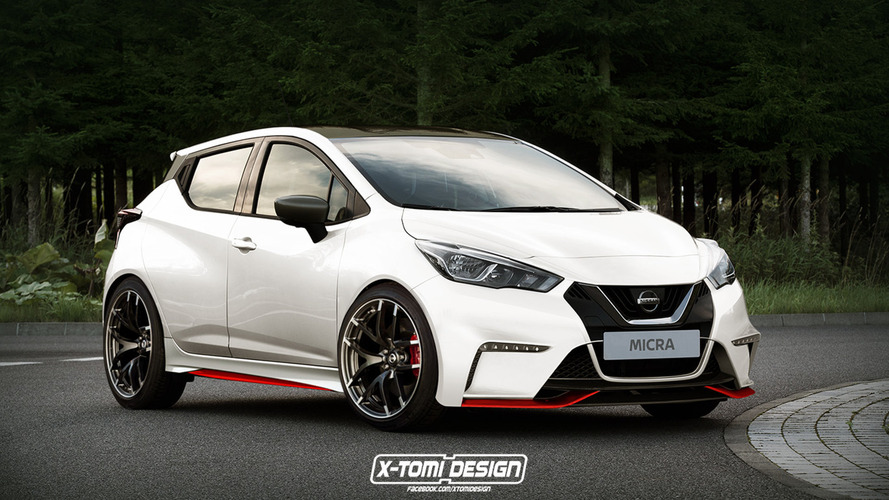 This hot hatch isn't real yet, but we wish it were.

The new Nissan Micra was among Motor1 editors’ favorite debuts at the 2016 Paris Motor Show because of its attractive sharp-edged style. The angular look begs for a makeover as a hot hatch by the talented folks at Nismo. We don’t know whether such a model might ever hit the road, but X-Tomi Design has a rendering of what a mightier Micra could look like.

Most of the aesthetic conversion into a hot hatch happens at the nose. The designer includes a much larger intake in the lower fascia, and the decision amplifies the V-shaped design there. It’s a perfect match for Nissan’s V Motion grille that connects to the hood. Sharply angled LEDs replace the fog lights, and there are slits for brake cooling ducts there, too.

Elsewhere, the wheels poking out of the fenders might be too extreme for some driver, but the red in the lower side sills adds a fantastic pop of color to the white body. The black trim around the greenhouse and on the mirrors brings more much-needed contrast. At the back, smoked taillights show a little aggressiveness, and you can barely see the tip of a spoiler on the hatchback.

As a rendering, we have the freedom to imagine what’s under the hood of this hot hatch. The 215-horsepower (160-kilowatt) 1.6-liter turbocharged four-cylinder from the Nissan Juke Nismo RS would be a perfect replacement for the stock 0.9-liter turbocharged three-cylinder with 90 hp (67 kW).

While Nissan isn’t talking about a new Micra Nismo yet, don’t rule one out. Former Nismo boss Darren Cox said that more high-performance models would come from the brand. “But we won’t just stick a load of stickers on a Micra and bring that over,” Cox said. “We are not about to rush headlong into extra models unless they feel right for our market.”  Based on that statement, a hotter version of the new hatchback would definitely be something special.