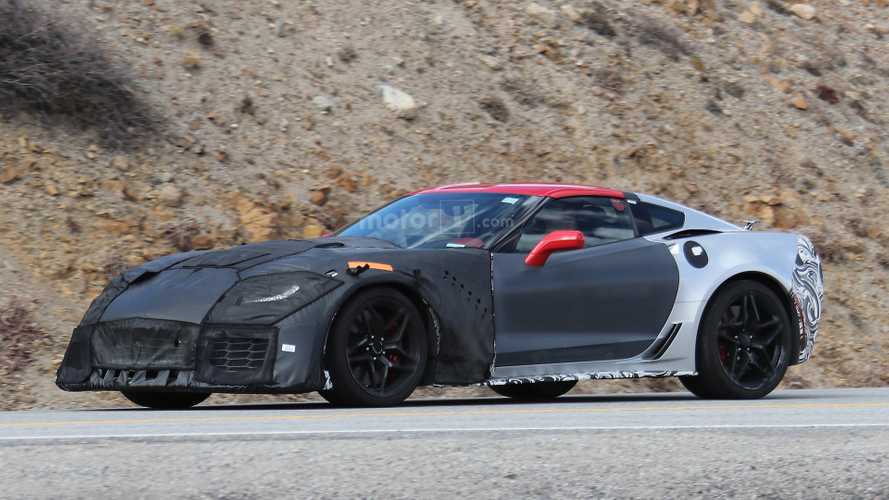 No wing, but massive wheels, brakes, and fenders give away this car’s performance chops.

Our spy photographers have caught the Chevy Corvette ZR1 up close and personal, providing our best look yet at the forthcoming beast. Though it doesn’t have the huge rear wing we saw in earlier spy photos – only small uprights remain in these shots – the massive fenders, wheels, and brakes on this prototype easily betray it as one step above the Corvette Z06.

This Corvette prototype appears to wear most of the bodywork from the Z06, but with uprights on the tail to support that aforementioned ultra-wide wing. Abundant camouflage over the nose likely conceals improve cooling or inlet ducting in the front fascia. The car is, after all, expected to have as much as 700 horsepower (522 kilowatts) from an upgraded 6.2-liter supercharged V8 engine.

Positively enormous brake rotors are evident on this ZR1 prototype, as are star-style, ten-spoke wheels that don’t appear to be available on any other current Corvette model. And reports indicate that rear wing, missing in these photos, could be electrically adjustable to improve downforce when necessary. We expect that Chevy will offer the ZR1 with both the Corvette’s standard seven-speed manual, and an automatic with either eight or ten forward ratios.

Chevy recently re-instated its trademark on the ZR1 name, a badge that has adorned plenty of extreme Corvettes in the past. The most recent, sold from 2009 to 2013 for the C6-generation Corvette, packed a supercharged 6.2-liter V8 engine good for 638 hp (476 kw). But with today’s Z06 already cranking out 650 horses (485 kw), the C7-era ZR1 needs to go even more extreme.

We should see the Chevy Corvette ZR1 in January at the 2017 Detroit Auto Show. It will serve as a kind of swan song before the long-rumored mid-engine Corvette arrives.