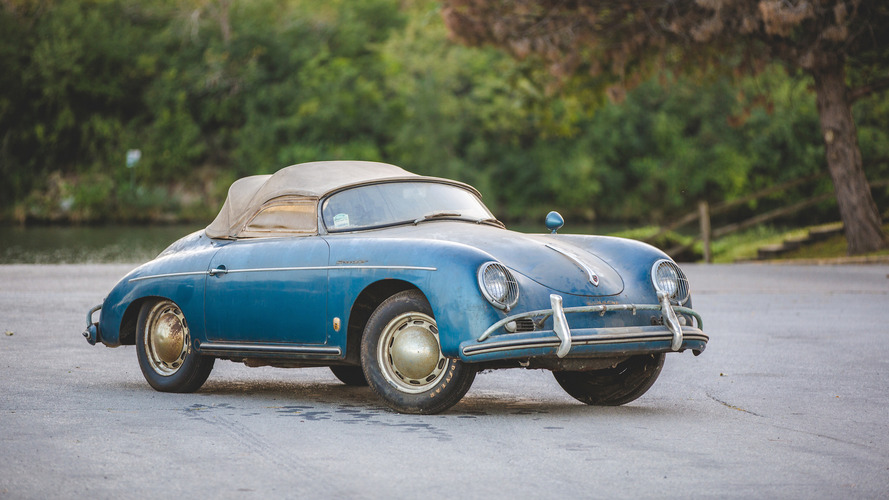 Car collectors love the thrill of a good “barn find;” vehicles stowed away for decades in hopes that they might accrue value over time. In the case of this rare Porsche — an iconic 356 Speedster — it wears that “barn find” badge with honor, remaining untouched in a garage for four decades. Now it’s heading to the auction block with a hefty price tag.

An upcoming centerpiece at the Auctions America event at Hilton Head in South Carolina, this rare 1957 Porsche 356A 1600 Speedster was uncovered 40 years after it was put into storage. It retains all of its original components, from the wheels, to the headlights… to the dust.

It was found an hour outside of Chicago, and wears a stunning Aquamarine Blue Metallic paint job. The interior comes finished in the original Beige Leatherette that came from the factory, as does the roof. Construction of the car was finished on March 5th, 1957, in Germany, and features U.S.-spec bumpers, sealed beam headlights, coupe seats, and the original 1.6-liter engine. It was one of just 1,171 cars produced up until that time.

Soon after it was completed and delivered to the U.S., it was purchased by a man named John Casper in June of 1957. It remained in his ownership for 59 years, and was a regular fixture at the various Porsche Club of America events in the area — though, it never did take to the track.

In 1975, the owner parked it in a garage on his property, that’s where it sat for over 40 years until the owner’s death in 2012. It was then passed on to a close friend, who officially took ownership of the car earlier this summer, and removed it from storage just last month.

“This time warp Porsche 356 is a true gem,” says Donnie Gould, President, Auctions America. “As more Porsche Speedsters are found and restored, it is becoming nearly impossible to find such an original car, let alone one that comes from almost six decades in single-ownership. With collectors still drawn to highly original, unmolested cars, we expect it will attract plenty of interest when it crosses the podium in November.”

The documented story of this Porsche Speedster starts in Hoopeston, Illinois, which is about four hours from Chicago. The first and long term owner of this Porsche travelled outside of the city of Chicago to purchase this Speedster new from Shakespeare Motors. The original invoice that accompanies this vehicle shows that on May 31, 1957 John Casper paid a fifty-dollar deposit on the car. The sticker price for this brand new German sports car was $3,502.00. Also accompanying the car is the original bill of sale that shows John Casper returning on June 6, 1957 to pay the remaining balance of the Porsche. It is conveyed that John thoroughly enjoyed his Porsche Speedster. He was often sighted driving the car to numerous Porsche Club of America events. Many of these events took place at racetracks, but it is said that he never took his Porsche on the track. The fuel tank has Road America stickers still intact from when he attended events. This was his summer car, which allowed the car to avoid the harsh northern winters that Chicago is known for. This explains why, today, it is in superior condition and solid throughout. The current owner reports the car to appear to be a rust free example, aside from the commonly seen rust beneath the battery. The original service booklet is included with the car and has only a couple pages removed at the beginning from when it was serviced with a few hundred miles. There are stickers in the door jamb showing services completed when the car had roughly 25,000 miles. The last year that this Porsche was driven on the roads was 1975. Unfortunately, at that time the owner became unable to drive the car anymore so it was put into storage. While in storage it was stored with the convertible top up, which helped save the top from major wrinkles; this also helped preserve the interior. The side windows were stored on the car and remain in very good condition, though the windows are yellowing from their age. The car retains its original tonneau cover for covering the interior when the top is down; and the original convertible top boot is also with the vehicle. The beige interior is preserved in excellent condition with no tears or sign of misuse. The interior also has the original VDO instrumentation, Porsche steering wheel; and it is equipped with a cigar lighter. The Porsche Certificate of Authenticity shows this Porsche was completed on March 5, 1957. It was finished in Aquamarine Blue Metallic (5607) with a Beige Leatherette interior. Optional equipment included USA bumpers, sealed beam headlights and Coupe seats in place of the Speedster seats. It is also fitted with a Raydyot fender-mounted mirror. Today the car retains its original paintwork with no re-spraying or body work appearing to have been done. The blue paintwork is said to be in very good shape; appearing as though a polishing would bring the paint back to presentable shine. Sadly the original owner of this Speedster passed away around five years ago. After his passing, a lifelong family friend acquired the Porsche from the estate in 2016. When going through the paper work with the family the original title, which was thought to have been lost, was found for the Porsche. This Porsche benefits from single ownership for the last 59 years. The original owner’s manual, spare tire and jack are included with the vehicle. This is a rare opportunity to acquire a very early original Porsche Speedster. Making it even more desirable is that fact that it is coming from 59 years of single ownership, unrestored and complete with all the original components. As more Porsche Speedsters are found and restored; it is becoming nearly impossible to find such an original car, with a spectacularly documented history and long-term single ownership. It is conveyed that the doors close excellent with a sweet solid sound; and the near perfect fit and finish of all the panels and gaps is rarely going to be found on another original Porsche. An automobile is only original once.