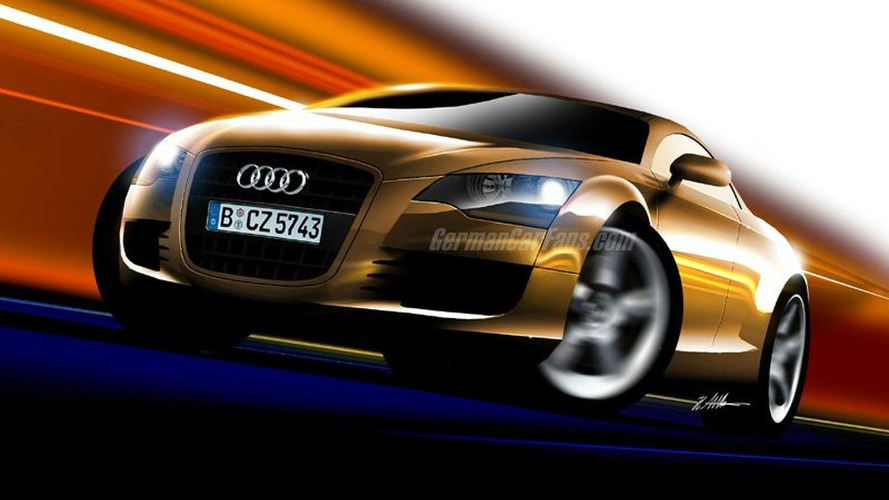 The new Audi TT is expected to be shown at the 2006 Geneva Auto Show in March. Styling of the new TT will remain loyal to the original design penned by Freeman Thomas. The only differences expected are headlights & taillights adopted from the Le Mans Concept with a twist of the new A3 thrown in and the new Audi shield. The rear will feature a new retractable rear spoiler for more downforce. At first, Ingolstadt wanted to use a modified A4 platform whose inspiration came from the Mercedes C based SLK and the BMW 3 Series based Z4; but the idea was scrapped on packaging grounds since the A4's longitudinal engine design and Torsen four-wheel-drive system is incompatible to the TT's compact dimensions and unusual proportions. The PQ35 platform will be chosen instead. The platform already underpins all of VW's marks, which include the Skoda Octavia II, the Seat Altea, Audi A3 and VW Golf V.

The new platform will be offered with FWD or with Quattro four-wheel-drive. The new multi-link suspension will be carried over from the Golf and will over class leading handling. A wider track and longer wheelbase should also improve handling and ride.

Engines are said to be new transversely mounted in-line four-cylinders and narrow-angle V6 engines. This will include the new naturally aspirated 150hp unit and the upcoming 2.0-litre turbo charged FSI. The 3.2-litre V6 will be reworked and FSI injection will be added to increase power to 255hp. Not to be out done by AMG, Audi is planning on introducing a RS version of the TT that boasts an incredible 350hp from the reworked turbo-charged 3.2-litre. A 6 speed manual will come standard and a 6 speed DSG will be option on all models except the entry ones.

Audi is planning on importing diesels to the united states starting with the new A6 in the 2008MY with the 3.0TDI, which is now undergoung US federalization but the TT wasn't inlcuded in this area, so it will not have a diesel for now.