BMW i3 and i8 show off colorful CrossFade concepts in Paris

BMW i3 and i8 show off CrossFade color concepts in Paris

We usually see Garage Italia Customs working on vehicles from Fiat Chrysler Automobiles’ brands, but the company teams up with BMW again at the Paris Motor Show for the debut of the i3 and i8 CrossFade concepts. Production versions with a similar aesthetic will arrive in early 2017.

Similar in the way a DJ can make a one great song transition into another, the CrossFade concepts have bodies that gradually evolve between two colors. The inspiration for this effect comes from the 19th century painting technique Pointillism that uses small bits of color for forming an image.

The i8 has a Protonic Dark Silver nose and a Protonic Blue rear. The magic is in the middle, though. Garage Italia Customs applies a careful distribute of colorful triangles that gradually transition the body between the two hues. From a distance, the change seems smooth, but a closer look how tiny changes in each triangle make the evolution possible. The Alcantara headliner and door panels bring the same trippy effect into the cabin. 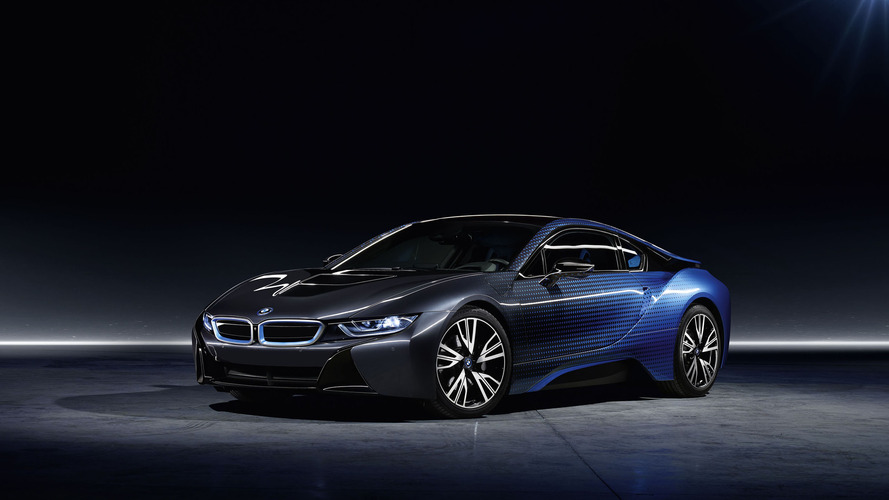 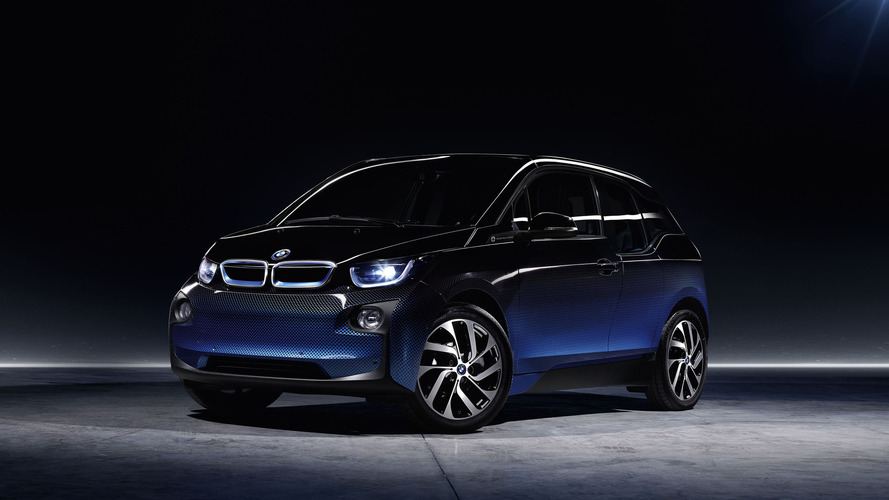 Garage Italia Customs used an interesting method for creating the dazzling exterior. The firm started with a completely Protonic Blue i8. The painters then added a stenciled film over the body and applied Protonic Dark Silver. Removing the covering revealed the eye-catching pattern.

The effect on the i3 is similar but even more impressive. The color transition on the electric hatchback happens vertically. Protonic Blue covers the lower portion of the body, and it transforms into black at the top. The Pointillism influence is even more obvious because of the sudden color change in the middle. The effect is reminiscent of how many sea creatures look. Inside, the seat bolsters and door panels have the same visual style.

BMW won't yet say how much the production CrossFade edition will cost or how many it will produce. The special model is one of many limited-run i sub-brand models recently, though. Just this year, there are examples like the red Celebration Edition, one-off Futurism Edition, and Protonic Dark Silver Edition, which also debuts in Paris.

Gallery: BMW I8 and I3 Crossfade Concepts

Concept cars featuring expressive colours in the style of pointillism to stage their world premiere at the Mondial de l’Automobile 2016.

Munich. A collaboration between BMW Group Design and Garage Italia Customs has produced an innovative colour and material concept of two concept cars based on current BMW i models. The BMW i3 Garage Italia CrossFade and the BMW i8 Garage Italia CrossFade will be presented on 30 September 2016 at the start of the Mondial de l’Automobile 2016 in Paris. The premiere in the French capital will also serve as an outlook on edition models of the BMW i3 and the BMW i8. These models, which both feature an exterior design derived from the concept cars, will become available at the beginning of 2017.

The common feature of the two concept cars is a surface structure that emphasises the groundbreaking design and the innovative character of the models BMW i3 and BMW i8 in a fascinating way. The focus here is on a specific colour design that was developed on the basis of a common painting genre during the late 19th and early 20th century and which provides for a particularly expressive appearance. “Lapo Elkann is a pioneer in linking the disciplines of fashion, automobile and design. As a designer, I find this comprehensive approach particularly exciting,” says Adrian van Hooydonk, head of BMW Group Design. “With BMW i, we have been successful in overcoming previous restrictions in automotive design through the use of entirely new materials. So the progressive expressiveness of the Garage Italia CrossFade Edition is perfectly in keeping with the BMW i3 and the BMW i8.”

In June 2016, Garage Italia Customs had already presented the BMW i8 Futurism Edition. This vehicle also featured a body surface concept that was inspired by the art of painting. The design of the BMW i8 Futurism Edition, which was created on the occasion of the 50th anniversary of BMW Italia, is based on the painting “Lampada ad Arco” by the futuristic artist Giacomo Balla. “Technological development and constant search for innovation are common key values to both Garage Italia Customs and BMW,” adds Lapo Elkann, Chairman and Founder of Garage Italia Customs. “BMW i automobiles provide our designers with ideal opportunities for an artistic exploration of the future of mobility. The CrossFade project was a great opportunity to create something beyond the traditional idea of car painting, generating amazing effects with a unique geometrical pattern.”

The design of the concept cars now being shown in Paris was inspired by optical colour mixing, a technique already used in Pointillism of the late 19th century. This painting technique involves the creation of motifs using small and evenly distributed dashes of colour. Because the neighbouring colours are not intermixed, but only blend together in the perception of the viewer, a particularly intensive radiance is created. The selective variation of size and spacing of the individual dashes permits the creation of both precise and harmonious colour gradients.

On the body surface of the BMW i8 Garage Italia CrossFade, the accurately defined colour changes between Protonic Blue metallic and Protonic Dark Silver metallic are used to intensively underscore the lines and surface contours. Moreover, the applied dashes of paint are triangular. Resulting from this geometrical shape, both the overall impression as well as the plug-in hybrid sports car’s dynamics already symbolised in the design are accentuated even further. The colour design was realised using a complex painting process in which the car finished in Protonic Blue metallic was initially covered with a stencil film. In this way, it was possible to create the desired geometrical pattern with exceptionally high precision when the second layer of paint in Protonic Dark Silver metallic was finally applied. Moreover, the interior follows the BMW i8 Garage Italia CrossFade’s exterior design with the smooth transition from the dark silver of the front end of the car to the pure blue of the rear end printed on Alcantara textile that now covers the central tunnel, the side panels and the headliner. The surface structure of the interior and the seats in Foglizzo leather, and Protonic Blue and perforated Alcantara is effectively accentuated by the contrasting colours.

In the case of the BMW i3 Garage Italia CrossFade, the colour transition on the front end and the side panels flows in a vertical direction. The amount of blue decreases as it rises upwards to merge with the black roof and bonnet. The smooth transition is created by a transparent foiling with imprinted circular dashes of colour that symbolise the driving pleasure offered by the electrically powered five door car and become larger with increasing height. The distinctive colour design is also to be found in the interior, where high-quality textile and Alcantara surfaces additionally emphasise the premium character of the car. Base colour in each case is Protonic Blue, which is now also optionally available for the BMW i3 and exclusively in conjunction with the 94 Ah high-voltage battery.

BMW i is a brand of the BMW Group, playing the role of an incubator for networked mobility services, visionary vehicle concepts and a new understanding of premium which is strongly defined by sustainability. BMW i is represented in 50 countries with the BMW i3 (electric car for metropolitan regions) and the BMW i8 (plug-in hybrid sports car). BMW i also encompasses BMW iPerformance (all BMW plug-in hybrid automobiles), DriveNow (CarSharing), ReachNow (CarSharing 2.0), ChargeNow (easy access to the world’s largest charging point network), ParkNow (simple location, reservation and payment of parking spaces), the venture capital company BMW i Ventures (investment in start-up enterprises with a focus on urban mobility) and the BMW i Urban Mobility Competence Centre (consulting for cities).