2018 Honda Accord spied at the mall 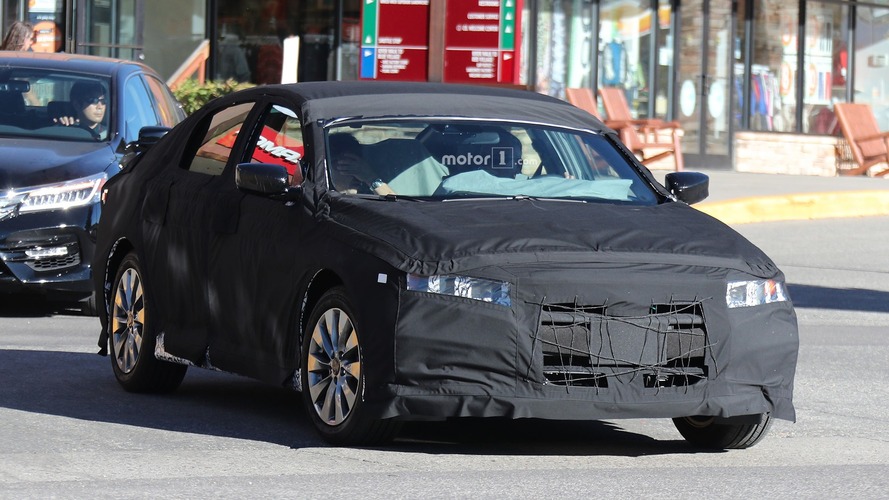 The new sedan adapts the Civic's sharp looks for a larger vehicle.

The 2018 Honda Accord continues to test on the road under heavy camouflage, and a new batch of spy shots give us a tiny peek into the interior. According to our spies, they caught this one at an outlet mall while benchmarking against a BMW 328i and Chevrolet Malibu.

The new Accord follows the styling direction from the latest Civic. These shots show the designers using cues like the downward sloping hood, narrow headlights, and fastback roof from the smaller model. Unless there’s a window there, the massive C-pillar might make rearward visibility a problem. However, Honda’s ample safety tech would likely mitigate the issue.

The interior remains under heavy camouflage, but two photos offer glimpses inside. There’s a broad panel with a metallic finish that houses the controls for the climate control. If the Accord's design follows the Civic, then the infotainment panel would be directly above it. Another photo shows the top of the dashboard, which is quite angular, but a shadow hides details about the instrument cluster.

Under the hood, expect Honda to continue the brand’s transition towards turbocharged engines. A naturally aspirated powerplant might be in base models, but the company's 2.0-liter turbocharged four-cylinder would likely appear in the other trims. We don't expect a V6 to be among the powertrain choices. There would still be a hybrid for buyers who prioritize fuel economy, though.

The next-gen Accord will share a modular platform with the latest Civic. Our spies think the new model looks just a tiny bit smaller than the current sedan. However, the long overhangs on this test mule actually make it appear a little larger.

Honda should debut the new Accord before the end of 2017. After the revolutionary overhaul for the latest Civic, we look forward to seeing the updates that the company brings to its larger sedan.