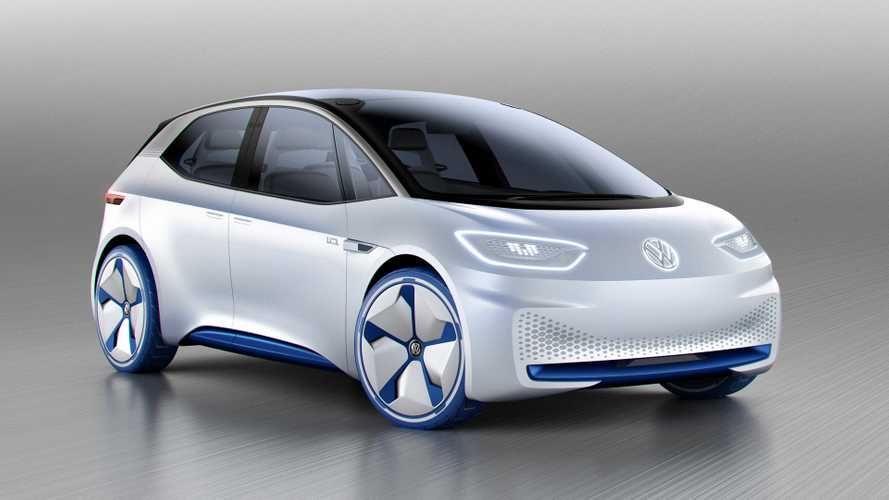 Previews a production car based on the Modular Electric Drive chassis.

Here’s a full look at the all-electric hatchback concept that Volkswagen is introducing at the Paris Motor Show. Expected to be roughly the size of the Golf, the concept previews the first production model to ride on Volkswagen’s new Modular Electric Drive (MEB) chassis.

The concept does indeed resemble a futuristic Golf hatchback, with aerodynamically sculpted lines, big showcar wheels, an enormous panoramic glass roof, and narrow LED light elements. Its tall greenhouse features enormous windows, while a prominent crease accentuates the bodysides. There are no traditional door mirrors, as they’ve been replaced by small cameras mounted on the fenders, presumably to reduce drag.

Volkswagen has released precious little information about the concept car but calls it an “iconic design study” that, the company boldly promises, could transform the car industry in the same way the original Beetle did. Look for more details and specifications on the concept later this week.

VW officials recently told reporters that a production version of this concept would offer an EV driving range of about 400 kilometers (248 miles) with even more range possible. They said the car could arrive by 2019, and that despite being the size of a Golf on the outside, it would offer as much interior room as a Passat. The MEB chassis used here was previously revealed on the Budd-e electric concept shown at this year’s Consumer Electronics Show. The modern-day Microbus-like EV is said to be headed to production by 2020.

Volkswagen’s theme at this year's Paris Motor Show is “Think New.”: with the world debut of an iconic design study, Volkswagen signals the brand's entry into a new era. The vehicle is as revolutionary as the Beetle was seven decades ago before it evolved into the world's best-selling car of the century. The concept car has the potential to make history with its completely new vehicle concept. The production vehicle which follows will be the first Volkswagen to hit the market based on the new Modular electric Drive kit (MEB).

Key facts – the I.D. in keywords

1. I.D. is the first Volkswagen in a completely new fleet of highly innovative electric vehicles.

2. I.D. is immediately recognisable as a zero-emission vehicle thanks to a newly developed design DNA for electric cars.

3. I.D. is driven by an electric motor with an output of 125 kW and has a range of between 400 and 600 kilometres on a single battery charge.

4. I.D. has an interior that offers an entirely new spatial experience with the Open Space.

5. I.D. will be launched as a compact electric car in 2020 parallel to the Golf.

6. As a concept car, I.D. gives us a first tangible glimpse of fully automated driving – this mode will be offered from 2025 onwards.

7. I.D. retracts its multifunction steering wheel into the dashpad when in fully automated mode ("I.D. Pilot").

8. I.D. can receive parcels using a new delivery service, if its owner isn't at home.

9. I.D. is the first compact Volkswagen based on the Modular Electric Drive Kit (MEB).

10. Volkswagen has set itself the goal of selling a million electric cars a year by 2025.