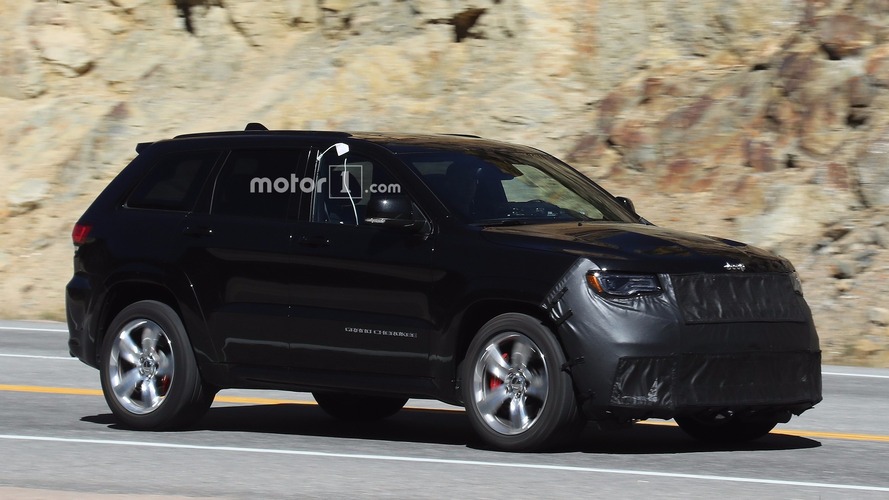 A monster of an SUV, the upcoming flagship Grand Cherokee will have upgraded internals to cope with the supercharged 6.2-liter V8 engine.

Europe has its Mercedes-AMG GLE 63 and BMW X5 M, while America is about to get this, the insane (in a good way) Jeep Grand Cherokee “Trackhawk.” The latest batch of spy images is depicting a near-production prototype with a camouflaged front end masking the beefier air intakes and the extra vent positioned below the grille to cool the engine.

Speaking of which, lurking underneath the hood is the mighty supercharged 6.2-liter V8 engine taken from the Dodge Charger and Challenger Hellcats. In those two, the Hellcat motor unleashes 707 horsepower (527 kilowatts) and 650 pound-feet (880 newton meters), but it will be interesting to see whether the Trackhawk will get the full power.

One thing is for sure, the range-topping Grand Cherokee is going to adopt an upgraded suspension with extra bracing as evident in the attached spy images. Enlarged brakes and a series of other hardware tweaks are also in the works to match the immense power generated by the engine. Even if it won’t get all 707 ponies, the new crown jewel of the range will have substantially more oomph than the 6.4-liter V8 HEMI engine inside the 475-hp SRT variant.

Jeep has already announced the high-powered SUV will be able to deliver some mind-blowing performances, with the 0-60 mph (0-96 kph) sprint set to take only three and a half seconds. That’s going to make it 1.1 seconds faster than the SRT version. There’s no word about the top speed, but an increase over the Grand Cherokee SRT’s 157 mph (253 kph) seems likely.

The two performance-oriented models are expected to co-exist once the Trackhawk will go on sale in July 2017 at a significant premium over then $65,495 SRT. We probably won’t have to wait until then to see it, since Jeep will likely have it ready for an official reveal in the first months of the year. Here’s hoping it will be on display in January at the North American International Auto Show in Detroit.