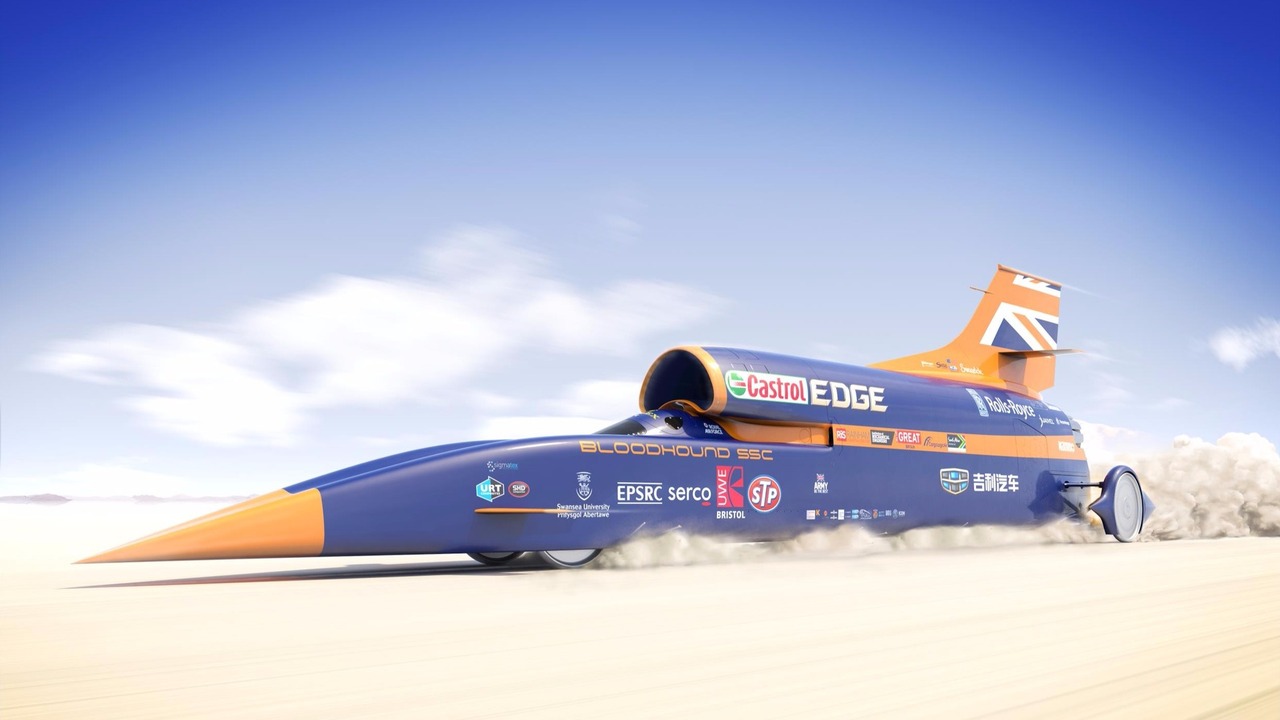 The Chinese automaker steps in as lead sponsor, still on course for fall 2017 record attempt.

The Bloodhound land speed record project has been saved by a much-needed funding boost from Chinese automaker Geely. The three-year agreement should see the project through to its ultimate aims of reaching 1000 miles-per-hour (1600 kilometers-per-hour).

The project began in 2008 and steadily progressed through the initial design, development, and build stages. Momentum picked up through 2014 and 2015, the Bristol, England-based team finalizing the design and completing a trial build. The Bloodhound SSC rocket car made a hugely popular public debut in London last September, but the project came to a halt as funding ran dry.

In August of this year the deal with Zhejiang Geely Holding Group - which owns Volvo - was struck, safeguarding the future of the project. Test runs and systems checks are scheduled to take place in the UK early next year, before the whole operation heads out to the Hakskeen Pan in South Africa in the fall for a first attempt to break the land speed record.

Driver Andy Green will attempt to reach 800 mph (1300 km/h), which would beat his own existing land speed record by 37 mph (59 km/h). If the team is successful, it will return to shoot for the 1000 mph barrier, but a timeframe has not yet been set out for that.

Geely’s deal with Bloodhound includes both financial and technical support. It will also see Bloodhound’s education program extended to China. The Bloodhound roadshow has already toured five continents, while 5500 UK schools and others in 10 countries have taken part in the Model Rocket Car Challenge.

Bloodhound SSC is powered by an EJ200 jet engine usually found in the Eurofighter Typhoon fighter plane, and a Nammo hybrid rocket. There’s a supercharged Jaguar V8 engine, as well, acting as the rocket’s fuel pump.

Bloodhound project director, Richard Noble, said: “We could not have a better partner than Geely; not only are they an international technology company with tremendous vision and capability, they share our passion for innovation and education. Their support means we can now plan next year’s record-breaking challenge with confidence.”

The BLOODHOUND Project today announced Zhejiang Geely Holding Group (ZGH) as its prime sponsor and Official Automotive Partner in a 3-year agreement. The leading Chinese automotive group will provide technical as well as financial support to the Project and promote its Inspirational Programme throughout Asia.

The deal, signed in August, is the largest in the history of the Project and means plans for challenging the World Land Speed Record in 2017 are now back on track.

Project BLOODHOUND is a British initiative with truly global reach. Followed in over 200 countries, its roadshows have toured Europe, Canada, South Africa, Brazil, India and China.  The Model Rocket Car Challenge is now rolling out across 5,500 UK schools and 10 countries while the UK’s Great Campaign, an official partner to the Project, uses BLOODHOUND to promote UK skills worldwide.

The partnership will see Geely Auto technology being used within BLOODHOUND SSC; Geely Group vehicles being used in South Africa throughout record campaigns; design and engineering support being provided, where required, to help the Project achieve its goals; promotion of BLOODHOUND across Asia and the team’s STEM inspiration programme rolled out across China.

BLOODHOUND Project Director, Richard Noble, said, “We could not have a better partner than Geely: not only are they an international technology company with tremendous vision and capability, they share our passion for innovation and education.  Their support, both technical and financial, means we can now plan next year’s record-breaking challenge with confidence. It also means we can take our STEM inspiration message to a vast new audience, which is great for science and engineering but also for promoting Great Britain.”

Li Shufu, Chairman, Zhejiang Geely Holding Group, said, “We are proud and excited to be part of this extraordinary team. Geely shares the same challenging spirit and passion for pushing technological barriers as the BLOODHOUND Project.

“Since day one we have been committed to breaking technology barriers at Geely and working with Project BLOODHOUND will help further our mutual technology breakthrough to an international audience. It also means we can tell millions of young people, in China and around the world, about the opportunities presented by studying science, technology, engineering and mathematics.  That is what makes this ‘Engineering Adventure’ so special and why we wanted to be part of it.”