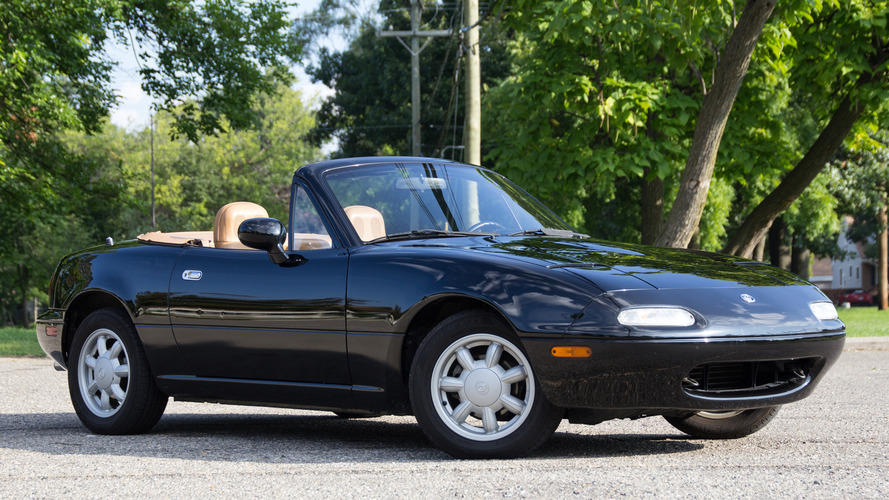 Our Man About Town introduces his most ardent escort (not a Ford).

Love at first sight is fleeting. Iin the end, first impressions fade. Expectations are not met and desire disappears. The day-to-day drudgery of life dispels romantic notions and you end up wishing for something different to bring back that rush.

I’ve always been a fan of power. Hellcats and G-Wagens get my engine rumbling. The sound of V8 cannot be replicated with fewer cylinders. So it’s seems odd to me that I have fallen in love with a 116-horsepower, 2,200-pound, 1993 Mazda Miata.

Really, we started out as friends this summer. I picked her up for $5,500, a fair price for a 23-year-old with 56,000 miles on the odometer. She wasn’t perfect by any means. There were nicks and scratches on her black body, and there was a piece of marine tape across the back plastic window. The brown leather seats showed some signs of age, and the dual cassette deck and CD player suggested she was past her technological prime. But I’ve got my own cracks in the leather and scars to remind me of when I too was indestructible.

At six feet tall and 220 pounds, I’m about as a big of a person who can drive it comfortably.

At first, I thought the 1.6-liter four-cylinder engine was a little underpowered. Back in 1993, Mazda claimed this Miata could go from 0 to 60 miles per hour in 8.3 seconds and had a top speed of 115 mph. It could rip through the quarter mile in 16.7 seconds. All of those numbers just seem quaint today, considering the 2016 MX-5 can hit 60 in 5.8 seconds with its 2.0-liter, 155-horsepower, four-cylinder engine. I doubt mine could hit 90 mph now, and I could time it on the quarter with a day planner.

The five-speed manual sticks a little in the gate when trying to find second and the trunk can barely fit a backpack. At six feet tall and 220 pounds, I’m about as a big of a person who can drive it comfortably. And since owning it, my Miata averages 24 miles per gallon. Today, some fullsize pickups top that.

I can’t honestly say that it’s a beautiful vehicle. It’s cute, but not striking. The old Mazda logo is almost as ill-defined as the car’s front end. Its profile, perhaps its best side, gives it a solid line but there’s nothing overtly aggressive in its styling. Truly, it’s simply amazing that this first-generation bodystyle single-handedly saved roadsters for the world.

Even getting out of it can be a hassle. The car is so low to the ground that I brace my arm against the rear quarter panel to hoist myself up. That low-slung body also means that when you’re in traffic, all you see are people’s door handles.

This Miata – my Miata – is pure driving pleasure.

But she’s as reliable as the sunrise and every day I drive her, I found myself looking forward to it more.

Perhaps the first sign that this was getting serious was when I realized every morning, I would put sunscreen on before leaving the house. Driving with the top down is just understood. Sunny days, cloudy days, even a slight drizzle won’t keep the top up. Two latches and a quick push of the roof opens up the sky. While I can’t pull the roof up with one hand out of fear of requiring Tommy John surgery, I can manage it easily with both arms. Twenty-three years later, the system’s simplicity remains its most powerful virtue.

And that’s where the love started to grow. This Miata – my Miata – is pure driving pleasure. The steering feels perfectly weighted, whether driving around town or on the highway. The short-throw shifter glides into every gear (except second on the downshift). The clutch pushes in easily and grabs each gear as you begin to let it out.

Better yet, that low body and 89.2-inch wheelbase makes the Miata feel like it’s on rails going around the corners. Day by day, corners get faster. There may not be a lot of power under the hood, but it feels quick. It’s a 13-foot go-kart that can park just about anywhere. There’s little body roll, the suspension can even hold up to Detroit’s roads – a great proving ground – mostly because it does not come with low profile tires (which have proved pointless in Detroit). The rear-wheel drive will even chirp the tires from time to time, though, admittedly, it’s entirely accidental.

Its driving purity proves how today’s technology has stripped people of pleasure behind the wheel.

The five-gauge instrument cluster is equally as simple: fuel, speed, tach, oil pressure, and temperature. Does anyone need anything else? The headlights pop up out of the hood when you turn them on – creating an extremely gangly front end, but one that casts light on the road.

It’s this simplicity that makes the car so appealing. I don’t miss all of those gizmos loaded into today’s cars. There are no distractions, just driving. My lane-keep assistants are my hands. My navigation system can be folded up and kept in the glove box. And if I really need a boost to my entertainment system, I bought a Bluetooth cassette that connects to my phone and plays music through the stereo (which features headrest speakers that, when you turn up the bass, feels almost as good as a massaging seat).

I don’t mean to bash all of the advancements today’s cars hold over ones from the early ‘90s. Today’s cars are mostly better. They’re bigger, more powerful, faster, and more efficient than everything back then. I’ve owned my fair share of old cars – and most of them are awful vehicles on the road powered by leaded gas and nostalgia. But not with this particular Miata. Its driving purity proves how today’s technology has stripped people of pleasure behind the wheel. That exhilaration of the open road, lining up a corner and mashing the accelerator as you pass the apex.

I know my Miata isn’t perfect. It doesn’t have to be. It’s still small, underpowered, and a little bit ugly. But it’s mine. It’s paid for. And I smile every time I turn the key and her engine comes to life. True love requires commitment and mutual understanding. True love comes with both sides getting more out of the relationship than they give to it. True love takes work and an occasional oil change. I’m looking forward to a long and lasting relationship with this car, for better or worse.