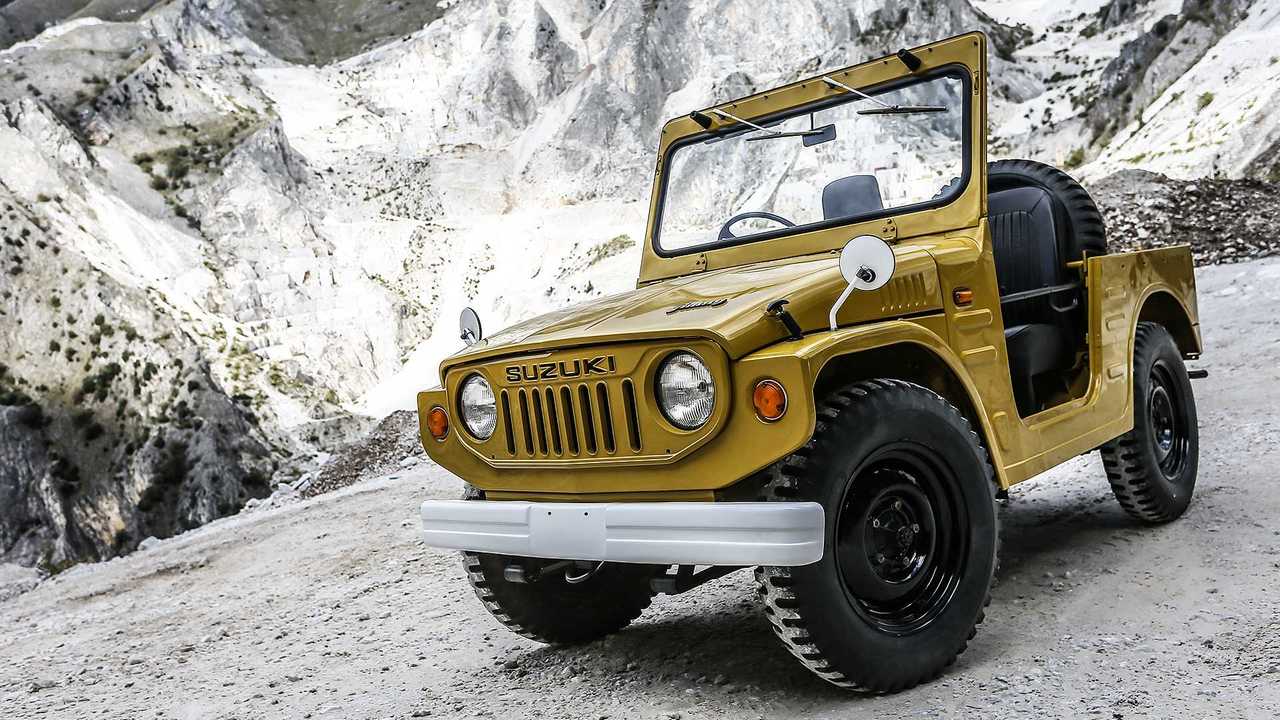 The off-roader’s history begins in 1970 with a two-cylinder engine.

This year saw 50-year celebrations of many famous models, from the Citroën SM to the De Tomaso Pantera, from the Lamborghini Jarama to the Alfa Romeo Montreal and the Range Rover. Among the many celebrations, however, there is also the Suzuki Jimny that has risked going almost unnoticed. It came from grand ambitions, and today remains an efficient SUV, arriving with the same spirit of the original.

Hardcore And Pure Since The Beginning

To date, the Jimny is, in fact, the only "real" small off-road vehicle on the market, able to keep up with the times without betraying its initial vocation.

And if it seems trivial, let's think about how many other hardcore models have disappeared or have radically changed their essence,  turning into sophisticated SUVs because tradition was no longer compatible with modern needs. This is how it all started.

A Kei Car To Go Everywhere

The origin of Jimny is that of most Japanese cars of the post-war period, the so-called "Kei cars," which had to respect size and displacement limits in a country where space was already becoming scarce.

Making a virtue out of necessity, Suzuki designers started in the 1960s to work on a 4x4 vehicle that would exploit its extreme compactness to achieve even better off-road performance. The first series, signed LJ10 and already named Jimny, saw its first light in 1970, after a long and demanding period of testing and refinement, from drop tests from one meter to various tests on the hostile volcanic sands of Mount Fuji.

Less than three meters (9.8 feet) long and with a wheelbase of just 1.93 meters (6.33 ft), the first mass-produced 4x4 model was introduced in this popular market segment. The first version offered three seats, an open body with a canvas cover, and an air-cooled 360-cc two-stroke engine with 25 horsepower (18 kilowatts).

Catch Up On The Latest Jimny News:

A chassis with side members and crossbars, a leaf spring suspension, and a rear reducer, combined with a weight of only 600 kilograms (1,322 pounds), allowed it to go where larger 4x4s struggled to reach.

That first generation was very long-lived and had spawned variants, some of which followed the evolution of the Kei car regulations, which became more permissive in terms of size and displacement over the years.

After the LJ20 series arrived in 1972 with a liquid-cooled engine and a few more horsepower, the LJ50 debuted with a 539-cc three-cylinder in 1975, the first model to be exported to America, Western Asia, and Oceania.

The last version of the LJ, the LJ80, arrived in '77 with a four-cylinder four-stroke 800-cc engine, and a more decisive restyling of the bodywork that also included wider wheel arches at the front and more protruding at the rear. By the end of its career, the LJ generation was sold in over 100 countries and had over 240,000 units produced.

The second generation, SJ410, was developed as a global model in response to the growing demand for small 4x4s for everyday and city use, focusing for the first time on an attractive design, with an eye to the female public, as well as practicality.

On many foreign markets, the name Jimny had been replaced by others, especially Samurai. Its name has become popular in Italy, helping to increase the reputation of the Japanese brand.

The chassis remained classic (it would never be changed in setting, although it evolved in design and construction) and continued to use leaf springs, but with improved angles of attack and departure, while the engine increased to 1.0-liter and 45 hp (33 kW). In 1984 came LJ13, a renewed version with a 1.3-liter engine, the maximum displacement ever touched by Suzuki until then, making the small off-road vehicle a sort of flagship for the brand.

Production reached 10,000 units per month, 70 percent of which were destined for export. Gradually, the technical equipment also grew, including power steering and a five-speed transmission while replacing the leaf springs with coil springs. The model range was also expanded with extended wheelbase models measuring just over four meters (13.1 ft), closed bodies, and even a pickup. On the versions produced in Europe, a Peugeot diesel was also offered.

In 1998, after almost 18 years on sale and just under 1.7 million units produced, the third-generation Jimny arrived. It represented a small revolution in styling thanks to a rounded and fashionable design destined to ensure that the new model would remain on the market for an incredibly long time – 20 years and nearly 1 million units sold.

For the first time, four-wheel-drive engagement was also possible on the move, using the classic lever that, with the 2008 restyling, was replaced by a three-button electric system to engage traction. A 1.3-liter mill (since 2005 with variable timing, and since 2008 with an automatic transmission) was offered alongside, between 2004 and 2011, a Renault diesel making 68 or 86 hp (50 or 64 kW). The mill was identifiable by the addition of an air intake on the hood.

The latest act of the Jimny epic is on the road: the fourth-generation model, launched in 2018, retains the compact off-roader's essential features, from the measurements to the chassis. It pays homage to its origins with an angular and "metallic" design and the classic four-wheel-drive lever while offering equipment in step with the times. This includes an updated multimedia system with a central touchscreen, a 1.5-liter petrol engine with 102 hp (76 kW), and automatic transmission available as an option.