2021 Ford Bronco Vs Wrangler And Defender: Round Two, FIGHT! 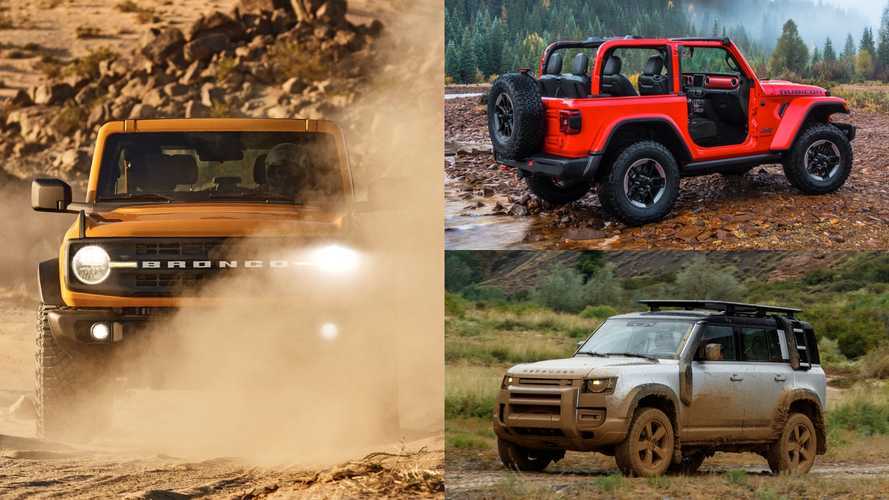 The three legends will square off in dealer showrooms once again early next year.

Ford unveiled the 2021 Bronco after years of anticipation, and the resurrected and revitalized off-roader looks very impressive. Depending on how you categorize off-roaders, it might be the first legitimate challenger to the Jeep Wrangler in decades, but Ford has another SUV to worry about. The newly redesigned Land Rover Defender, arriving in dealerships right about now, offers a slightly more upmarket take on the rugged-SUV formula.

The last time these three SUVs were available to U.S. consumers, Bill Clinton was preparing for his second term as president, Atlanta hosted the Summer Olympics, and the Nintendo 64 was the hot holiday wish-list item for children nationwide. That was 1996, the year that Ford officially withdrew the Bronco from the market. The aspirational Land Rover Defender left the U.S. only a year later (inspiring many imitators and restoration companies to fill the gap), leaving the Jeep Wrangler the de facto king of open-air off-roading (of course, the one-size-smaller Chevrolet Tracker and Suzuki Vitara convertibles persisted a few more years, but neither posed much of a threat to the Wrangler).

For 2021, the Bronco, Wrangler, and Defender will once again face each other in a dealership battle royale, marking only the second time in history that Americans could choose from the three SUVs. The Bronco ($28,500) and Wrangler ($28,295) are priced similarly, while the Defender ($49,900) offers a more upmarket take on off-roading, with a price to match. For example, that 50 large could get a top-spec Wrangler Unlimited Rubicon Recon ($46,950) or Bronco Wildtrak ($48,875). So which one is best, on paper, at least?

Exterior size is a critical component in trail capability – narrow and short are the order of the day, paying dividends in maneuverability and off-road angles. Here, Ford, Jeep, and Land Rover each offer the customer two wheelbase options.

Comparing the numbers, each of the off-roaders are within spitting distance of one another. The Bronco, both two- and four-door, is longer and wider than its Jeep equivalent, although the four-door has a shorter wheelbase than the Wrangler Unlimited. The Defender 90 and 110 are larger in almost every exterior metric than their Ford and Jeep competitors, however.

The ground clearance crown goes to the Bronco, although its approach, departure and breakover angles are middling. The winner of that contest might be the Defender, with surprisingly steep numbers for breakover and departure – credit the Defender’s available height-adjustable air suspension and well-tucked underbody components for that. One thing is certain, both the Defender 110 and Bronco four-door will drag their bellies far less often than the Wrangler Unlimited.

The 2021 Ford Bronco, Jeep Wrangler, and Land Rover Defender each offer an assortment of four- and six-cylinder powertrains. The Bronco and Defender rely exclusively on turbocharged engines, while the Jeep and Defender offer mild-hybrid technology in certain configurations. And devotees of oil-burning torque will find joy in only one of these SUVs: the Wrangler EcoDiesel.

Maximum power comes with the Defender’s optional 3.0-liter V6 with mild-hybrid technology. That electrification doesn’t help the Defender’s efficiency at all, however. Predictably, the efficiency (and torque) champ is the Wrangler’s optional EcoDiesel V6, achieving an impressive 25 mpg combined. It must be noted that the Bronco’s standard 2.3-liter EcoBoost inline-four offers the most standard torque by a fair amount, and we must admit we were impressed with its barely noticeable turbo lag in the Ranger pickup. However, we’ll concede that the base Wrangler V6’s simplicity, reasonable (if not class-leading) power, and good efficiency numbers are a tempting combination.

In this category, both the Bronco and the Defender handily outstrip the Wrangler. Although the Jeep offers locking front and rear differentials and front electronic sway-bar disconnect for maximum traction and articulation, the Bronco offers the same and adds capability with a sway-bar unlock that can activate during articulation events. The Bronco also offers FordPass Performance, an app that includes off-road navigation and planning features.

Meanwhile, the 21st-century Defender boasts unusual-for-an-off-roader unibody construction, improving its on-road handling at the expense of some absolute capability. Helping it claw back some of that trail cred is a height-adjustable air suspension that offers up to 11.5 inches of ground clearance. Also, Land Rover is no stranger to adventure vehicles, which is why the Defender can ford up to 35.4 inches of standing water.

Details on the Ford Bronco’s capability are a bit shallow, but we know that it will be able to tow up to 3,500 pounds for both the two- and the four-door. The Wrangler four-door matches that trailering capacity, although the two-door is limited to 2,000 pounds. The Land Rover Defender 90 and 110 both shame those numbers with a maximum towing rating of 8,201 pounds, although using an unbraked trailer caps that at 1,653 – reasonable limits for a freewheeling towable.

Helping lug that sport boat out of the water will be easy work in the Bronco thanks to a crawler gear ratio in its available seven-speed manual transmission. Equipped with the stick and the optional lower-range transfer case, the Bronco has a maximum crawl ratio of 94.8:1 – by contrast, the Wrangler’s best crawl counter is 84.2:1. The Defender goes home with its tail between its legs, thanks to a rather unimpressive 56.6:1 crawl ratio.

It must be said that the last time the Defender was available in the US, it could be had with a soft top or a removable hard top, at least in two-door form. Those days are over, and now all Defenders are fixed-roof SUVs. The same fate doesn’t befall either the Jeep Wrangler or Ford Bronco, which offer several different roof removal solutions. Their doors even come off, for heaven’s sake!

Off-Road And Ready To Play:

Declaring a winner in this battle is close. The Bronco’s doors and roof panels can be stored in the cargo area, while the Jeep’s doors have to remain at home since they’re so large. What’s more, the Bronco’s sport bar wraps over behind the rear seats, ensuring an uninhibited view of the sky above for both rows of occupants (the Wrangler’s roll bar crossmember runs even with the B-pillar, pinching some of the view for rear-seaters). Of course, the Wrangler offers a folding windshield, while the Bronco’s forward glass is fixed. So while declaring an “al fresco fun” winner is difficult, the loser is obvious: Defender.

In this theoretical standoff, it's hard to declare a winner. Of course, the Defender's bucks-up pricing will likely turn off many potential customers, though its surprisingly pleasant balance of ruggedness and luxury will win it fans. The Bronco is an upstart in this matchup – even ignoring the Wrangler's three-plus decades of continuous production, the Jeep's CJ predecessors outdate even that first 1966 Bronco – likewise the Land Rover Series SUVs. The JL Wrangler represents a more restrained, old-school approach to off-roading, which is attractive to hardcore upfitters, no doubt.

However, in our eyes, the Bronco appears to be a serious contender, offering 95 percent as much ruggedness as the Jeep with a bit more on-road comfort and some added technological gizmos, all at a discount price relative to the Defender. Without a doubt, the 2021 Ford Bronco will give both Jeep and Land Rover a lot to think about when the time comes to update their products, ultimately resulting in better vehicles for the consumer. Everybody wins.