Is The Lexus LC 500 The Best Lexus Ever? 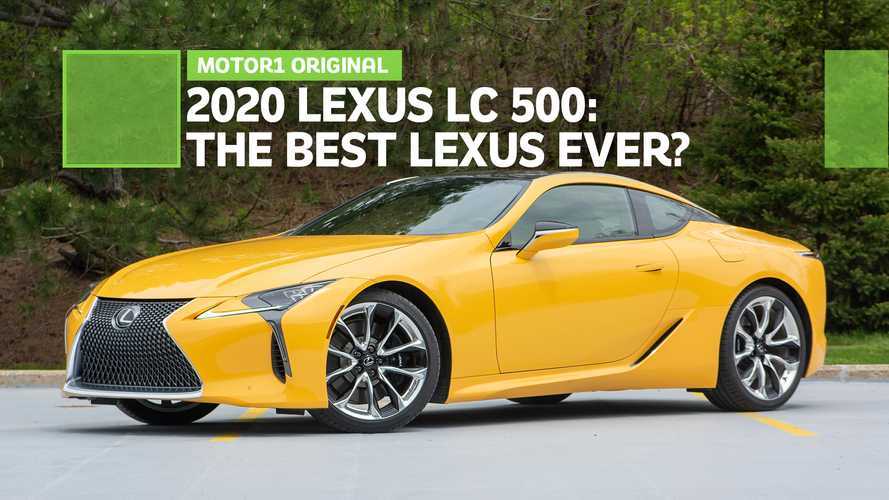 And yes, we’re counting the LFA.

Let me answer the question in the headline first: yes, the LC 500 is the best Lexus ever. It outdoes the 1990 LS with a refined, luxurious cabin and a quiet, composed character. And it bests the LFA by offering 75 percent of the driving experience in a more practical, livable, package that costs literally a quarter of the price.

There's no better example of the Lexus brand, and all the things it stands for, than the LC 500. From the immaculate interior to the stunning engine, the LC is as good as Lexus gets.

This is, inarguably, a controversial position. The LFA is a legend that will go down as one of the last decade's great cars, a six-figure, limited-run performance masterpiece. But the LC hits most of the same bullseyes for a fraction of the price. And I'm not kidding when I say a fraction – the limited-run LFA started at $375,000, while the LC 500 costs $92,950. That's approximately 25 percent. In other words, the LFA is nearly four times the price of a new LC 500. And unless exclusivity really, really matters to you, spending four times as much doesn't quadruple the performance.

The LFA benefitted from a stunning 4.8-liter V10 that screamed like an automotive banshee. As the story goes, it revved so quickly that a traditional tachometer couldn't keep up, so designers drew up the digital tach that now features prominently in all of Lexus F and F-Sport products. The LFA is still one of the best sounding cars in automotive history. Performance was impressive, too, with 553 horsepower ushering the slinky LFA to 60 in a scant 3.7 seconds (awfully brisk back in the early 2010s). It was light, thanks to a carbon fiber-reinforced-plastic body and impressively agile and while not pretty, the design was expressive and eye-catching in a way no Lexus had ever been before. The LFA was a legit supercar.

The LC is not. Power and performance are down along with the cylinder count – the LC's 5.0-liter V8 is short two cylinders and pumps out just 471 horsepower. The only carbon fiber-reinforced plastic on this car is on the roof (and it's optional), so the weight is up too – in fact, the LC weighs 1,000 pounds more than the LFA, at 4,280, which is a big reason behind its leisurely 4.4-second sprint to 60.

Those are all sizable differences, but none are so massive that they’re worth paying four times the price. And when you consider how well the LC mirrors the LFA, the value proposition is even clearer. For a start, the newer coupe improves on the sleek, sexy styling of its predecessor, with cleaner lines, more expressive details, and refinements that only come after an older vehicle spends a few years in the spotlight. It's a thoughtful evolution of the original Lexus LF concept cars that preceded the LFA.

The LC's interior is vastly superior, with higher-quality materials, more artful designs, and small quality of life updates, like a seatbelt that actually buckles and cup holders (although both cars have horrid infotainment systems). There is even a pair of relatively spacious backseats – the four-seater offers 32.5 inches of rear legroom, or more than you get in a Corolla.

The LC's interior is vastly superior, with higher-quality materials, more artful designs, and small quality of life updates, like a seatbelt that actually buckles and cup holders.

The LC sounds fantastic, too, especially while upshifting and downshifting, where the rapid cog-swapping of the 10-speed automatic allows the 5.0-liter to elicit barks and howls that drip with character. And when it comes time to put the LC through its paces, that sublime 10-speed automatic and a multi-link rear suspension offer a balance of performance and comfort that's hard to match.

The LFA is, as I said, a legend. But it was a one-off, limited-run freak show of a car that, despite its outrageousness, didn’t really embody the Lexus brand all that well. Eight years later and with new examples still available, it seems more like a proof of concept while the LC 500 feels like the vehicle Lexus set out to build all those years ago, a needle-threading coupe that offers the LFA's attitude and driving character with none of the day-to-day drawbacks and a far lower cost of entry.

The original Lexus LS set an incredible trend when it debuted in the late 1980s, establishing the nascent brand as a manufacturer of high-quality luxury vehicles. But more than that, it forced German automakers to adapt to a new reality, where affordability and luxury weren't mutually exclusive.

In a comparison with the Bentley Turbo R, Mercedes-Benz 560SEL, and BMW 750iL, Car and Driver legend William Jeanes wrote “The combination of a comfortable interior, a silky 250-hp double-overhead-cam V-8, and an almost supernatural attention to detail makes the LS 400 at home in any company, including this aggregation.” The LS bested the Bentley, although it finished behind the range-topping variants of the S-Class and 7-Series.

Change the name and the output, and Jeanes' praise would surely fit the LC 500. This is (mostly) a world-class cabin that avoids the trappings of traditional luxury or high-performance. There's no wood and barely any carbon fiber – just supple leather, soft Alcantara suede, tasteful metal accents, and subtle plastics.

This is (mostly) a world-class cabin that avoids the trappings of traditional luxury or high-performance.

The door panels should hang in museums, so more people can admire the flowing lines of the suede and leather and the gorgeous aluminum door pulls, while the dash is resplendent in its strict, horizontal focus, with strong lines high and low. Matched up with a tall center tunnel and supportive, well-bolstered seats, the LC's cabin is a delightful place to take in the sites.

But it's also quiet while underway. Shush up the 5.0-liter V8 engine, select tenth gear, and engage the adaptive cruise control for full grand-tourer mode. The LC is quiet and its ride, while not as marshmallow-like as the LS Jeanes tested 30 years ago, makes mincemeat out of all but the biggest imperfections. The LC's sleek shape manages the air well, too, so there's little wind noise. Even the optional 21-inch wheels and low-profile tires can't ruin this Lexus' composed ride.

Lexus is a young brand, with its 31st birthday just three months off. It will build better, more complete cars. But for now, the LC 500 is peak Lexus. There's no better example of the brand's product ethos or character. Prices start at $92,950, although the car featured here carried a price tag of $106,440, including a $1,025 destination charge.