A typed version of this story can be found further down the page. 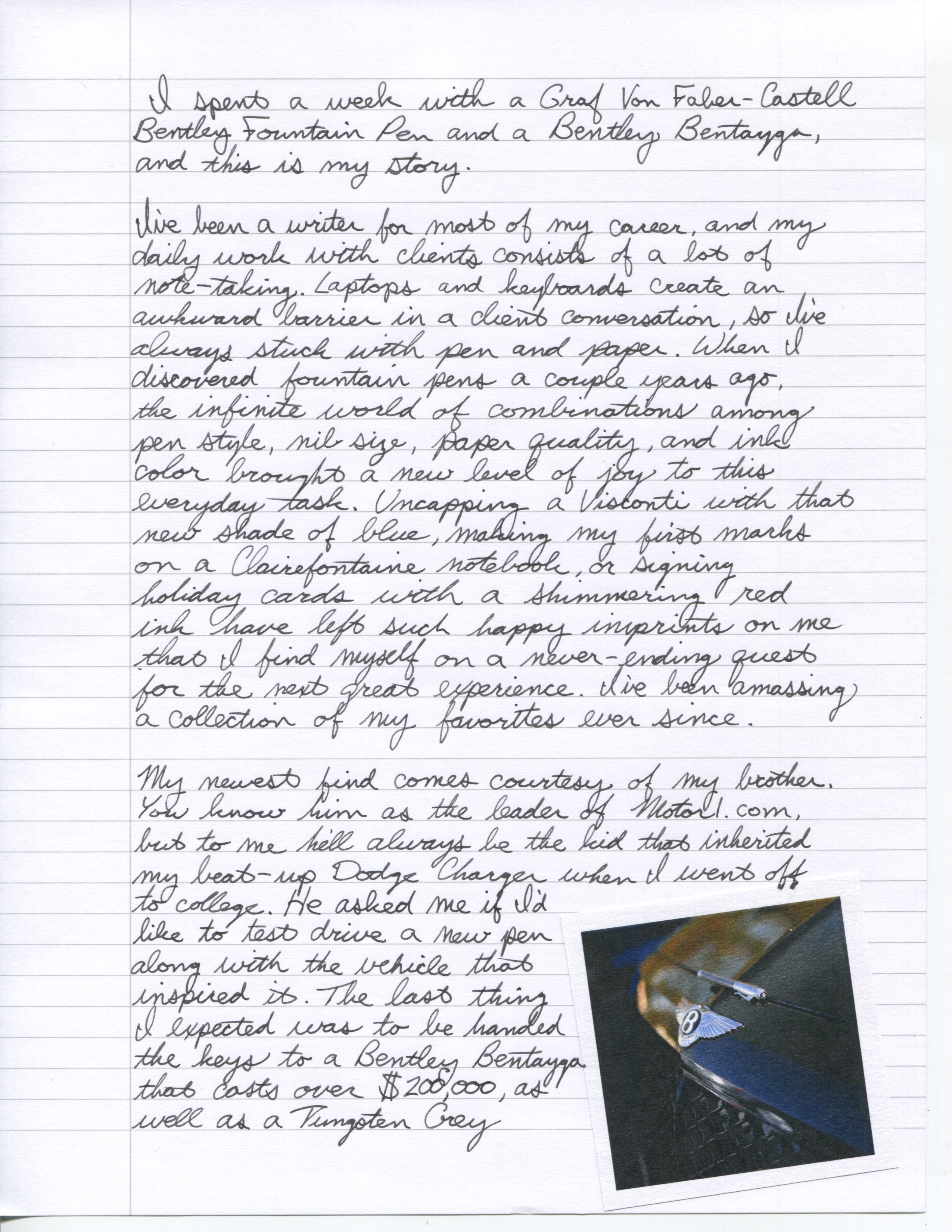 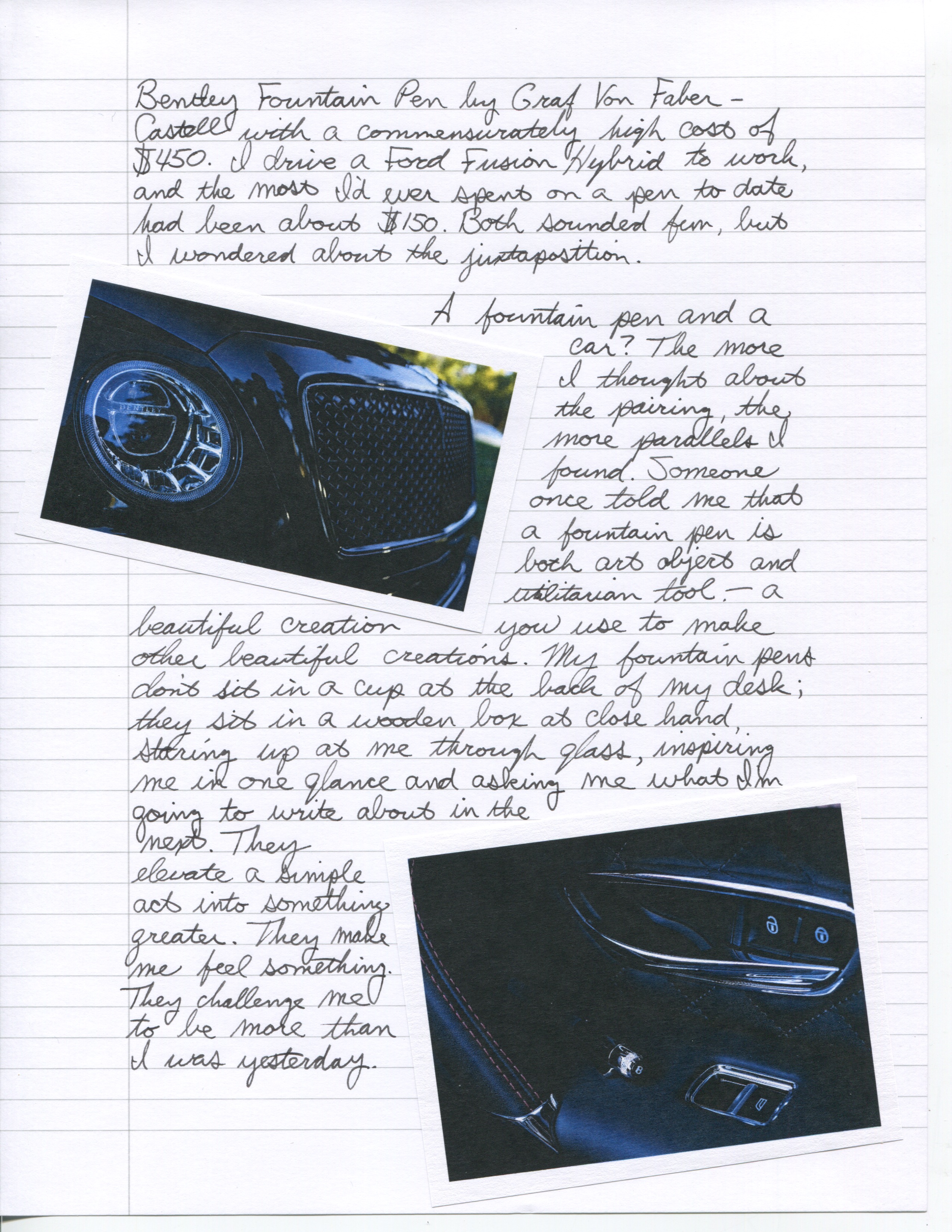 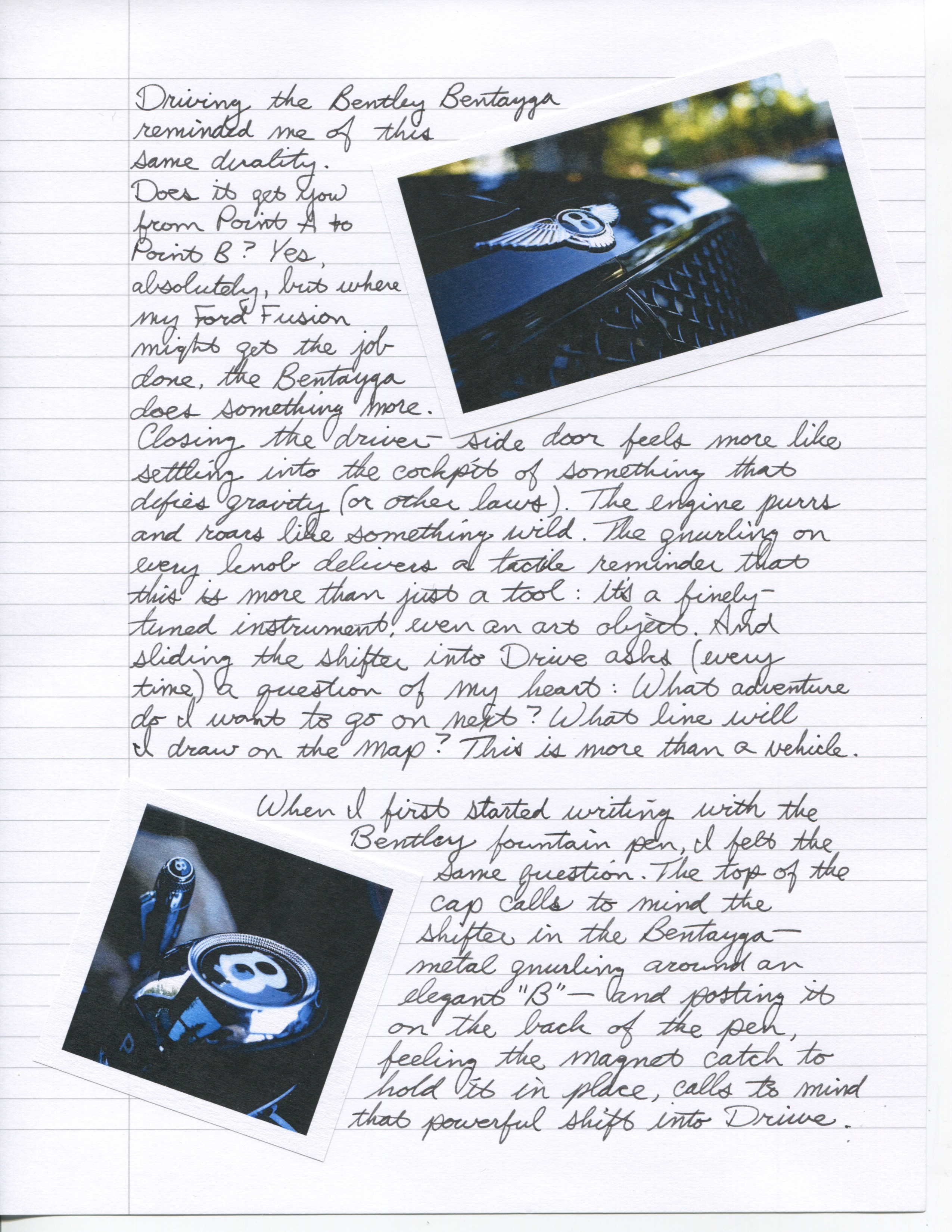 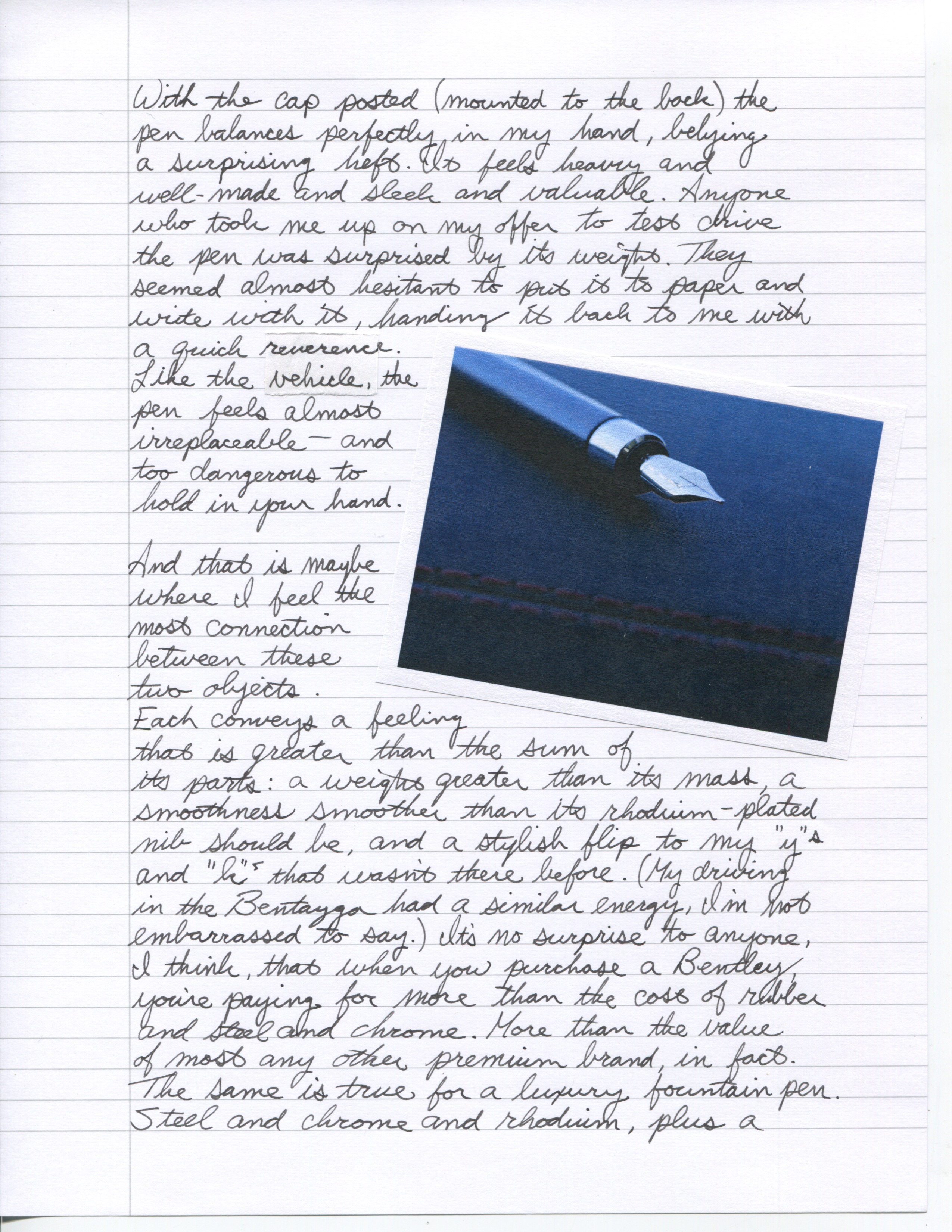 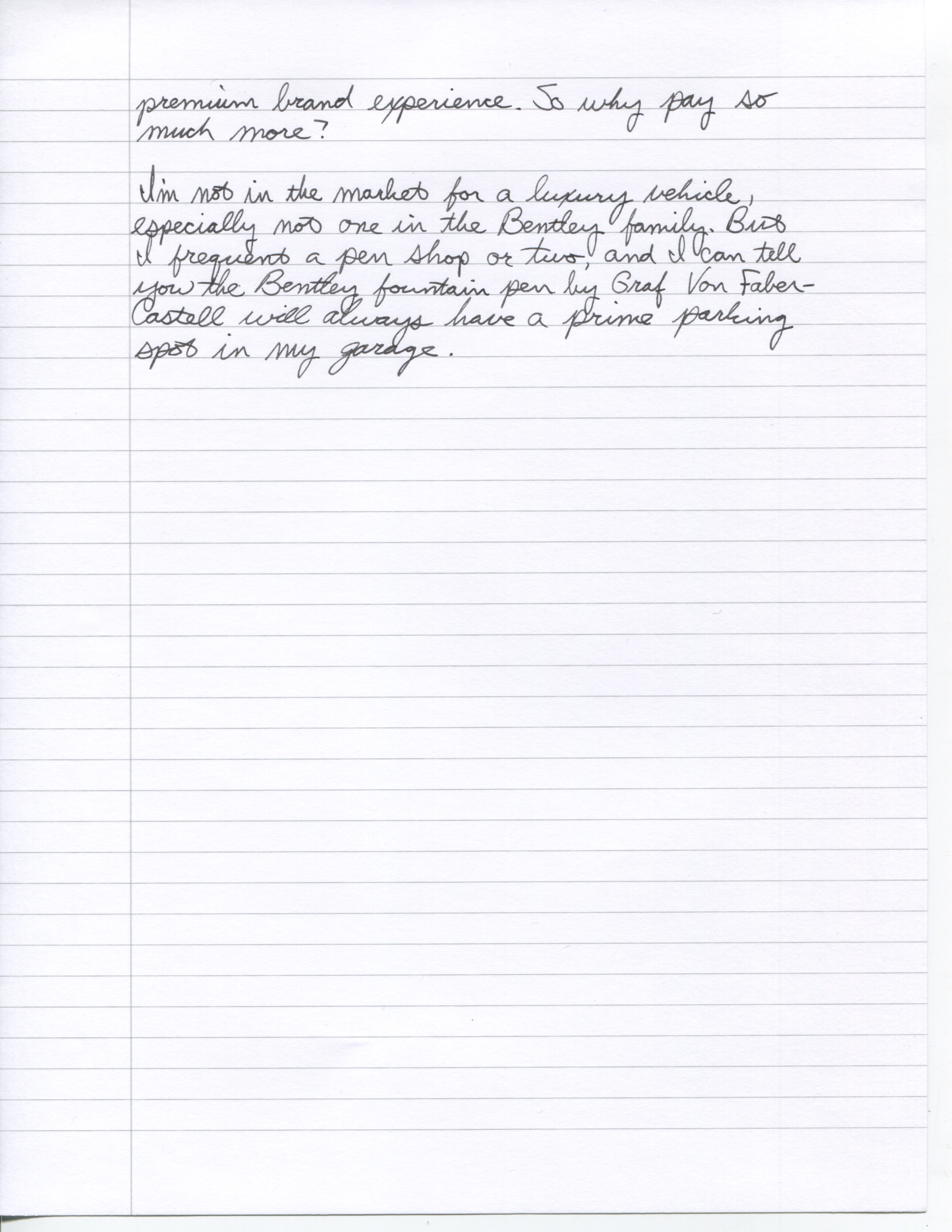 Doug Neff is Content Director at Duarte, Inc., an executive speaker coach, and brother of Motor1.com Global Editor-in-Chief John Neff. An avid collector and enthusiast of fine writing instruments, he was happy to receive this assignment from his younger brother and is open to more work as a writer about fine writing instruments and automobiles.

The Bentley Fountain Pen Is The Bentayga Of Writing Instruments

I’ve been a writer for most of my career, and my daily work with clients consists of a lot of note-taking. Laptops and keyboards create an awkward barrier in a client conversation, so I’ve always stuck with pen and paper. When I discovered fountain pens a couple years ago, the infinite world of combinations among pen style, nib size, paper quality, and ink color brought a new level of joy to this everyday task. Uncapping a Visconti with that new shade of blue, making my first marks on a Clairefontaine notebook, or signing holiday cards with a shimmering red ink have left such happy imprints on me that I find myself on a never-ending quest for the next great experience. I’ve been amassing a collection of my favorites ever since.

My newest find comes courtesy of my brother. You know him as the leader of Motor1.com, but to me he’ll always be the kid that inherited my beat-up Dodge Charger when I went off to college. He asked me if I’d like to test drive a new pen along with a vehicle from the brand that inspired it. The last thing I expected was to be handed the keys to a Bentley Bentayga that costs over $200,000, as well as a Tungsten Grey Bentley Fountain Pen by Graf Von Faber-Castell with a commensurately high cost of $450. I drive a Ford Fusion Hybrid to work, and the most I’d ever spent on a pen to date had been about $150. Both sounded fun, but I wondered about the juxtaposition.

They elevate a simple act into something greater.

A fountain pen and a car? The more I thought about the pairing, the more parallels I found. Someone once told me that a fountain pen is both art object and utilitarian tool – a beautiful creation you use to make other beautiful creations. My fountain pens don’t sit in a cup at the back of my desk; they sit in a wooden box at close hand, staring up at me through glass, inspiring me in one glance and asking me what I’m going to write about in the next. They elevate a simple act into something greater. They make me feel something. They challenge me to be more than I was yesterday.

Driving the Bentley Bentayga reminded me of this same duality. Does it get you from Point A to Point B? Yes, absolutely, but where my Ford Fusion might get the job done, the Bentayga does something more. Closing the driver-side door feels more like settling into the cockpit of something that defies gravity (or other laws). The engine purrs and roars like something wild. The gnurling on every knob delivers a tactile reminder that this is more than just a tool: it’s a finely-tuned instrument, even an art object. And sliding the shifter into Drive asks (every time) a question of my heart: What adventure do I want to go on next? What line will I draw on the map? This is more than a vehicle.

What adventure do I want to go on next? What line will I draw on the map?

When I first started writing with the Bentley fountain pen, I felt that same question. The top of the cap calls to mind the shifter in the Bentayga – metal gnurling around an elegant “B” – and posting it on the back of the pen, feeling the magnet catch to hold it in place, calls to mind that powerful shift into Drive. With the cap posted (mounted to the back) the pen balances perfectly in my hand, belying a surprising heft. It feels heavy and well-made and sleek and valuable. Anyone who took me up on my offer to test drive the pen was surprised by its weight. They seemed almost hesitant to put it to paper and write with it, handing it back to me with a quick reverence. Like the vehicle, the pen feels almost irreplaceable, and too dangerous to hold in your hand.

And that is maybe where I feel the most connection between these two objects. Each conveys a feeling that is greater than the sum of its parts: a weight greater than its mass, a smoothness smoother than its rhodium-plated nib should be, and a stylish flip to my “y”s and “k”s that wasn’t there before. (My driving in the Bentayga had a similar energy, I’m not embarrassed to say.) It’s no surprise to anyone, I think, that when you purchase a Bentley, you’re paying for more than the cost of rubber and steel and chrome. More than the value of most any other premium brand, in fact. The same is true for a luxury fountain pen. Steel and chrome and rhodium, plus a premium brand experience. So why pay so much more? 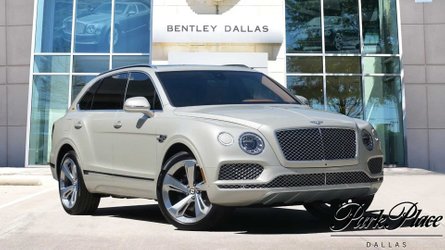 Bentley Bentayga Stetson Edition Is A Cowboy 'Hat' For One-Percenters
⠀ 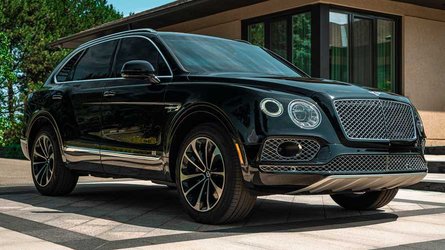 I’m not in the market for a luxury vehicle, especially not one in the Bentley family. But I frequent a pen shop or two, and I can tell you the Bentley fountain pen by Graf Von Faber-Castell will always have a prime parking spot in my garage.