The Lunar Rovers Of Apollo: First Cars Into Space 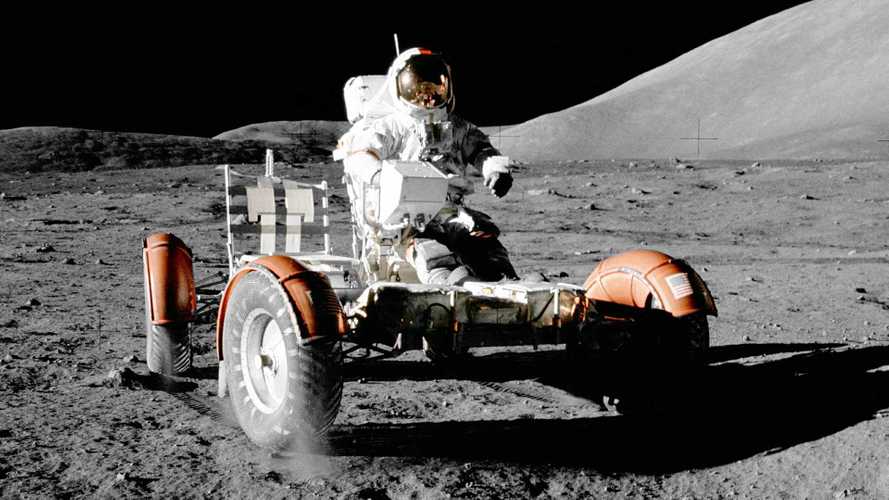 The Lunar Roving Vehicle was as simple as it was amazing.

20 July 1969: At 20:17:40 UTC the Apollo Lunar Module known as Eagle lands on the surface of the moon. Inside, Astronauts Neil Armstrong and Edwin "Buzz" Aldrin prepare to explore what Aldrin would later call the "magnificent desolation" of the Moon's surface. Armstrong would be the first man out the door, thus cementing himself forever in Human history as the first person to set foot on a surface other than Earth. Exactly fifty years have passed since that historic evening, and though we've yet to return to the Moon since Apollo 17's departure in late 1972, space research continues unabated aboard the International Space Station.

As miraculous as that first moon landing was, the arrival of the Lunar Roving Vehicle – LRV for short – gave astronauts tremendous capability to explore the Moon's surface far beyond Apollo landing sites. The first LRV joined the crew of Apollo 15 in 1971, and with two more blasting into space for Apollo 16 and the final lunar mission, Apollo 17. What were the first space cars like? Let's find out.

Fully Exposed Frame, But Nothing Like An Ariel Atom

The LRV was technically a car, in that it had four wheels and two seats. Fenders over the wheels kept dust from flying everywhere, and the suspension incorporated double-swing A-arms, so overall it had a rather car-like look. Otherwise, it was radically different, starting with the exposed aluminum frame that was completely absent of bodywork. It also had no interior or even traditional controls like pedals and a steering wheel. A simple T-lever accessible by either astronaut was used to control turning, acceleration, and braking.

It did have four wheels, but instead of using solid rubber tires, a metallic mesh tire was developed using aluminum wires. Small titanium blocks arranged in a V-shape served as the tread, and it worked extremely well on the Moon's very fine, powder-like surface. They didn't absorb impacts quite like air-filled tires, but astronauts remained secure in the LRV thanks to Velcro straps that kept them in the seats.

To ensure the LRV could traverse the decidedly off-road environment on the Moon's surface, four DC electric motors were installed in each wheel. That's right – the LRV is a four-wheel-drive EV not unlike many modern electric hypercars, but it's not nearly as powerful. Each motor produced the equivalent of just 0.25 horsepower. That power was transmitted to the wheels through a cycloidal gearbox with an 80:1 ratio, which allowed the rover to reach a top speed of approximately 8 mph (14 km/h).

Unlike modern EVs, the LRV was not rechargeable. Electricity was supplied via two zinc-silver batteries weighing a total of 119 pounds (54 kilograms). Total output was 8.7 kWh, and the LRV's range was just 56 miles (90 kilometers). Another interesting tidbit about the individually-powered wheels is that all four could turn, giving the LRV a turning radius of just 9.8 feet (3 meters).

Compact In Every Sense Of The Word

There wasn't much room to spare in Apollo space capsules, so by design, the LRV needed to be small. At just over 10 feet (3 meters) in length it was equal to a Mk1 Mini, though it was considerably lighter at just 463 lbs (210 kg). However, it was built tough – it could carry an astounding 1,080 lbs (490 kg), which is more than double its own weight. Furthermore, it was designed to carry that mass for its full 56-mile range-of-operation, but NASA limited the LRV to just 4.7 miles (7.6 km) from the Lunar Module. In case of mechanical failure, that was the maximum distance astronauts could walk to get back to base.

Astronauts drove the lunar rover manually, but it was equipped with an inertial navigator and an on-board computer that always relayed the Lunar Module's position and pointed the right direction home. LRVs were used on the last three Apollo Moon missions, and none failed to get astronauts back safely. There were some worrisome moments; lunar dust would obstruct the cooling radiators for the batteries, and two fenders broke while traversing the surface, requiring some on-the-spot repairs.

We Talk About Automakers In Space:

Boeing and General Motors were joint partners in building the LRV for NASA. In 1969, the entire LRV fleet had a price tag of $38 million, which in 2019 would equate to approximately $265 million. Four LRVs were built, three of which went to the Moon and are still there, having driven a combined total of 57 miles (91.7 km).

Among other things, the camera positioned on the front of the LRV for Apollo 17 was used to film the now-famous restart and ascent of NASA's final Moon liftoff. That LRV still exists at Taurus-Littrow – the location for Apollo 17's mission – and provided the batteries still hold some juice, there's no reason to believe it couldn't be driven today. That holds true for all the LRVs resting on the lunar surface, patiently waiting for someone to drive them home.

Gallery: Lunar Roving Vehicle, the one and only car on the Moon