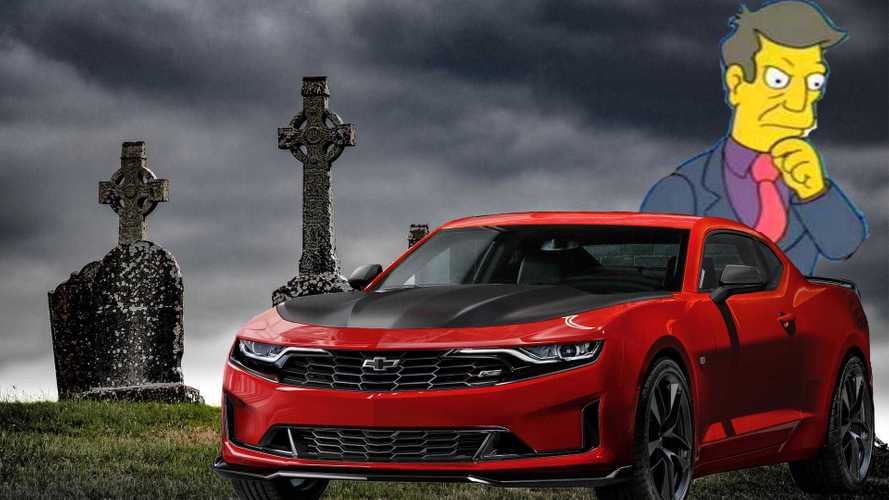 Keep it away from the glue factory, Chevy.

The 2019 Ford Mustang is a great pony car, but the 2019 Chevrolet Camaro is an even better one. Yes, it’s a smidge less attractive than its crosstown rival, but what the Camaro lacks in style it makes up for with its superior driving dynamics. That’s why I’m sad to read the bow-tie-brand will reportedly kill the model come 2023.

This isn’t the first time Chevy’s put its two-door pony car on the chopping block, either. The brand unceremoniously killed the model after the 2002 model year following 35 years of sales, only to bring it back less than a decade later as a retro-inspired companion to the more powerful Corvette.

The car that returned to us was a flawed – but damned attractive – one that sold like hot dogs at a baseball stadium, with Chevy delivering a peak of 88,249 Camaros in 2011. Good looks, however, couldn’t compensate for its near two-ton curb weight and unwieldy size. The fifth-generation Camaro was better than not having a Camaro, but it was a far cry from the driver-centric product enthusiasts yearned for.

That’s what made the sixth-generation Camaro such a breakthrough. Chevrolet listened to our gripes and built a Camaro that drove like no other vehicle in the segment. Trading the full-size Zeta architecture for the smaller Alpha platform brought about a Camaro that’s lighter, livelier, and more engaging than its predecessor. Short of a Mazda Miata, Toyota 86, or Subaru BRZ, there are few other cars that start below $30,000 and offer greater behind-the-wheel thrills than the Camaro.

Short of a Mazda Miata, Toyota 86, or Subaru BRZ, there are few other cars that start below $30,000 and offer greater behind-the-wheel thrills than the Camaro.

It’s all Camaro models, too. Sure, the 650-horsepower, $62,995 Camaro ZL1 brings additional excitement to the table, but even the lowly $25,995 Camaro 1LS with its hum-drum 275-hp turbocharged four-cylinder engine is an absolute joy to push to its limits. While the base Mustang’s 310-hp turbo four-cylinder is a bit more likable than the Camaro’s, the Ford’s chassis and controls aren’t nearly as sharp as those of the Chevy’s, which means it’s that much more necessary to spring for the more expensive, V8-powered Mustang GT or Shelby GT350.

Obviously, I’m not arguing against spending the extra coin on a V6- or V8-powered Camaro (you really should), I’m simply saying the Chevy’s underpinnings are so well-sorted that its weak, base powertrain makes only a small impact on the model’s overall driving enjoyment.

In spite of its more engaging persona, though, the latest Camaro is a relative sales flop. Last year, Chevy moved just 50,963 of the things, down nearly 17,000 units to the year before and a far cry from the 75,842 Mustangs sold in 2018. Even the Dodge Challenger, which lacks its competitors’ convertible body style, moved 66,716 units last year.

Ultimately, I can’t help feeling like Principal Skinner searching the 4-H Club for a truant Bart Simpson. Is it possible that I’m so out of touch with the buying preferences of modern pony car consumers? Perhaps. But every time I drive any variant of the current Camaro, I find myself thinking that maybe it’s not me who’s wrong, but the buying public itself.

No. It’s probably me.