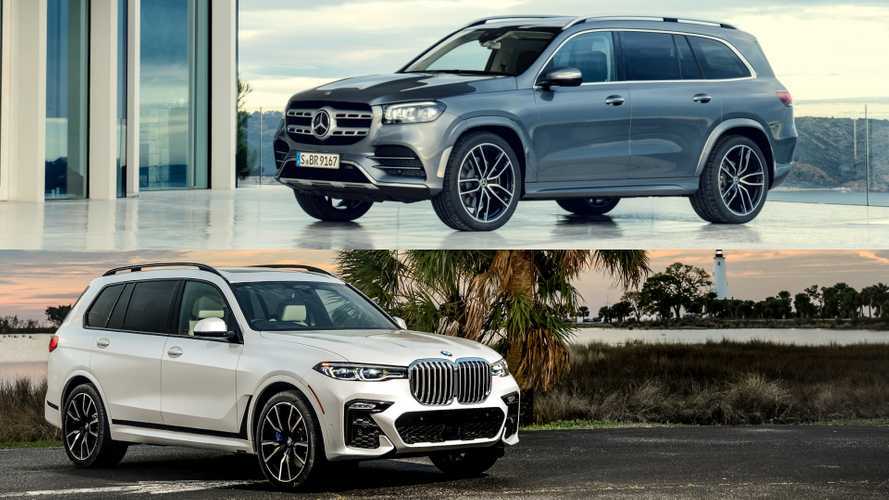 The BMW X7 has made quite the impact, and not just because of its outrageous gaping maw. The three-row Bimmer is a genuinely a great vehicle, as we found out. It’s comfortable, fun to drive, and depending on how you spec it, imposing as hell. But now there’s a new contender in town: the 2020 Mercedes-Benz GLS.

The new and wholly improved Mercedes-Benz GLS made its debut at the 2019 New York Auto Show. Not only is it better looking than its predecessor (and arguably the X7), but it’s larger and more powerful, too, belting out a whopping 483 horsepower (360 kilowatts) with the range-topping, twin-turbo 4.0-liter V8 equipped.

On paper, it all sounds promising for the big Benz. But how does the newcomer compare to the tried and tested X7? Take a look at these charts.

On paper, at least, the Mercedes GLS is the more powerful of the two. With either the entry-level inline-six or the more-powerful V8, the GLS improves upon the X7's output by 27 horsepower, 39 and 37 pound-feet of torque, respectively. It has more gears, too – a nine-speed automatic over the BMW's eight-speed. But both offer all-wheel drive. What matters, though, is how these two crossovers actually put the power down.

The X7, with the smaller inline-six, is a bit quicker to 60 miles per hour than the GLS (5.8 seconds versus 5.9). But the two are identical with the larger V8s (5.2 seconds). Not that anyone will or should be topping out their three-row SUVs, both the X7 and GLS are electronically limited to 130 miles per hour (209 kilometers per hour). But the most important numbers aren't performance. What buyers in this segment will really car about is interior volume and passenger space.

The Benz is clearly the bigger of the two crossovers. Though Mercedes hasn't released crucial figures like towing, payload, interior volume, or cargo capacity, it's a safe guess that the GLS will be a bit more spacious than the X7. The Mercedes is more than three inches longer than the X7 overall with a wheelbase more than an inch longer. It's taller, too, by nearly an inch. The only measurement where the BMW excels is width; the X7 is more than an inch wider than the GLS.

Both the Benz and the BMW come in either six- or seven-seat configurations. This is the first time Mercedes offers the GLS with six seats, removing the second row for a pair of captain's chairs instead. The GLS also gets an easy entry function to the third row for 2020, and a third row capable of carrying passengers that are up to 6-foot 5-inches tall.

We'll be curious to see how much more spacious, if at all, the GLS is compared to the X7 once all the numbers are out.