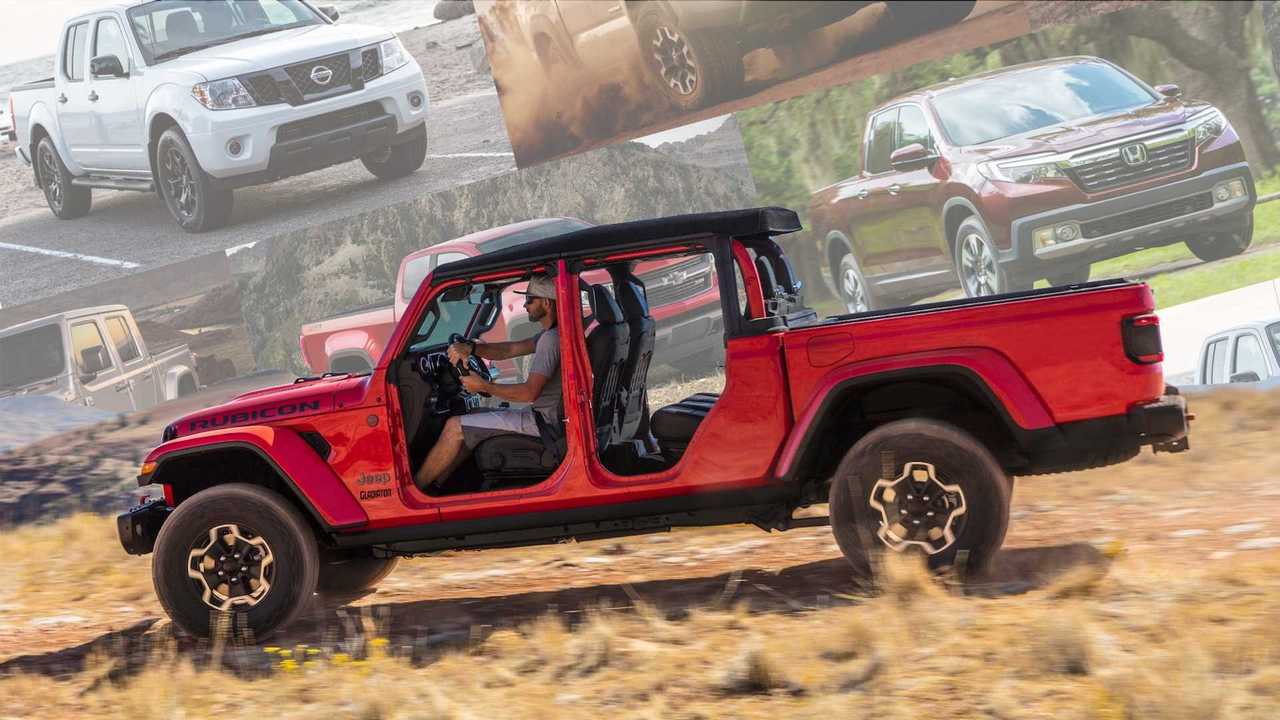 With a new Ford Ranger and Jeep Gladiator in the mix, we collected all the specs for a side-by-side review, including the fuel economy.

Update: Since the Gladiator's fuel economy available, a new row in the table below now compares its mileage to the competition.

The midsize pickup truck segment is particularly competitive, and with Ford and Jeep adding new fuel to the fire with the Ranger and Gladiator, buyers in North America have never had so many truckin’ choices before them. Trucks have long been extremely popular in the U.S., but the resurging midsize market is packed full of some seriously capable machines that are surprisingly comparable to fullsize pickups in some areas.

The New Kids On The Block:

That might make for an interesting future comparison, but to help you wade through the field of smaller selections, we gathered all the midsize players currently available to U.S. shoppers. That equals seven trucks, with the Gladiator and Ranger joined by the GMC Canyon, Chevrolet Colorado, Honda Ridgeline, Toyota Tacoma, and Nissan Frontier. With the exception of pricing on the Gladiator (which should be revealed before sales begin in spring 2019), we have all the primary stats right here for a quick-and-easy, numbers-to-numbers comparison.

As you review the chart, there are some points worth mentioning. The current crop of trucks from U.S. automakers are towing champs with maximum ratings of 7,500 pounds or more. Achieving that capability, however, generally requires a two-wheel-drive model with the smallest cab option available. The outlier in the group is the Honda Ridgeline with a rating of just 5,000 pounds, but at the same time, the Ridgeline is the only truck to offer a full-time all-wheel-drive system instead of a traditional four-wheel-drive setup. If you’re seeking pickup capability with a car-like feel, the Ridgeline could be your ticket to ride.

The Midsize Twins From GM:

2017 GMC Canyon Denali Review: What am I paying for, again?

For now, at least, diesel fans are limited to the Chevrolet Colorado and GMC Canyon. Jeep will eventually offer a 3.0-liter diesel for the Gladiator, but availability for that engine is unknown at this point. The Ranger could also get a diesel – it’s currently offered in Rangers outside the U.S. market – but thus far it’s not confirmed. Similarly, the Ranger is the only truck that doesn’t offer a V6 option, though the turbocharged 2.3-liter EcoBoost four-cylinder is gutsy for its size.

Trucks From The Far East:

When it comes to price, all the models are fairly competitive save for the Ridgeline, which starts just shy of $30,000. That’s a bit misleading, however, since many of the base-model pickups in the segment are seriously entry-level rigs at that starting price, whereas the Honda still delivers a 3.5-liter V6, nice wheels, and a comfortable array of equipment. We suspect most buyers will at least opt for mid-level trims where prices quickly shoot well beyond the $30,000 mark.

Whether you're seeking a heavy hauler or a good-looking off-roader, a work truck, or a suave sedan with a pickup bed, the midsize segment has got you covered.