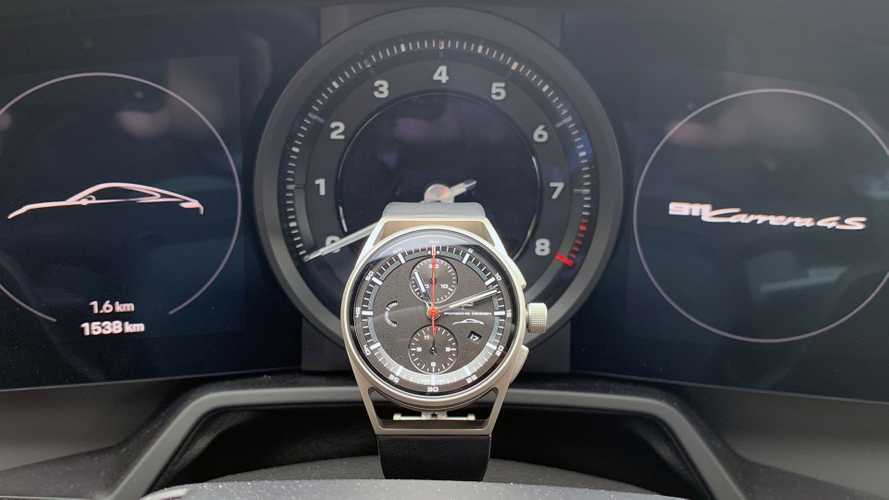 Performance, On The Wrist

There are automakers with branded products, and then there is Porsche Design. The German outfit is a wholly owned subsidiary of Porsche A.G. And when it comes to wristwatches, the company is nearly as pioneering as its car-building sibling. PD rolled out its first watch in 1972, and then made waves teaming with giant IWC to build the first black watch and the first watch with a titanium case. PD has also built dive watches for the German military. It may not carry the name recognition of Rolex or Omega, but Porsche Design watches are no joke.

And PD’s latest watch, much like the car that inspires it, is no joke either. A limited-edition offering called the 911 Chronograph Timeless Machine, it coincides with the launch of the new latest generation of Porsche’s iconic sports car. And to see how the two matched up, I borrowed the 911 Chronograph for a trip to Valencia, Spain, where I was testing the 2020 Porsche 911.

Porsche Design’s build quality is equal to Porsche the automaker. The case is bead-blasted titanium with a scratch-resistant sapphire-glass crystal and a clear case back, also sapphire glass. There are elegant lugs – the bits the strap attaches to – and slim pushers for the chronograph functions, while the strap itself features a deployant buckle and the same leather that Porsche uses for the 911’s seats. Little features like the 9 and 11 in the minutes subdial are nice, and I like the placement of the date window at 4 o’clock.

But the 911’s black dial, black strap, and titanium case have an under-the-radar look compared to similarly priced watches. There’s no polished metal or ceramic bezel to draw the eye (actually, there’s next to no bezel, period). I wish Porsche Design had added a tachymeter scale, too. This is supposed to be a driver’s watch, and although tachymeters are antiquated features, the same could be said for sticking an engine in the trunk. And while Porsche Design says there’s luminescent material on this watch, I never saw the lume actually kick in. Contrast that even with a relatively cheap watch – a $140 Seiko 5 diver, for example – and the lack of luminescence was disappointing.

I also had numerous fellow watch enthusiasts criticize the 911 silhouette below the Porsche Design logo, with many of them saying the watch would look better and cleaner without it. I disagree, though. Please give me all the 911 stuff on my 911 watch.

That said, I’m not sure of the point of the rotating subdial at 9 o’clock – a small slot spins a page with the words “Timeless Machine” and “Limited Edition.” With the lack of traditional seconds hand beyond the chronograph function, I guess it’s a sign that the watch is actually running; it’s not especially useful. And as silly as it sounds (and despite it being the tagline for the new 911) it's a little silly to stamp the words “Timeless Machine” on a machine whose sole purpose is to tell time.

Why yes, let’s stamp the words “Timeless Machine” on a machine whose sole purpose is to tell time.

The 42-millimeter case size is among the most common in the world of horology – and it’s dwarfed by the dinner-plate-sized watches that are in vogue today – but it looks and wears far thicker than its 14.9-mm thickness might indicate. This watch is skinnier than the 16-mm Omega Speedmaster, yet it looks and feels far more substantial than its 42-mm rival.

While wearing it through Europe’s airports, around Valencia, and to the Circuit Ricardo Tormo, I was constantly worried about banging the pricey Porsche watch into something. That’s at least partially down to its slab-sided case. Take the Speedmaster, for example – it’s almost steeped, with its convex-shaped crystal blending into the rotating bezel, and then into the actual case itself. It’s thicker, but the layering hides it. The 911 Chronograph is essentially one, unbroken piece of titanium, and there’s no hiding that.

The 911 Chronograph is easy to read, thanks to the white contrast on the hour and minute hands and the bright red second hand, and all three are skinny enough that it’s easy to read the subdials at a glance. The lack of brightwork might be a turnoff for showoffs, but it’s helpful from behind the wheel – unlike a Speedmaster or Daytona, there’s nothing shiny to reflect light into the driver’s eyes.

While the 911 Chronograph doesn’t feature a flat-six under its hood, the movement – the bunch of springs and gears that does the ticking and tocking – is no less iconic. Actually, that’s not exactly correct. In terms of sheer ubiquity, the Valjoux 7750 movement in this watch is more like a small-block Chevrolet V8 than it is a 911’s flat-six. It’s a workhorse that either features in numerous other high-end watches or serves as the base for movements from high-end brands – Omega, Panerai, IWC, Sinn, and Hamilton all use variants of the 7750. In other words, this movement is no slouch, nor will it be difficult for your local watch shop to service. Functionally, there’s a 48-hour power reserve on this self-winding mechanical movement.

The watch is, as the name suggests, a chronograph. That means it includes a stopwatch function, in addition to its typical time-telling abilities. The stopwatch can record seconds with the red hand, up to 30 minutes with the 12 o’clock subdial, and 12 hours via the 6 o’clock subdial, while the watch itself ticks at a steady 28,800 vibrations per hour. None of this is outside the ordinary, nor is the 100-meter water resistance. The pushers for the chronograph movements are stiff, but also immensely satisfying to engage.

The C.O.S.C. has not named the 911 Chronograph Timeless Machine a certified chronometer.

We did not perform a test of the 911 Chrono’s accuracy. This is down to timing (puns!) – I wore it to the 2019 Detroit Auto Show and then left immediately after for the 911 drive in Spain, where I had to switch the timepiece from Eastern Standard Time to Central European Time. Despite this jumbling, it seemed to keep good time. That said, the Contrôle Officiel Suisse des Chronomètres (C.O.S.C.) – the Swiss folks that decide whether a watch is an official chronometer – have not named the 911 Chronograph Timeless Machine a certified chronometer.

My main problems with this watch, beyond the perceived size, are price and perception. While far more affordable than the gold standard for a driver’s chronograph, the Rolex Cosmograph Daytona, the Porsche Design 911 Chronograph’s $5,411 starting price is not cheap. In fact, it plays at a price point with plenty of popular timepieces.

The most obvious competitor has a pedigree equal to the car this watch represents – the Omega Speedmaster Professional, which starts at $5,350 for a 42-mm example. Ironically, the Tag Heuer Carrera is worth consideration, as well, with members of that family slipping in above and below this watch’s starting price. Even Porsche Design itself offers more reasonably priced chronographs, with a number of timepieces ranging from $4,200 to $4,800. And on the very low end, Bulova offers a Speedmaster-like chronograph for around $540, while Citizen has a range of affordable chronos that look good but don’t cost a lot. While the 911 Chronograph is plenty handsome and feels suitably premium, I never felt like I was wearing a $5,400 watch (except when I was trying to avoid bumping it into anything). And my fellow watch enthusiasts on the 911 drive (there were numerous writers with Rolexs or Omegas on their wrists) felt the same – the general consensus was that we’d all have been satisfied paying $2,000 to $3,000 for the 911 Chronograph.

But, this watch does have exclusivity working for it – Porsche Design is only building 911 examples. It won’t even be remotely common, unlike the aforementioned competitors. And for the Porsche enthusiast that has it all, it’s the kind of accent piece that may draw admiring glances with the local club.

By no means is the 911 Chronograph Timeless Machine the kind of high-end watch that will appeal to everyone, but like the 911, it’s a piece that has a very specific sort of shopper in mind. If you already have an array of timepieces in your watch box, this well-built automatic is the perfect accessory to rear-engined performance.