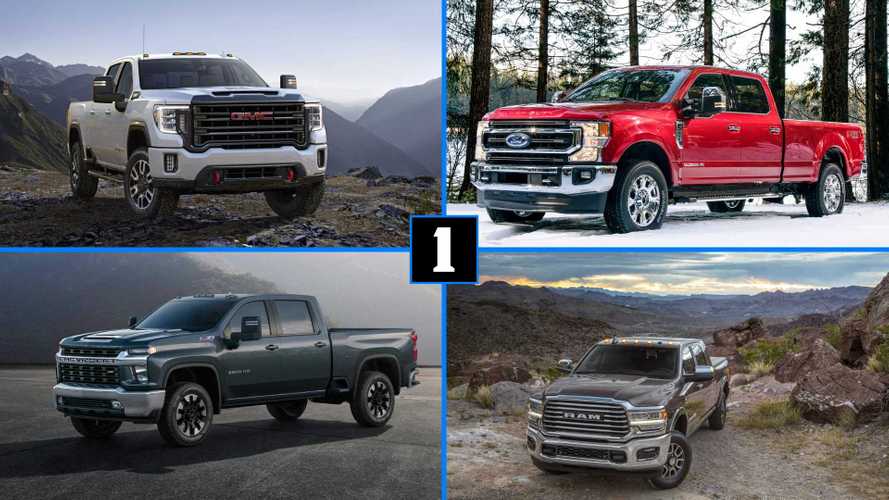 Detroit automakers have all-new heavy-hitting pickups. Here's how they stack up on paper.

With the official unveiling of Ford's updated Super Duty pickup, all three Detroit automakers now have fresh blood on the table for the 2020 model year. For quick reference, here are the debut posts for each truck, ready for browsing at your leisure.

HD All The Things:

Though all the covers have been lifted, automakers love to be shy about hard-and-fast statistics. As such, we're still waiting on figures from Ford, including the Blue Oval's new 7.3-liter V8 gasoline engine. Ford says it will offer class-leading horsepower, which would suggest it eclipses Ram's 410-hp Hemi V8. Speaking of Ram, the 6.7-liter Cummins diesel is available in two different tunes, which is why there are three sets of figures for power and torque. We will update this chart as more information becomes available.

One thing we can do is check out each truck's exterior styling cues, now that the camo coverings are free and clear. Big and bold is certainly a common theme among all automakers, though beauty is definitely subjective. Here's a quick look at each truck with some astute Motor1.com observations.

Amazingly, some might say the new Ram HD models are conservatively styled compared to the rest of the field. We've heard from more than a few people that feel the new Ram – both in half-ton and HD trim – are handsome machines. For that matter, we've also heard the word boring used a few times.

What can be said about the new Silverado HD that hasn't already been tossed around the internet? Polarizing is probably a kinder reference compared to some of the things we've heard. The grille certainly is massive, and from a head-on angle there's really no way to make this truck look good. We're going to reserve further judgment until we see it in person, which should happen shortly at the Chicago Auto Show.

The new GMC Sierra HD is a stablemate to the Silverado, and while its face is equally massive, it could be argued that it's the prettier of GM's heavy-duty pickups. Like the Chevy, the Sierra looks like it was styled entirely with rulers, but GMC does offer the cool six-way tailgate for easier bed access.

Fans of the previous Super Duty should be right-at-home with the new model. Whereas GM and Ram underwent significant changes, the 2020 Ford sports a minor facelift, and we do mean minor. The grille and headlights are new, striking a balance between the massive faces from GM and the cleaner lines at Ram. The big news with the Super Duty is what's under the hood, but for now, we'll have to patiently wait for official figures to come from the Blue Oval on power and capability.