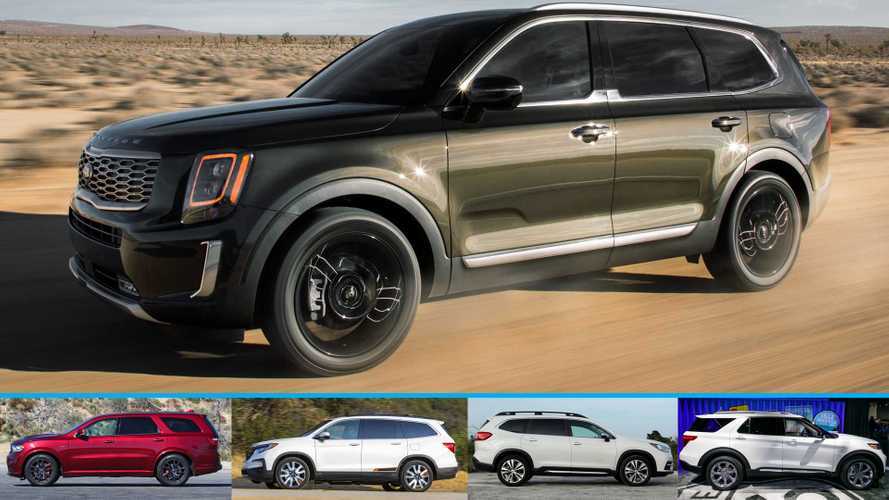 There’s a new player in the three-row SUV community. Kia technically dropped the Telluride on us last September, but it wasn’t a production-spec model. The real deal finally arrived in Detroit, and it certainly grabbed our attention. We also noticed it grabbed the attention of you, the Motor1.com audience, and we’re pretty sure we know why. The Telluride represents uncharted water for Kia, a company best known for small, fuel-efficient vehicles. The full-size SUV market is incredibly competitive; even seasoned veterans like the Ford Explorer have difficulty standing out. Does Kia’s freshman effort in the eight-passenger SUV fold even stand a chance?

The Telluride In Detail:

That’s why we’ve compiled information on some of the Telluride’s primary competition for a bit of statistical analysis. Real-world evaluation will come later when we have a chance to drive the SUV and put it through its paces. For now, let’s see how the big Kia looks on paper with the aforementioned Explorer and a few other rivals – namely the Dodge Durango, Honda Pilot, and Subaru Ascent

When it comes to powertrain, the Telluride is pretty much right there with the pack. Torque is a bit on the low side, matching the Honda Pilot for the lowest of the bunch but the spread from worst to first is close. Same goes for horsepower, though the Telluride ranks in the upper echelon on that front.

49 Photos
Of course, that comparison applies only to the base model Explorer and Durango. In higher-level trims, both models easily out-perform not just the Telluride, but the Pilot and Ascent as well. Then again, the extra power does add to the price tag, and though we don't yet know where the Telluride will stand on that front, history suggests it will trend on the lower side of the spectrum. Similarly, fuel economy statistics aren't yet available for the new-for-2020 Explorer or the Telluride, so we'll have to wait for comparisons there as well.

The Ford Explorer Is All-New Too:

2020 Ford Explorer: Live From The Detroit Auto Show
From a performance standpoint at least, it seems Kia did its homework before stepping into the most cutthroat automotive segment of them all. We will have to wait for a first-drive to take a closer look at features and equipment, though Kia promises a plethora of technology ranging from a head-up display to downhill braking control, and a full suite of driver safety/assist systems.
Production models are expected to arrive this spring.
++21