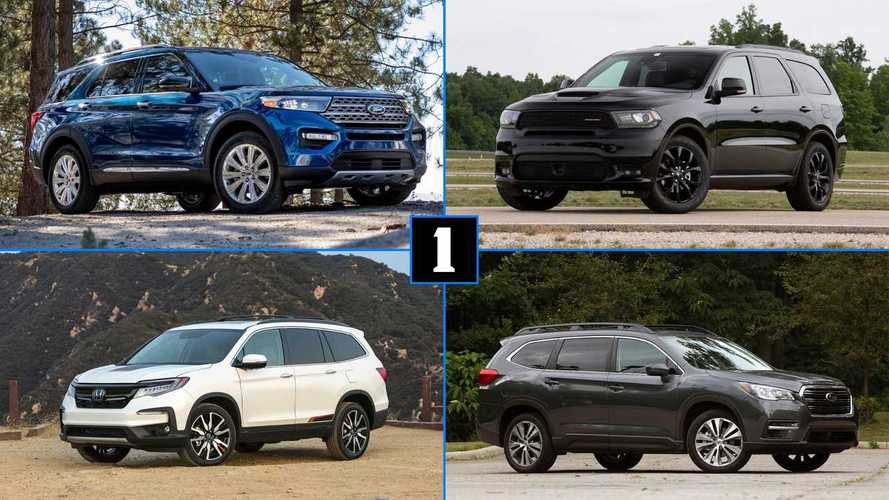 Ford's new rear-drive Explorer is more competitive than ever.

The 2020 Ford Explorer is a return to form for the Blue Oval’s three-row crossover. Resting on a new rear-drive-based platform and boasting a more spacious interior, the latest Explorer offers more capability and comfort than ever before. But how does that compare to its closest rivals? You know, crossovers such as the Dodge Durango, Honda Pilot, and Subaru Ascent.

This is a big class, and as much as we’d love to dive into the numbers of every full-size crossover, we happen to have families who need us to do things around the house. Thus, we’ve opted to compare the Explorer to these four contenders for a handful of reasons: The Durango also rides on a rear-drive-based platform, the Pilot is one of the segment’s top sellers, and the Ascent is a recent comparison test winner.

Whereas the Durango and Pilot rely on six-cylinder engines for motivation, the Explorer and Ascent utilize forced-induction fours. While the Subaru offers reasonable torque, it is the least powerful of the group. The Explorer, on the other hand, offers the most grunt of the group, as well as the most gears (10!). Still, the Durango is only a few ponies and pound-feet of twist behind the Explorer, and its naturally aspirated V6 affords it a maximum towing capacity of 6,200 pounds – 900 more than the Explorer! The Ascent and Pilot bring up the back of this quartet, but both models’ 5,000 pounds of maximum towing capacity is nothing to scoff at. And like just about every Subaru sold today, the Ascent’s ace up its sleeve remains its standard all-wheel-drive system.

Unlike the Honda and Subaru, the Dodge and Ford are also available with even beefier engine options (and we’re not even including the sportier SRT and ST variants of these vehicles in this piece). The Durango works with the muscle car adage that there’s no replacement for displacement, and its 5.7-liter V8 engine kicks out a healthy 360 horsepower and 390 pound-feet of torque. The Explorer, on the other hand, opts for forced induction, and its twin-turbocharged 3.0-liter V6 is projected to produce 365 horsepower and 380 pound-feet of torque. Thanks to its smaller displacement, the slightly more powerful Explorer is likely to be the more fuel efficient of these two engines. Still, with no EPA ratings released for the Ford, it’s impossible to fairly compare these two crossover’s fuel economy figures.

Nonetheless, the Durango stands strong as the towing champ, and its Hemi V8 engine helps it manage a truck-like 7,400-pound towing capacity. The six-cylinder Explorer makes do with a towing capacity of just 5,600 pounds.

While the Ford may fall to the Dodge in the way of towing, it bests it, as well as the Honda and Subaru, when it comes time to carry cargo. With 87.8 cubic feet of space behind its front seats, the Explorer’s cargo bay tops the Ascent’s by 1.3 cubes.

Of course, that extra space comes at a cost and the rear-drive Explorer starting price is costlier than even the all-wheel-drive Ascent. Still, we’re hopeful the Ford’s higher price nets a crossover that feels a step or two above the class. We’ll find out when we get a chance to spend time behind the wheel of the Explorer in the coming months.