5 Japanese Sports Cars From The 90s That Made Ferrari Nervous

In the 1990s, Japanese sports cars had a golden age.

The Acura (or Honda for those outside of North America) NSX sat a rung above the other vehicles on this list in terms of its price, but the coupe brought cutting edge technology to the table that made the extra money worthwhile.

Honda created a bespoke 3.0-liter V6 for the car. The mill produced 270 hp (202 kW) at launch for the 1991 model year, and it hooked up to a slick-shifting six-speed manual, although a four-speed automatic was also available.

Honda mounted the powerplant behind the driver and clothed the entire car in edgy bodywork. The exterior panels were aluminum to shed pounds. The automaker even used a Cray supercomputer to figure the exact right amount of material necessary to create parts with the right mix of stiffness and strength for their weight.

When it came time to tune everything, Ayrton Senna offered a helping hand. The result was a supercar that was every bit as good as anything Europe could come up with at the time.

The NSX is still here:

The Mazda RX-7 received its third (and likely last) generation for the 1993 model year, but it went out with a bang. Like the 300ZX, Mazda ditched the previous gen's wedge-shaped look for a more organic, undulating appearance.

Available with a five-speed manual or four-speed automatic, all variants used the latest version of Mazda's 13B 1.3-liter rotary engine. It now packed a set of sequential turbos to make the most out of the Wankel, and the mill carried a 255-hp (190 kW) rating.

While not as powerful as the others, the RX-7 was capable of sublime handling, and Mazda offered optional suspension packages with even more aggressive layouts for folks who didn't mind dealing with a harsh ride to make the coupe turn even more sharply.

The chances of a new RX-7 are slim:

In Japan, the 3000GT carries the GTO moniker. While this is a somewhat generic term for a homologated race car (which the 3000GT wasn't), famous models like the 250 GTO and 288 GTO give the moniker a very close connection to Ferrari. The marketing team at Mitsubishi must have known this when picking the name.

The 3000GT VR4 was about more than power, though. It featured all-wheel drive, four-wheel steering, and multi-mode dampers for better handling. Plus, there were active aerodynamic elements that adjusted the front splitter and rear spoiler at high speeds.

Mitsubishi isn't reviving the 3000GT, either:

Mitsubishi 3000GT Rendered As If It Were Alive Today 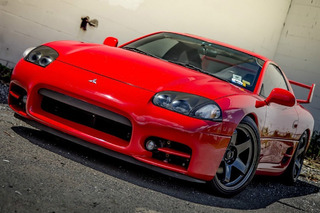 Nissan had already been building the Z car for decades when a new generation 300ZX arrived for the 1990 model year, but the latest model was a showstopper by eschewing the previous angular look for a much smoother appearance.

No new Z car for a while:

If the Nissan GT-R didn't already take the nickname Godzilla, then the fourth-gen Toyota Supra is the next Japanese car that most deserves the monstrous moniker. By modern standards, 320 horsepower (239 kW) from a 3.0-liter twin-turbo doesn't sound like much, but keep in mind early examples of the Ferrari 348 had 300 hp (224 kW) and later updated pushed American examples to 312 hp.

Twin-turbo models were available with a six-speed manual or four-speed automatic.

The base fourth-gen Supra had a naturally aspirated 3.0-liter inline six that made 220 hp (164 kW). Buyers could get it with a five-speed manual or four-speed automatic.

Did you hear? A new Supra is coming:

Toyota Supra Is Back On The Track In Latest Teaser

By the 1990s, Japan's automakers had enough experience building great performance vehicles that they were able to use the decades of expertise to create real challengers to the best that Europe could offer. Suddenly, Ferrari drivers had to keep a nervous eye out for hardcore machines from Honda, Mazda, Mitsubishi, Nissan, and Toyota.

These Japanese brands built sports cars that were just as attractive and technologically advanced as their European counterparts. Plus, they often came with a lower purchase price and even better reliability. Ferrari had to improve or get out of the way of its new rivals.

Luca di Montezemolo, president of Ferrari at the time, knew there was trouble, too. For example, the boss told Britain's Telegraph in 2011 about buying a Ferrari 348 a year before his return to the Prancing Horse. He hated the car. After taking a job, he told the engineers: "No, the 348 is not a Ferrari for me."

Today, the Ferrari has less to worry about from Japan, but check out this list to remember a more exciting time.