Some of the greatest restomod classics in the world attended SEMA 2018. From 1,000bhp Chargers to a giant Jeep, here's our top 10

This car is a fantastic fusion of past and present. Using a replica GT40 at its base, the tuners fit a new 3.5-liter twin-turbo EcoBoost V6 from the new Ford GT into this classic shape. The whole car is topped-off with a take on the new GT's Le Mans livery.

Get all the details about the Future GT Forty:

This extreme 1,000-horsepower restomod is a nod to the 426-cubic-inch V8 hemi engine that was dubbed "elephant" for its strength. The 1968 Dodge Charger is an evil looking thing, especially in its deep gray with a wide hood scoop. The inlet feeds cool air to a new 7.0-liter (426-cubic-inch) supercharged crate engine derived from the Hellcat.

Hellephant On Wheels: Up Close With Mopar's 1,000-HP SEMA Car

This one will definitely split opinions! It might look like a modded 300 SL Gullwing, but it actually started as a Mercedes-Benz SLK, now know as the SLC. The wheelbases of the two are very similar, so a fiberglass replica body was easy to fit.

The SLC's future is in doubt:

Mercedes Admits It Hasn't Decided What To Do With The SLC

General Motors wanted to showcase its most powerful crate engine every in style. Taken straight from the latest Corvette ZR1, the 775-hp engine was dropped into this classic Chevy Chevelle to create an awesome restomod.

What a way to show off a new engine:

How handsome does this look? Finished with a modern take on the classic livery, this iconic rally car now packs over 700 horsepower from a turbocharged 2.0-liter engine. Little surprise then that it comes straight from Ken Block's Hoonigan collection, who's also working on a new Group A Escort RS Cosworth right now.

See the rest of Block's cars:

All 18 Of Ken Block’s Crazy Cars And Trucks, Ranked
⠀

While other MGB projects at SEMA possessed huge American engines, some love has to be given to this well-executed restomod. A greater focus has been put on weight saving as opposed to power when it comes to this British sports car.

MGs to keep you going: 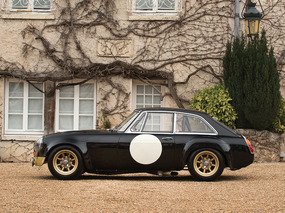 Love or hate the film franchise, this Dodge, belonging to Dom Toretto, drew quite a crowd at SEMA. Starring in the eighth installment in the series, the modified muscle car appears to have a rear-mounted jet turbine. In reality, the movie car featured a 500-hp V8.

This thing is a little monster! Its small proportions somehow provide the room to shoehorn a Roush version of Ford's 5.0-liter Coyote V8 into the engine bay. Another point of interest on this MG is that the paint comes from the palette of a 2001 BMW M3.

Stop laughing! This mutant Jeep proves that bigger is indeed better when it comes to 4x4s. Its vast scale means rear-wheel steering is a necessity.

The future for smaller Jeeps:

This car might just be our pick of the show. While modified classic Ferraris are a point of contention, many of the components for this car come from other iconic Ferraris. Can you spot the bits from a 288 GTO?

This Incredible Ferrari Enzo Mural Is Made Entirely of Golf Tees

Everything You Missed At FerrariChat Miami 2018

The SEMA Show in Las Vegas, Nevada, is a Mecca for fans of modified cars with tuners from all over the world gathering to showcase their latest creations. From new crate engines to modified muscle cars, you'll find enhanced versions from every creed of the automotive landscape. Here are our top 10 machines from SEMA 2018.